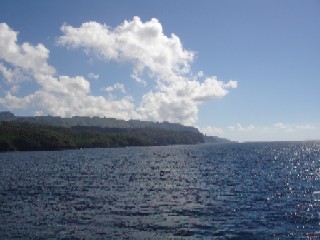 We are slowly moving in to Hiva Oa. It’s a very hot day but we’ll take that over rain any day. We were told that the weather on this island is usually bad, and we’re lucky to be here on such a pleasant day. 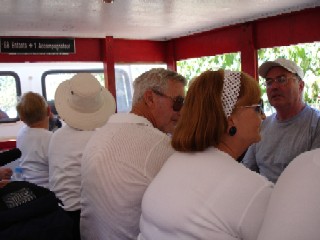 After breakfast we took the tender over to the island, and then hopped on this school bus which took us downtown (about 2 or 3 miles away). It was crowded in this bus, but it sure beat walking the whole way in this heat.

A shot of our ship while on the bus.

We got dropped off here at this big grassy area. We were told a show was going to start shortly. We scrambled to find a place in some shade to watch it from. 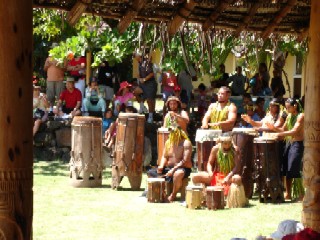 The show is getting ready to start. The locals started playing songs on these drums. It was quite good. 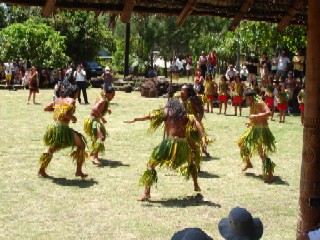 Here are the guys doing some tribal dances. Most dances focused on hunting and being a warrior. One dance was about a man who climbed to the top of the mountain on the island and went into a cave and planted a stick in there. Lots of grunting and yelling in these dances.

Next the girls came out to join them. It was very good show as each dance told a story. 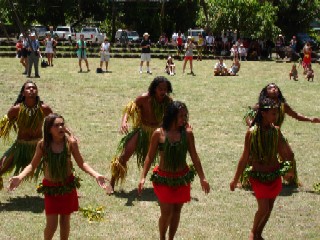 The men would typically make deep grunting noises and would jump up and down and the girls would hula and make gestures with their hands. 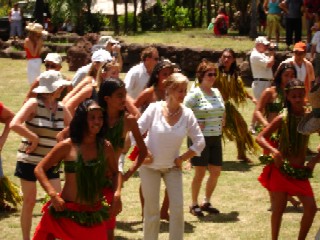 At the end of the show they invited our fellow passengers to participate. It was too hot for us, but some did it. It was entertaining and funny. 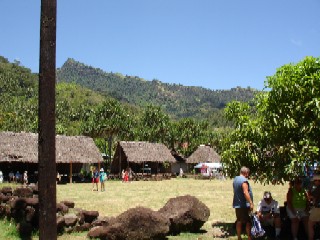 Surrounding the grassy area were these huts and inside people were selling stuff. It’s the same stuff that was sold on all the other islands, and the prices were about the same – way high. So we decided not to buy anything here. 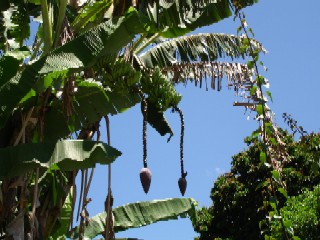 This is a banana tree that was growing near the Paul Gaugin museum. 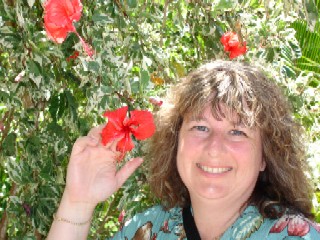 This is the entrance to the Paul Gaugin museum. The museum was very small and we weren’t really all that interested in seeing it so we snapped this picture and kept on walking. 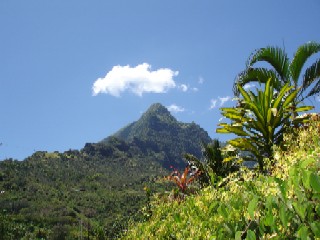 This is the mountain top they were dancing about earlier. This picture doesn’t really do a good job capturing how tall it is. It’s really amazing and beautiful. 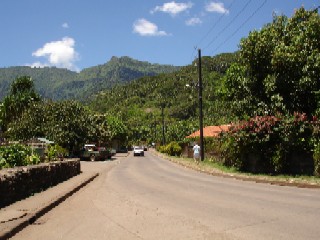 Walking along a road in Hiva Oa. This is a nice island where the roads were nicely paved and the people were friendly. No wonder Paul Gaugin settled here. 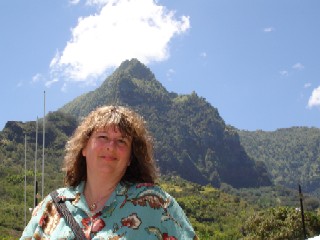 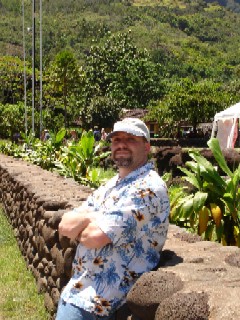 Just some photos of us enjoying the day. 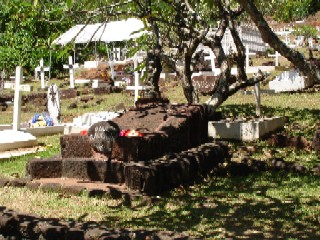 We took a taxi over to the cemetery where we snapped this picture of the grave of Paul Gaugin. The cemetery wasn’t in very good condition, but it seemed like lots of people would come and put fresh flowers on the graves. 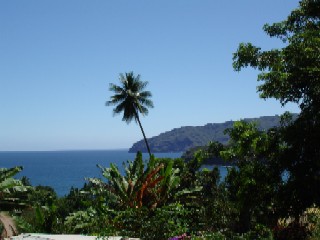 The views on this island were simply amazing. 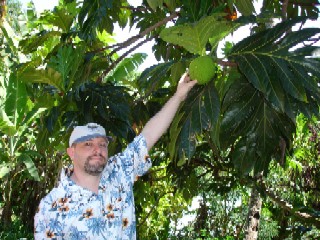 We found this breadfruit tree along the side of the road. No, we didn’t pick it. The entire island was filled with fruit trees.

We walked to this black-sand beach. This was our view with the ship in the distance. We took off our shoes and walked around in the water for a while. It was very very nice. 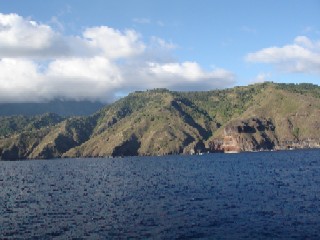 Back on board the ship, saying goodbye to Hiva Oa as we slowly pulled out of the area. One other thing to mention is that when we took the tender back it was a pretty rough ride. The waves had really picked up throughout the day. 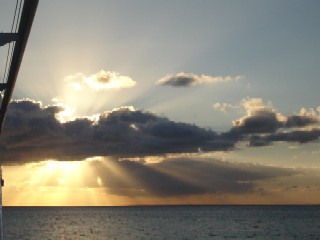 Cruising ahead as the sun slowly sets. 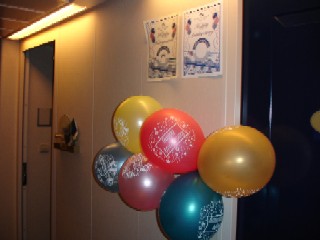 What’s this? Now next to our “Happy Anniversary!” sign, there’s a “Happy Honeymoon!” sign. Huh? Does anyone find this confusing? We thought it was funny, so we left it. 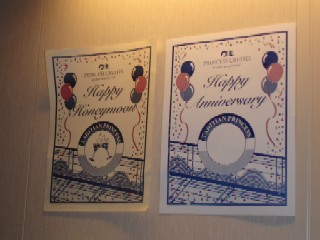 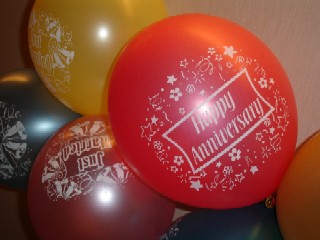 Some “Happy Anniversary” and “Just Married” balloons all tied together. Someone’s confused somewhere. 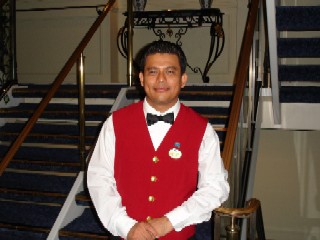 This was our cabin steward Leopoldo. He was a very friendly guy and gave us little chocolates on our pillows every night. What a guy!

Time for dinner at Sabatini’s! This is the Italian restaurant on the ship and it’s got a cover charge of $20 per person but who cares? We have shipboard credit! Thanks Art & Cheryl! We had NO idea what we were in for at this place. We came pretty hungry not hungry enough. It started with a plate of appetizers piled high with at at least a dozen different anti-pasta type foods, and then ANOTHER plate with caviar and other fish, and then ANOTHER plate of mussels with deep fried cheese and potato pancakes and crab cakes. We aren’t even at the main course yet! We were completely full. Well, here comes another plate with a slice of pizza and some spaghetti. We hardly ate any of it. Then they asked if we wanted some soup and salad! Are they crazy? Who can eat all of this? Then finally we got our main course which was lobster, prawns, scallops, and some other fish. It was a very very very good dinner.

We got some Lemon Cello to wash it all down with, it was very good. We got to keep this little shot-glass. Lot’s of alcohol in that drink..Weee! 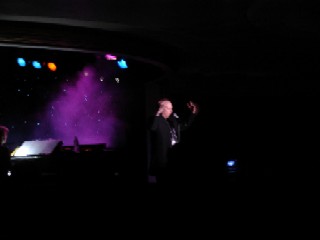 The late night show consisted of this singer who did lots of songs from the 50’s and 60’s and also mixed in a few newer songs. He was a great singer and a funny guy.

Tomorrow is another day at sea with the final art show! Bingo! All sorts of stuff going on. How much would we spend at the art auction or how much will we lose a bingo? Will we win a 3rd free painting? Is the suspense killing you? Is anyone reading this?