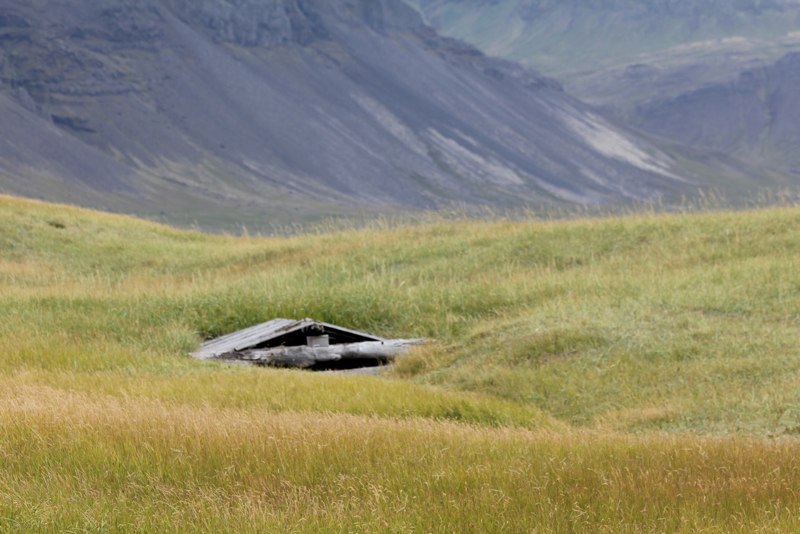 2 Days at sea, and then arrive at Grundarfjordur, Iceland

We tend to not take many photos when we are having days at sea, because we are just doing things around the ship. We had two days at sea in a row. The first day we slept in late, and then spent a relaxing morning walking around the ship, goofing off in the casino and things like that, then in the early afternoon, we went to another art auction. Adam has really taken a liking to the art of Sharie Hatchett Bohmann, in particular a painting of a beach scene at night, with a table, two chairs and a bottle of wine….it looks like you could walk into the scene and have a very nice evening in that spot.  The problem is, the only copy of that painting they have on board is the original, and it’s over six thousand dollars. That’s a bit much for a painting when we have so many projects around the house that we’d like to get going like the patio cover and new flooring, so we’ll likely just admire her work and study up on her pieces and maybe get one of her originals on a future cruise. 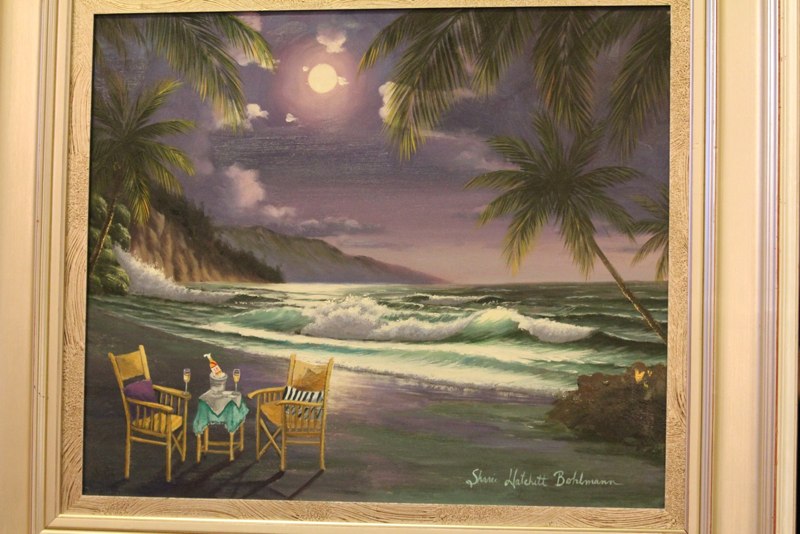 The painting we liked

We had a nice chat with some of the folks who are also our dinner-mates, they like the art auctions, so we chatted about art for a while.  They have several originals and they have met many of the artists as well.

Not much else noteworthy about the first day at sea. Yesterday, the second day at sea, we entered the slot tournament and Adam did great! He was in first place by a LOT going into the final round, but unfortunately, the final round doesn’t take into account what your score was, you all start at zero again.  He didn’t win the final round, but he got a nice Princess “Player’s club” tee-shirt, which is what he said he was hoping to win in the first place.  After the slot contest, it was time for the Champagne Fountain.  We viewed that, and then marveled at the fact that it was midnight, and still very light outside…guess that’s what they mean by ‘Land of the Midnight Sun.”  I wouldn’t say it was sunny, but it wasn’t dark either.  We had an early port the next morning, so we needed to get some sleep, which was hard to do when it was still so light out. 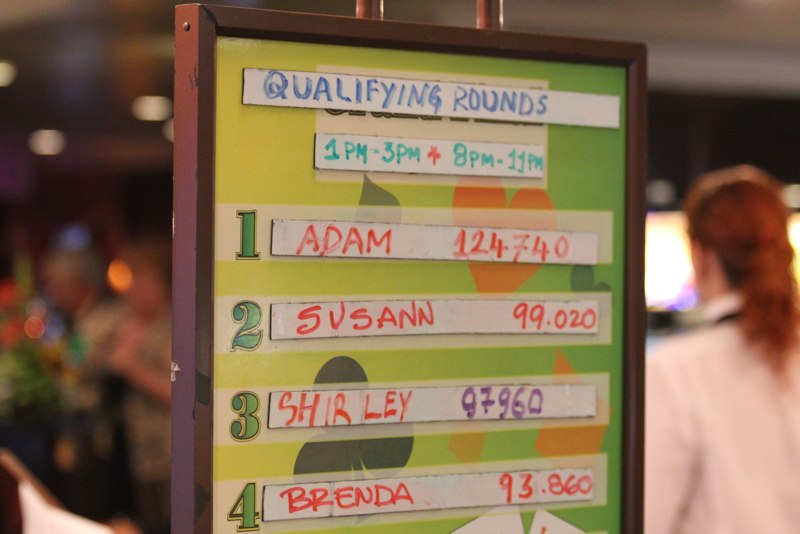 Adam’s name at the top of the competition list 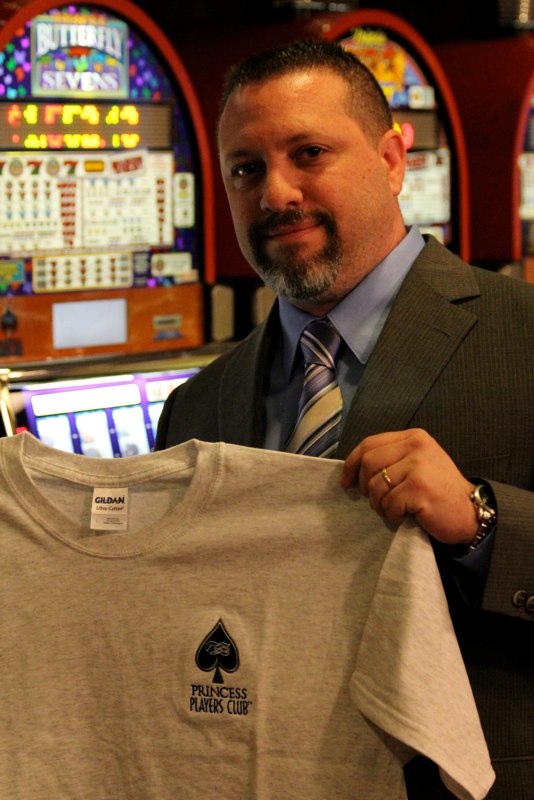 Adam and the shirt he won 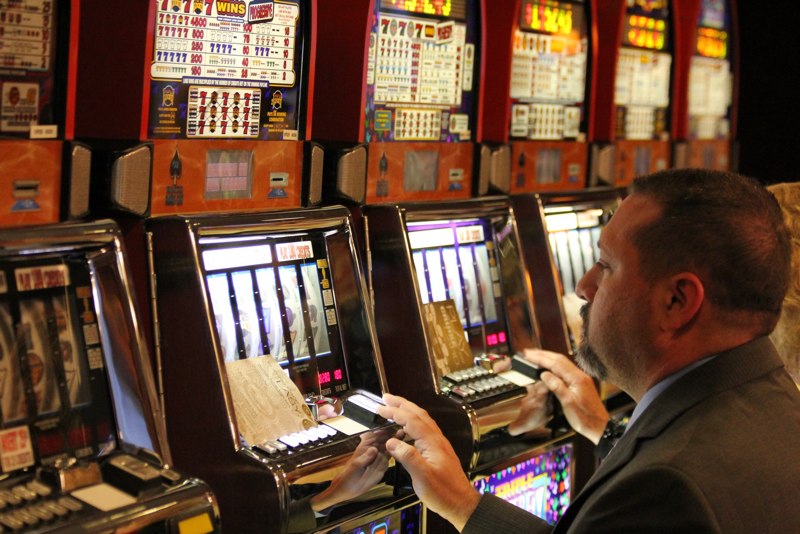 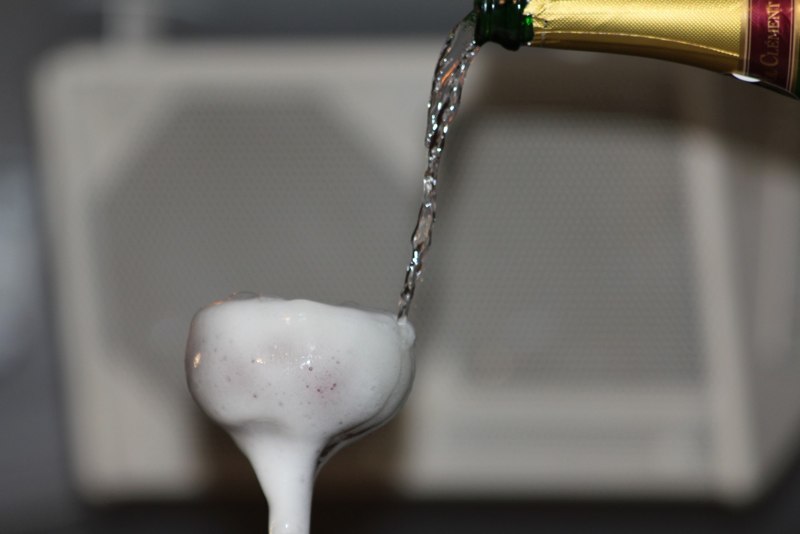 Pouring champagne for the cascading fountain 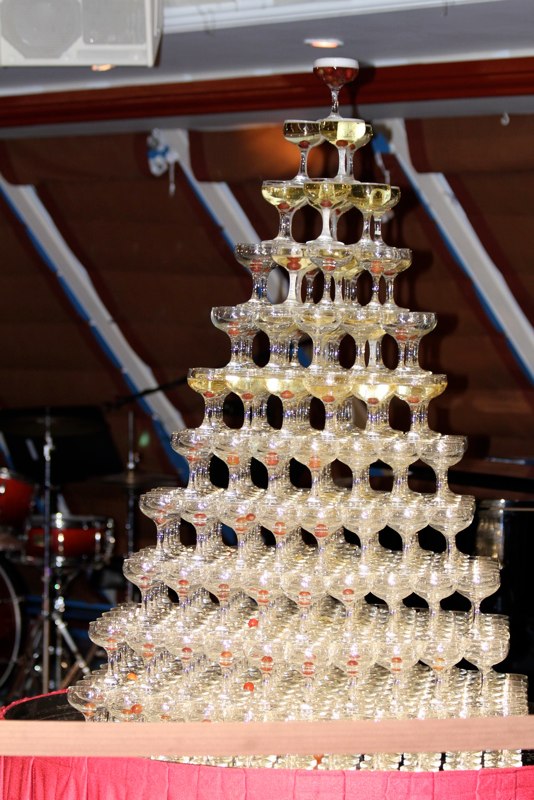 This morning, we got up early for our tour of Grundarfjordur, Iceland.  Our tour met at 8 am and as soon as we disembarked the tender, our bus was waiting for us.  We went to many places that I have no idea how to pronounce, but we saw so many beautiful sights that between Adam and I we took nearly 500 photographs….thank goodness for digital cameras, I can’t imagine paying to have all of those developed! 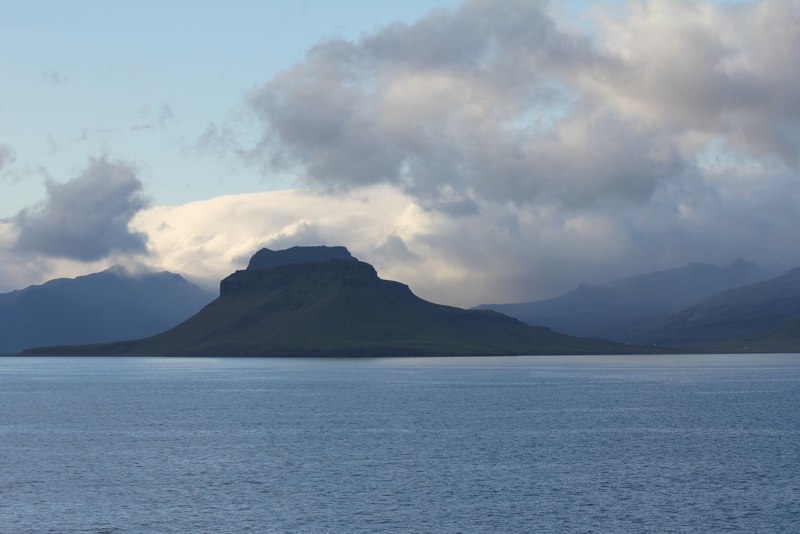 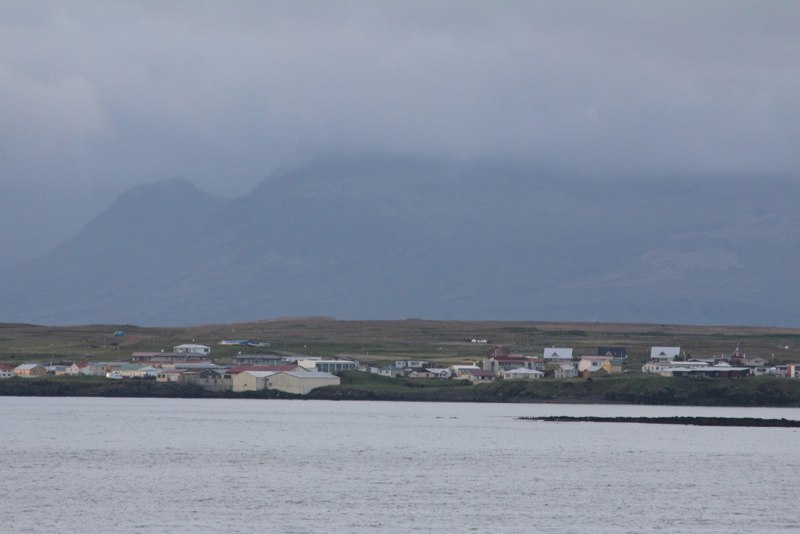 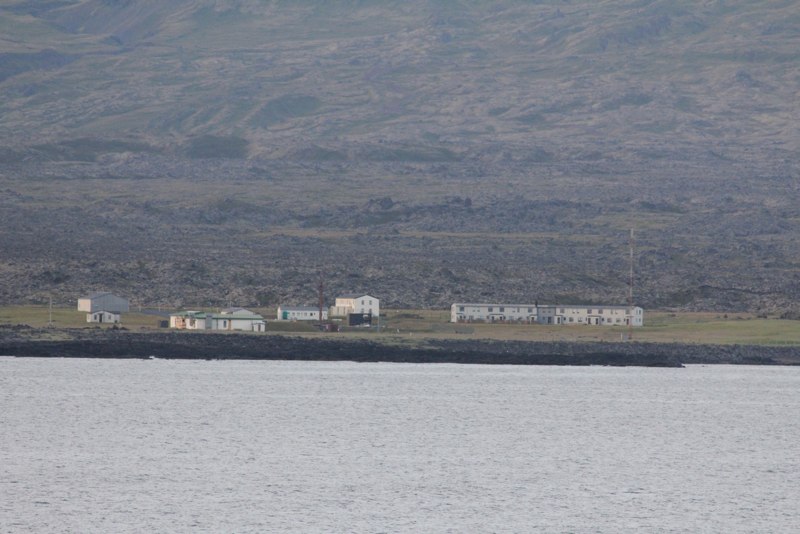 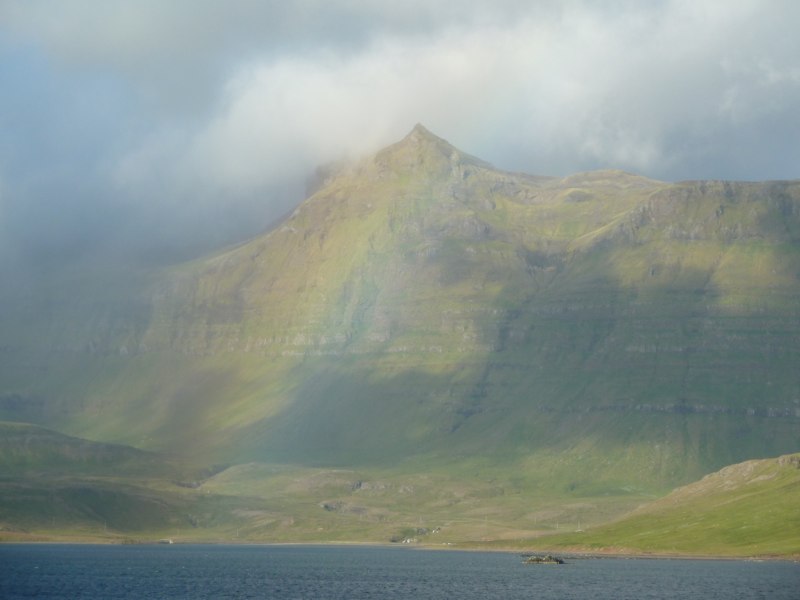 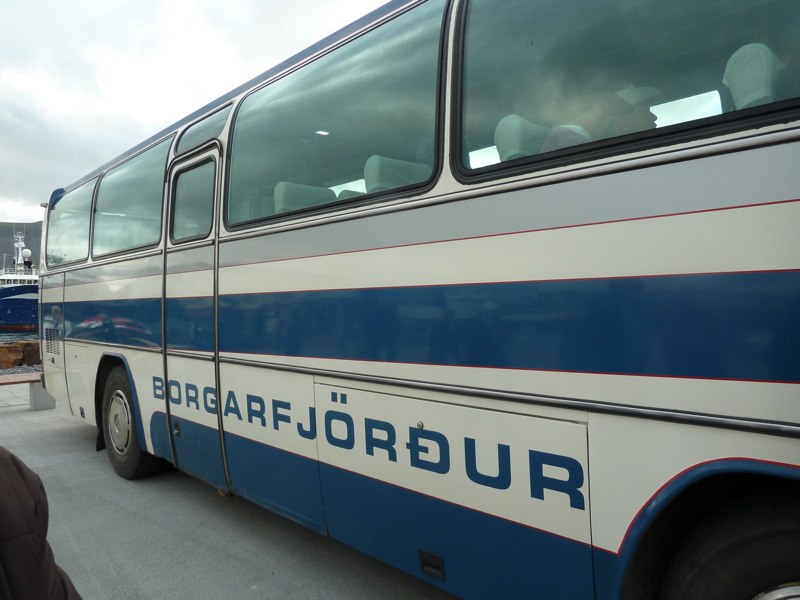 We took a tour called “Snaefellnes Peninsula” and our tour guide told us many of the local folktales of the history of the area.  The main story she told us was about a man who was half human, and half troll who came to the area with his family.  His sons pushed his daughter off a cliff where she landed on an iceberg and floated to Greenland.  When he found out about it, it threw them each in a canyon (that has since been named after the son that was tossed into it) and then he grabbed his belongings and headed into the glacier…and was never seen again, but they say his spirit remains.  She told us a few other folktales too, and in those, there were people thrown into the canyons as well… guess it is a good idea to stay away from the canyons in Iceland if someone is upset with you! 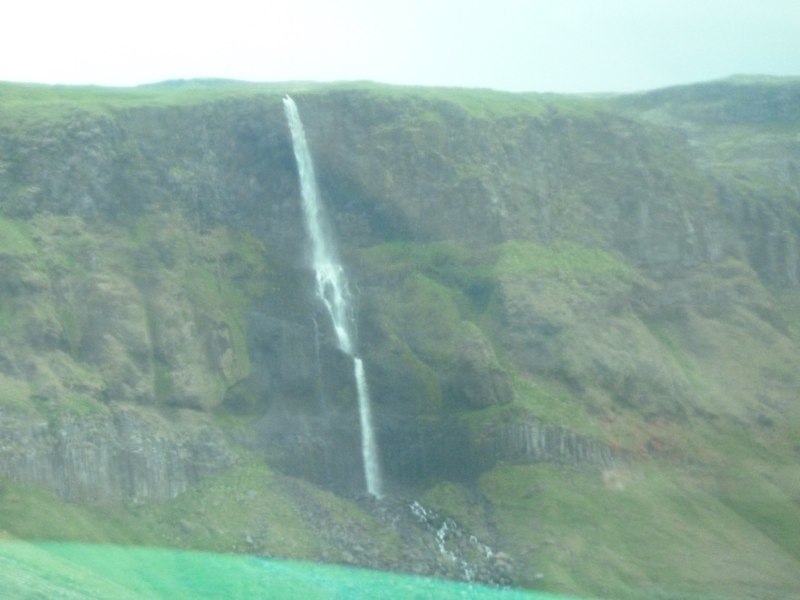 One of many waterfalls we saw 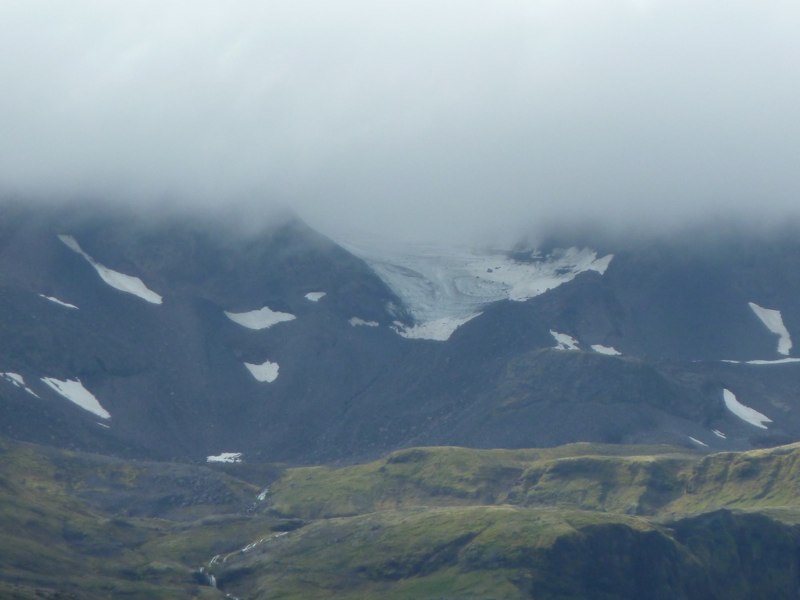 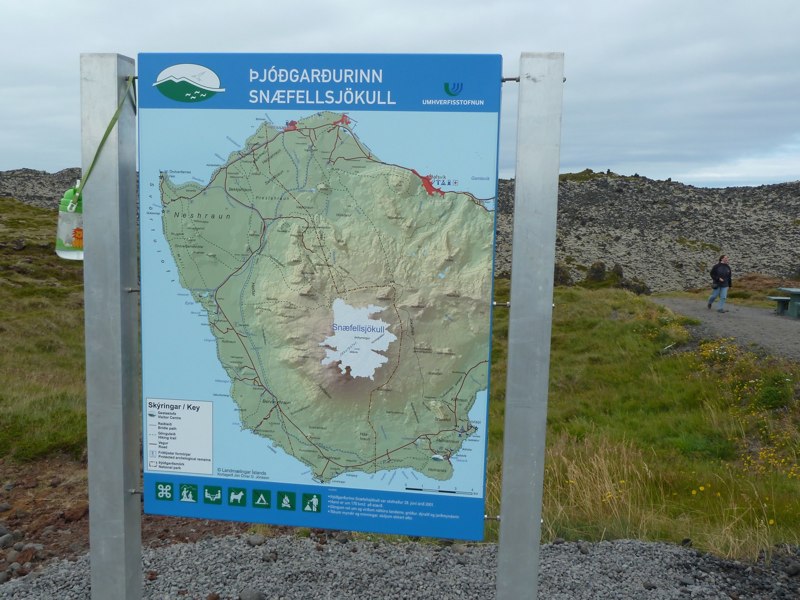 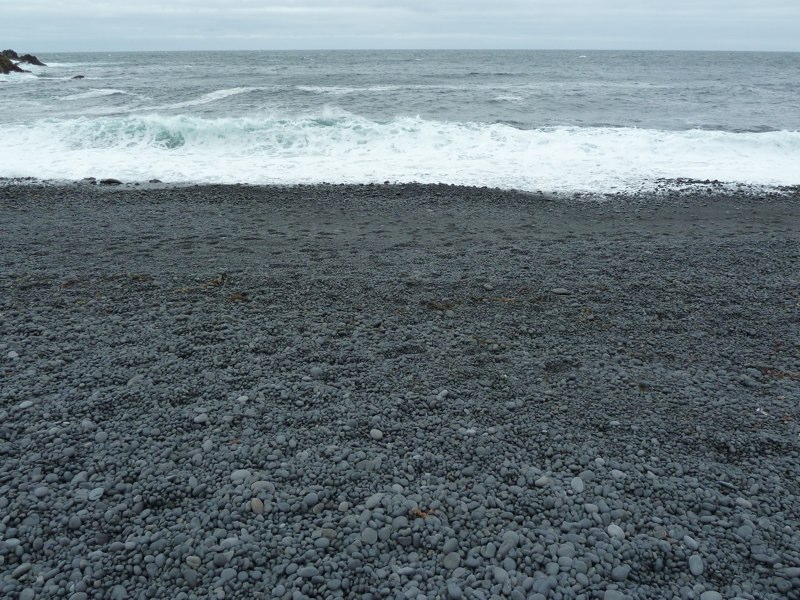 This beach was made of all sorts of small round rocks. 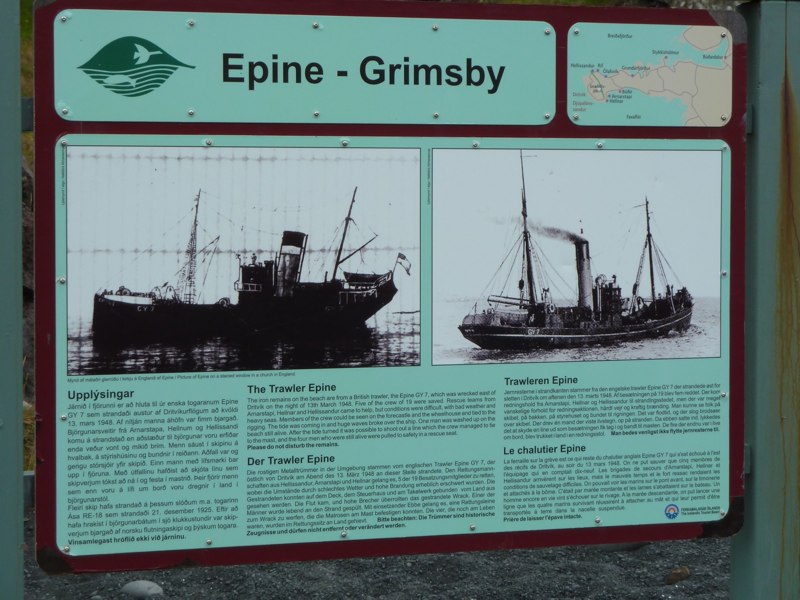 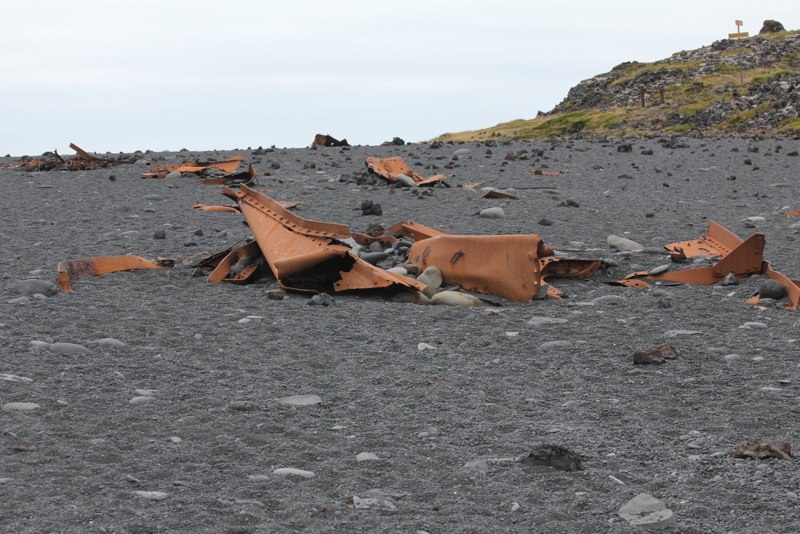 Ship parts rusting on the short 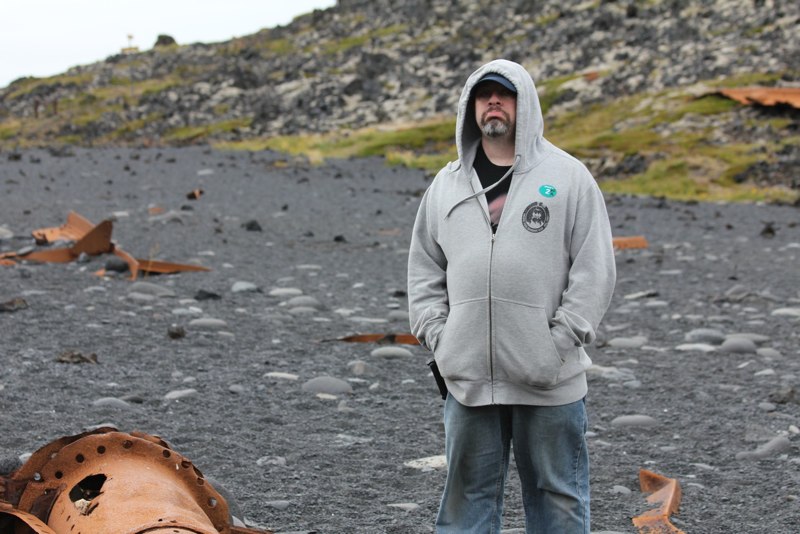 Adam is sad about the wrecked ship

Adam at the Troll man statue 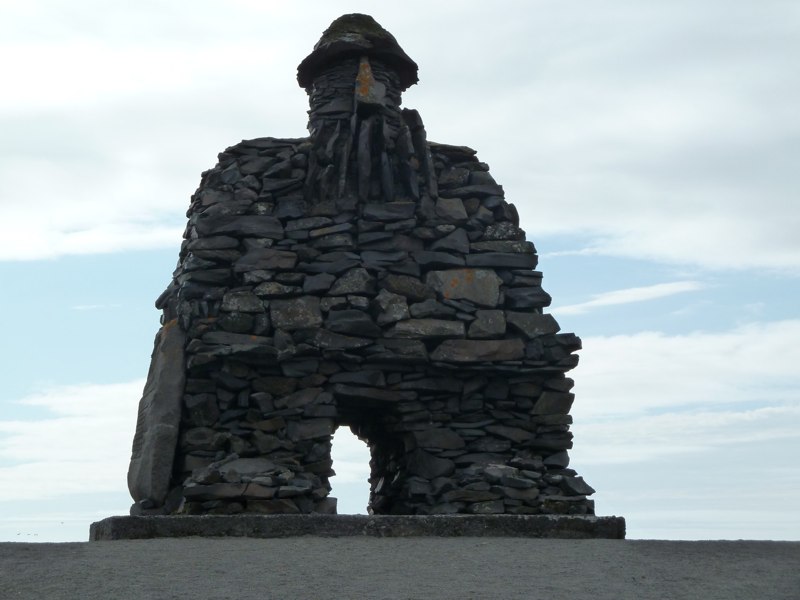 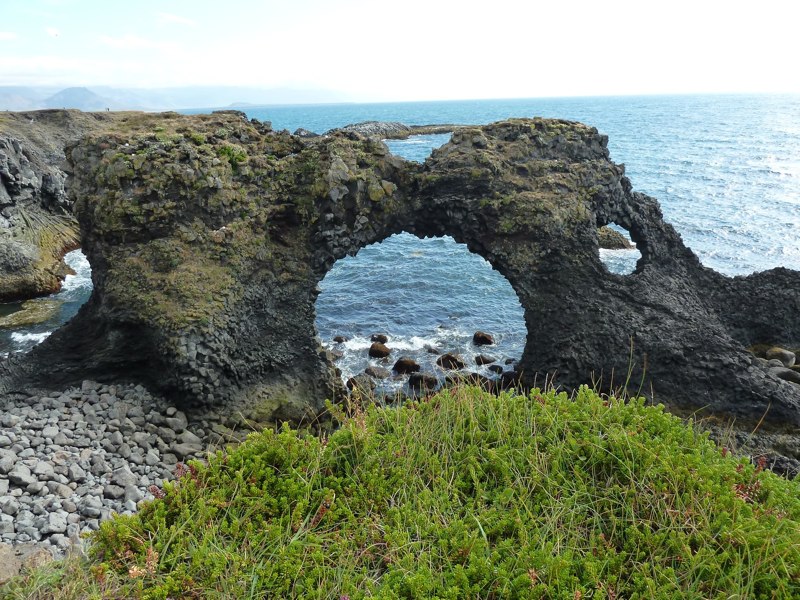 Rock formation at the cliffs

This area was so pretty – we took too many photos! 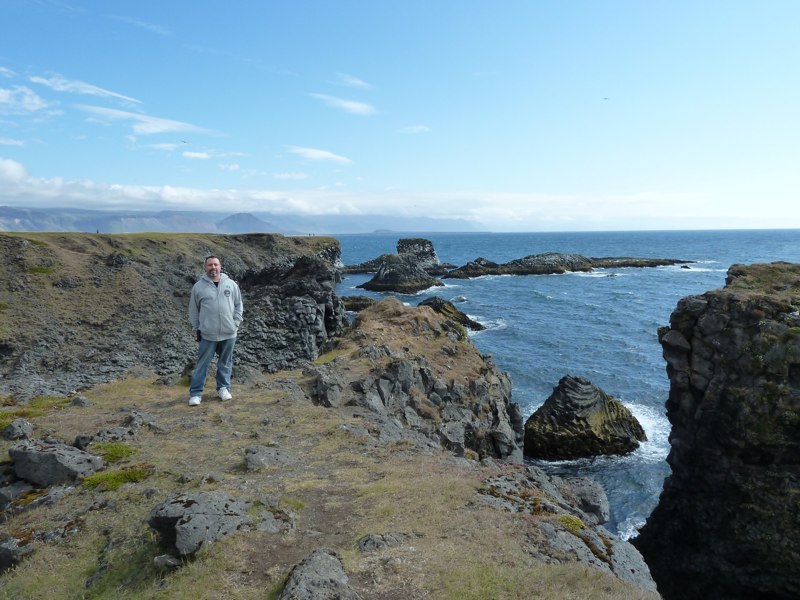 Adam at the cliffs 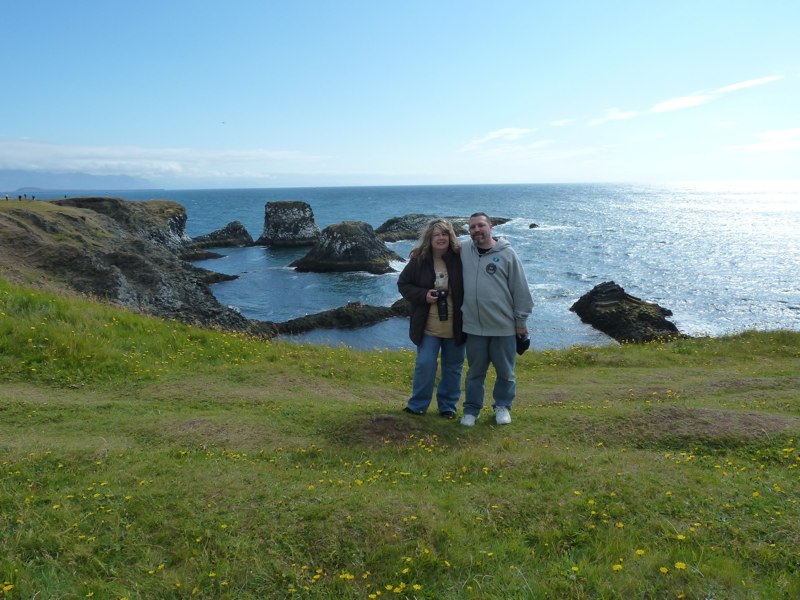 Among the top 10 most beautiful places I’ve ever seen. 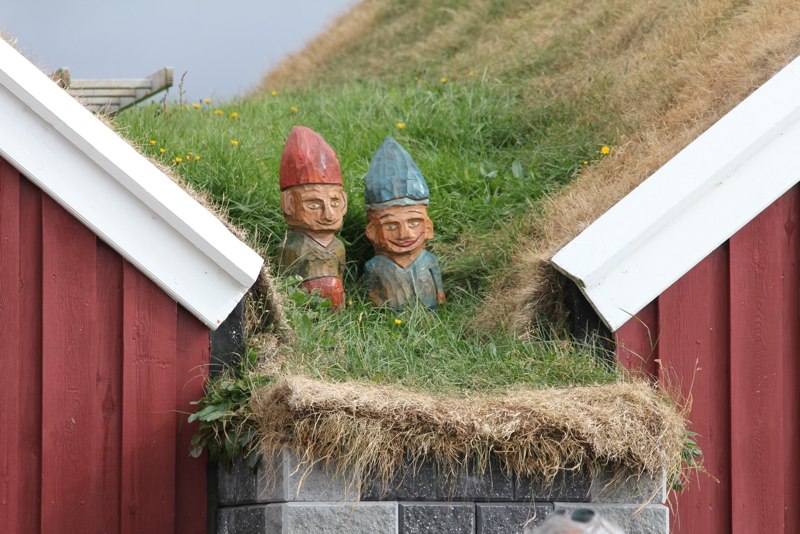 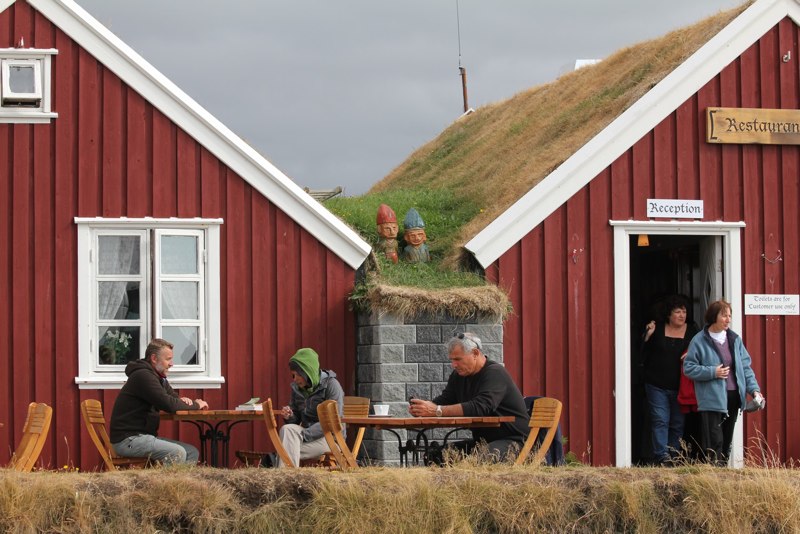 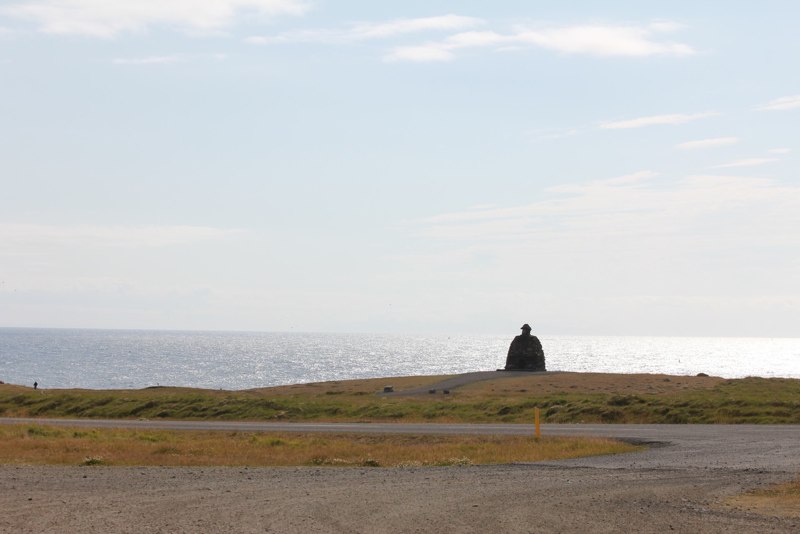 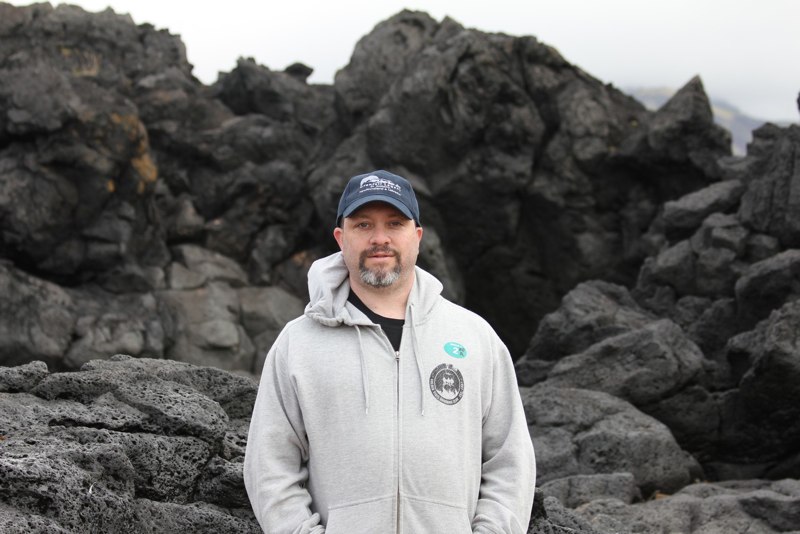 Adam by a lava-field on the beach

We went to an area called Arnastapi where there is a bird colony, we saw yellow sand beaches, round-rock beaches, and old shipwreck, gorgeous shoreline with rock formations and sea caves, and we saw a large statue of the troll-man himself (I don’t remember his name, and I couldn’t pronounce it anyhow!). When the tour was over, we took a tender back to the ship, had a light lunch and then headed back to shore to explore a bit more.  The whole town was getting ready for a local festival that starts tonight.  Each section of the town was themed with a color. There was a green section, a red section, a blue section and a yellow sections.  People had decorated their homes, yards and vehicles with their color.  We saw one woman who had tied green plastic cups to various branches in her bushes lining her yard.  She was also in the process of tying green ribbons around every-other slat of her fence.  On the blue side of town, people had draped blue ribbons through their front staircases and one home had even put together a blue stuffed ‘man’ dressed all in blue and tied him to the front of their balcony.  He smiled at everyone driving past.  In the red section of town we saw a house with red hearts affixed to the front of it….it seems the whole town participates and it looks like they really have fun in the process. 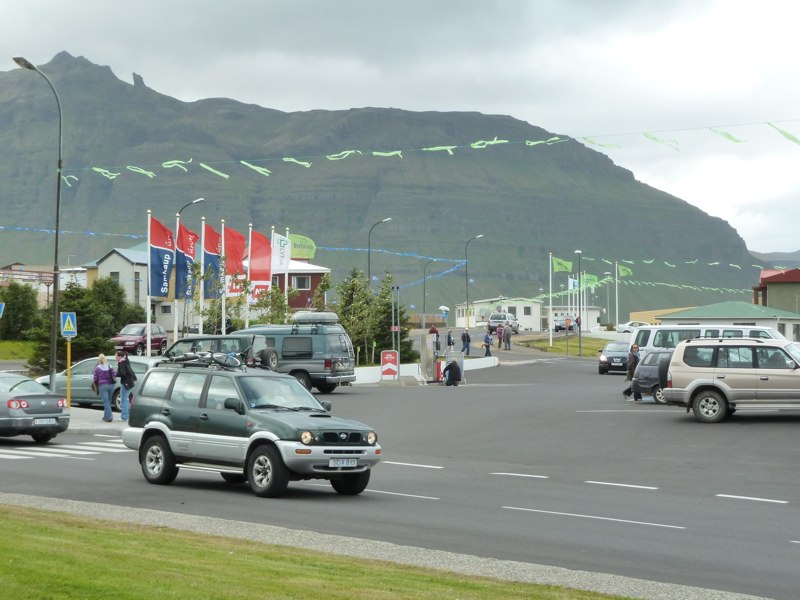 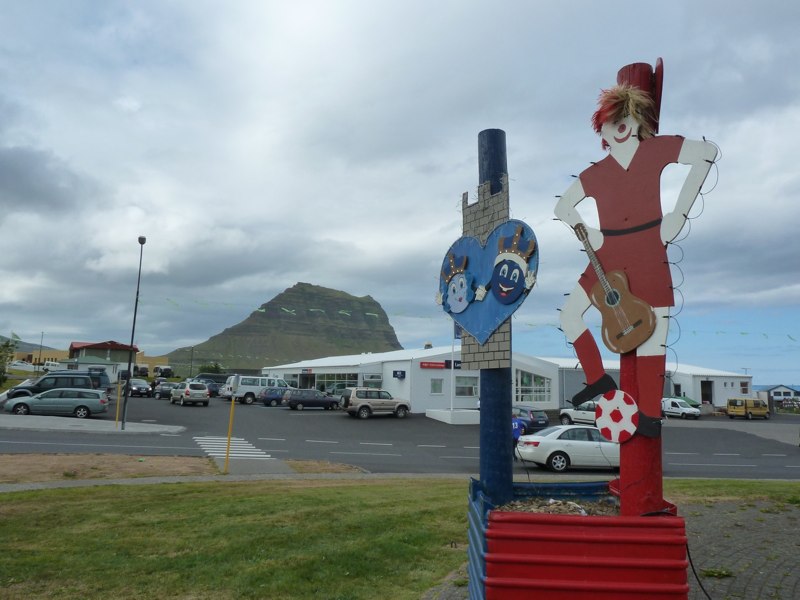 The intersection of the blue and red sections

We stopped in the local market and purchased some beverages, and got some Icelandic coins for Kevin.  It was a very nice day in Iceland. We didn’t purchase any souvenirs but we have two more stops in Iceland, so hopefully we’ll find some cute sweatshirts or tee-shirts or something.

Tonight we’ll likely share the day’s adventures with our dinner-mates and then have a quiet night.  Tomorrow is another day in another Iceland city, and we’re looking forward to it.