We slept in this morning for a bit and got up and did our usual routine of getting breakfast at the buffet. 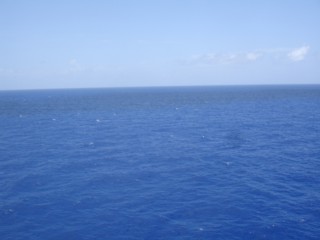 This was our view all day. Beautiful calm blue water.

We really didn’t have anything planned for the day so we shopped a little bit around the ship and Adam bought yet another watch (A cheap watch to wear while in New York) and Susan bought some jewelry at the fantastically discounted prices the ship was offering. Then we went to the casino to enter the “low ball” slot tournament! That’s right the lowest score wins! Murray and Laura were already at the top of the biggest losers list but we were determined to prove we were even bigger losers. Turns out we weren’t. We didn’t even get on the board. Later in the day Murray and Laura
would compete in a playoff round but they didn’t wind up winning. 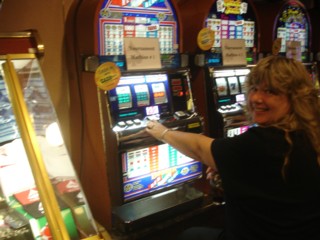 Susan and Laura both try their luck at being the biggest loser. They lost.

Next Adam went to watch the Nascar race up on the pool deck (Which at the time of this writing he still has no idea who won – because he had to leave early for dinner) while Susan decided to go to the art auction. And wouldn’t you know it she won a painting! 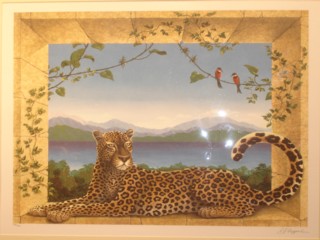 Isn’t it beautiful? We hope to get the cruise company to help frame it for us during the big framing sale on the last day of the cruise. Then Susan went to an arts and craft show where she made this nice “cheetah plate” (Adam thinks it looks like pizza). 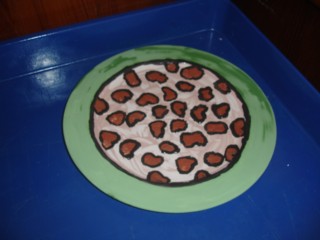 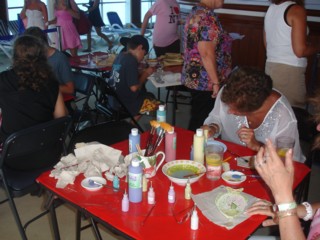 Susan’s “Art” of a cheetah plate.. or a pizza.. or a plate of refried beans. Who knows! It’s ART! On the right is a photo of the highly sophisticated crafting department.

Then it was time to get ready for our final formal night. We had a great dinner (lobster!) and they brought out a birthday cake as a belated happy birthday to Ma and Pat! 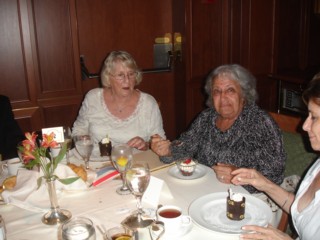 Happy birthday to them!

Then it was time to get our formal picture taken. We got it taken on the main staircase in the Piazza area. It took a while to get us all in position but we think the final photo will be really good. 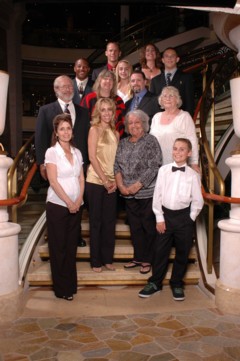 After that we went to the lounge where we watched the “Marriage Game Show” which like most all other cruises the longest married couple won – but it was entertaining still. 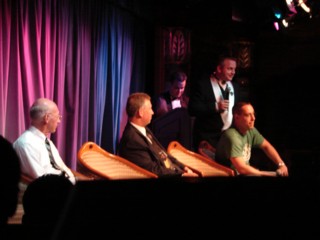 The contestants! The man on the left and his wife won. Married 51 years!

Then 2 comedians came on Uber Rossi and Lorenzo Clark. Neither one was very good in our opinion but to be fair the were both sort of rushed because it was approaching time for the Champagne water fall! Like everything else on this ship though if you weren’t there reserving your “spot” for at least 45 minutes before you have no chance at seeing anything. 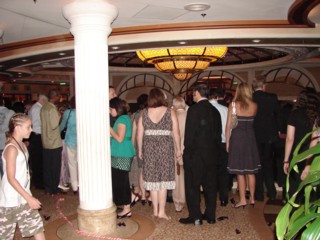 My wonderful view of the champagne water fall. Just packed with people on every deck looking down at it. I’d have to get pushy to get close enough to get a photo. 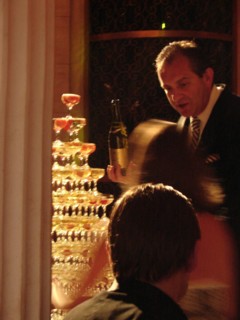 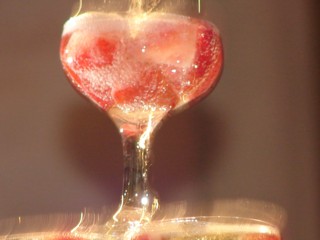 This is the best I was able to do. At least I got to see a little bit of it but for the record these champagne waterfall events aren’t very exciting.

Tomorrow we go to our final port – Bermuda. We plan to do our excursion of power snorkeling and probably a little shopping. Hopefully it won’t be quite as hot as the other 2 ports. We are looking forward to it!