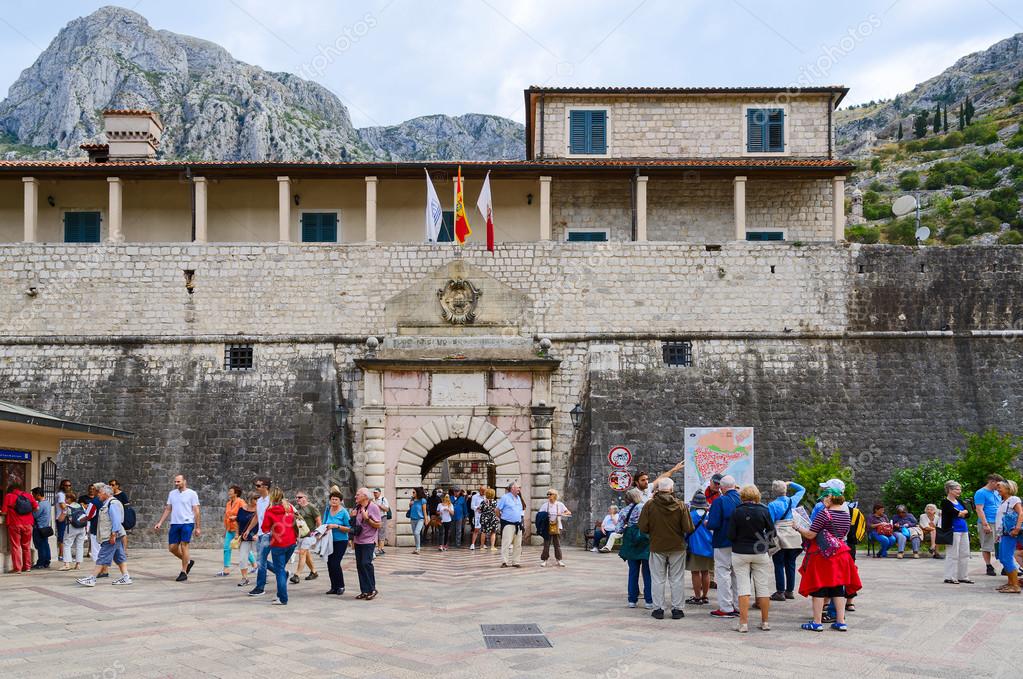 Day 7 – July 30th – Kotor, Montenegro.  Our tour today was a walking tour of the “Old City,” and then a bus ride to nearby Perast– to take a boat to the “Lady of the Rock” church on a little man-made island in the middle of the channel. 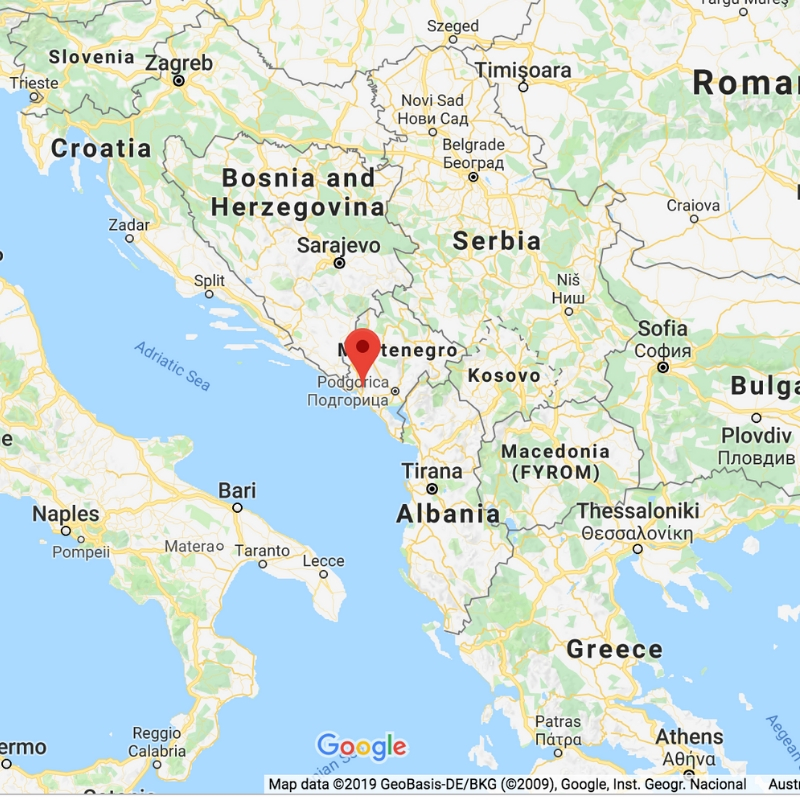 Kotor was a ‘tender’ port, meaning we didn’t dock directly at port, but in the bay nearby, and then took the ship’s tenders (also double as life-boats in an emergency) to shore.  This is a pretty common way for passengers to get to shore in some port-towns. 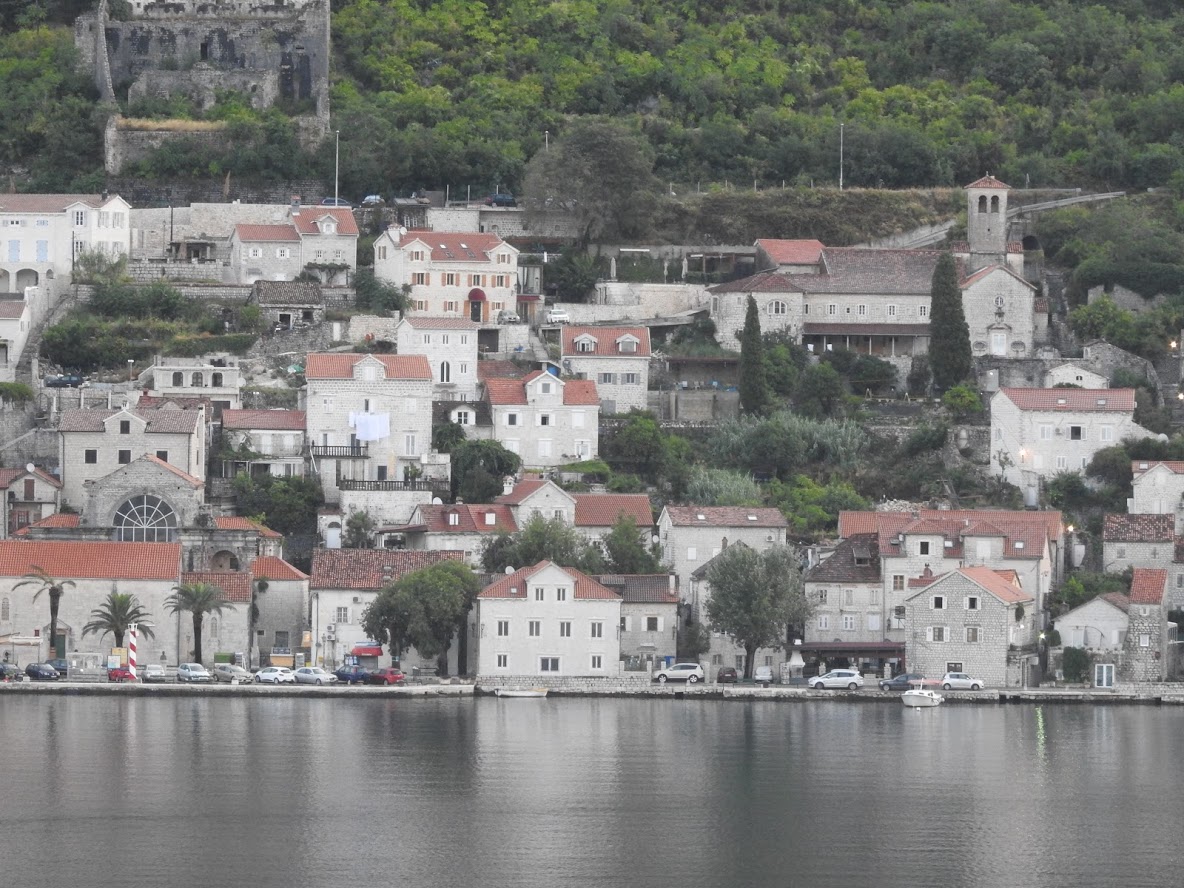 As we neared the spot we would anchor, we started seeing buildings built on the hillsides leading up to the walled city 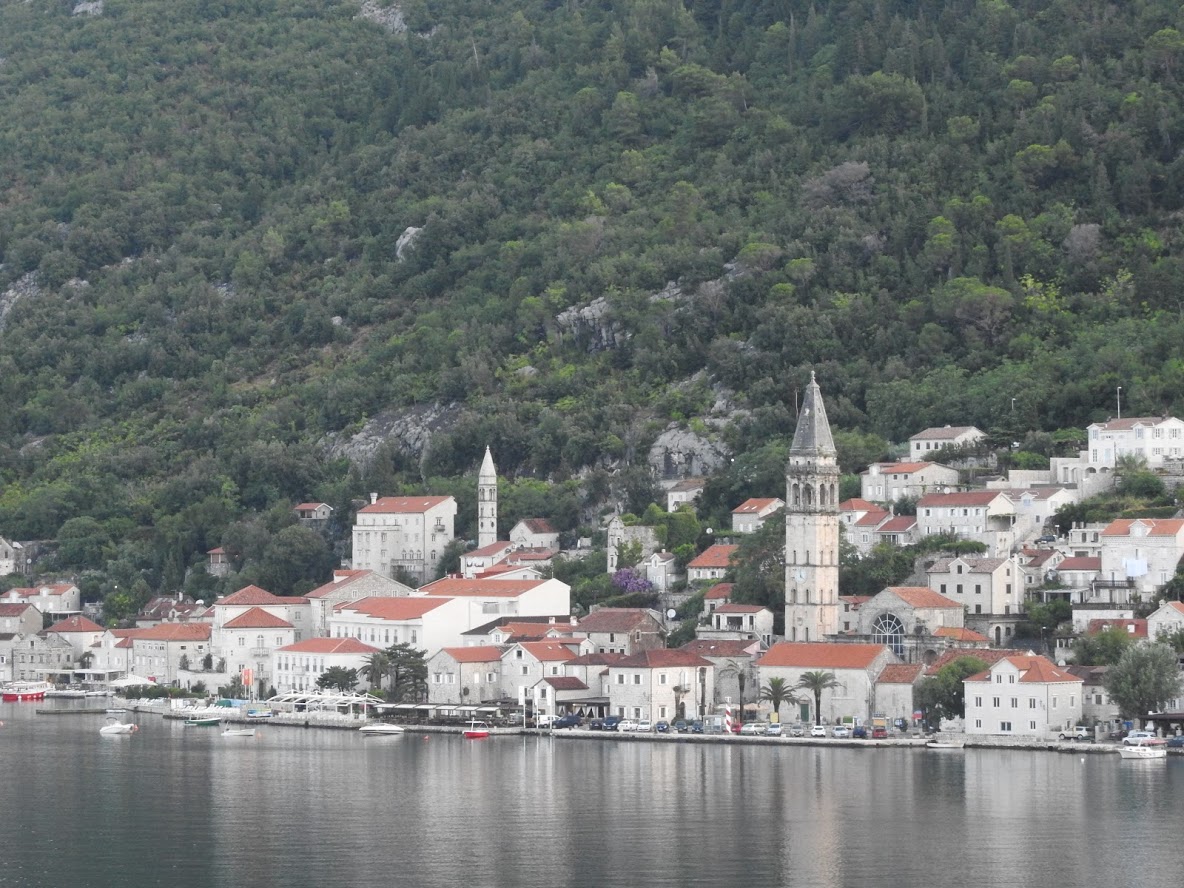 More of the pretty buildings lining the entry to the city.

Very picturesque villages along the way.

In addition to the ship’s tenders, a small army of the city’s tenders also rushed to meet us when we anchored. They were happy to welcome us!

Wikipedia has this to say about Kotor:

Kotor (Montenegrin Cyrillic: Котор, pronounced [kɔ̌tɔr]; Italian: Cattaro) is a coastal town in Montenegro. It is located in a secluded part of the Gulf of Kotor. The city has a population of 13,510 and is the administrative center of Kotor Municipality.

The old Mediterranean port of Kotor is surrounded by fortifications built during the Venetian period. It is located on the Bay of Kotor (Boka Kotorska), one of the most indented parts of the Adriatic Sea. Some have called it the southern-most fjord in Europe, but it is a ria, a submerged river canyon. Together with the nearly overhanging limestone cliffs of Orjen and Lovćen, Kotor and its surrounding area form an impressive landscape.

Our tour-guide gave us a brief history as well – one that explained the many times the city had been invaded and all of the inhabitants had been killed.  Not very cheerful!  But we found it to be a quaint and interesting town.

Adam on the tender, on our way to shore.

After leaving the tender, it was a short walk to the city gate.

Our first (of many!) sighting of one of Kotor’s cats!

The ‘main square’ – right after entering through the gate. Here our guide explained to us how people would be publicly shamed if they committed a crime.(They would be chained to that pyramid looking thing, and the villagers would throw produce at them!)

Another angle of the ‘main square’ just in side the city gate.

We saw ‘giant’ things all over town, we were told it was part of a festival – here you can see a lamp. In other places we saw giant clothing, a giant park bench, and a big bird.

The gal with the red lanyard is our tour-guide. She was fun to listen to, and very informative!

An example of some of the architecture in the city.

Another of Kotor’s cats!

There are many churches inside the city walls – our guide indicated that they mostly peacefully co-exist.

A small monument dedicated to the cats of the city. 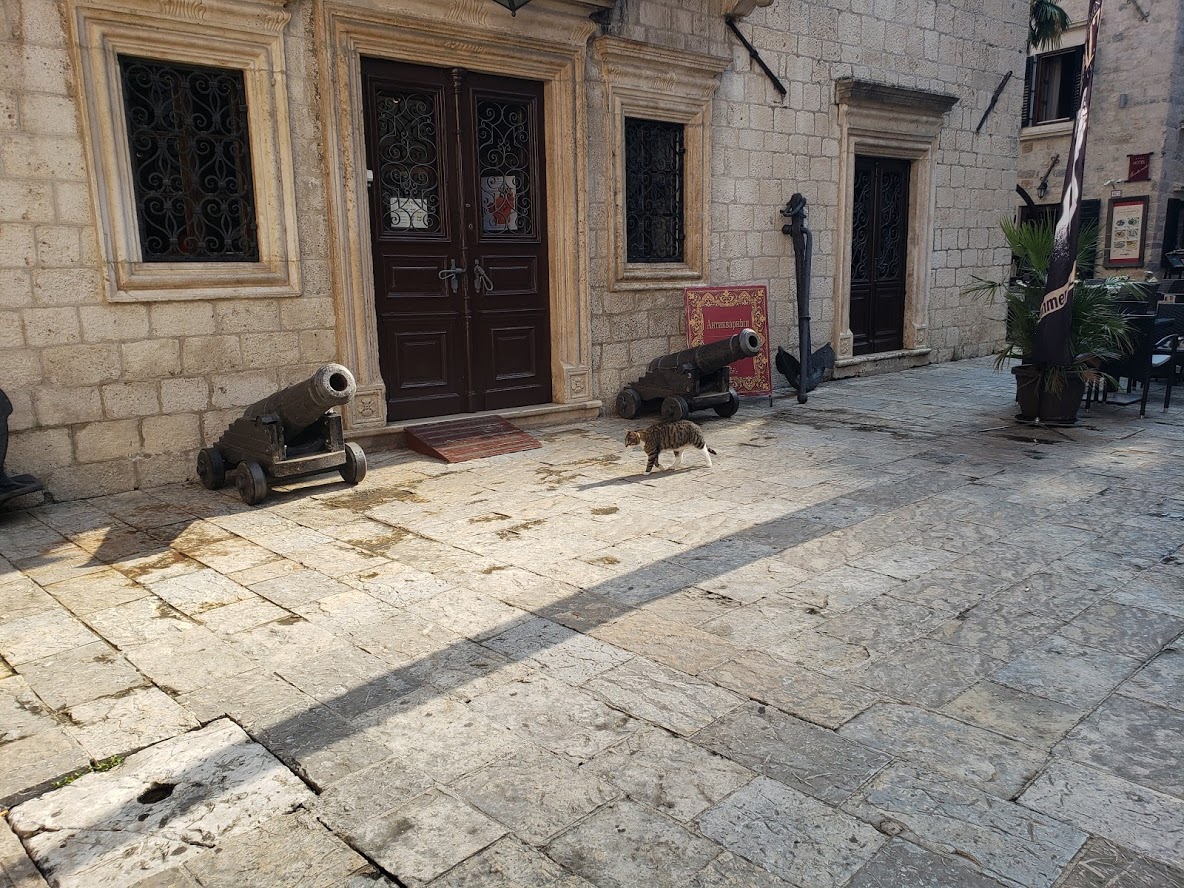 Another cat led us to the maritime museum. 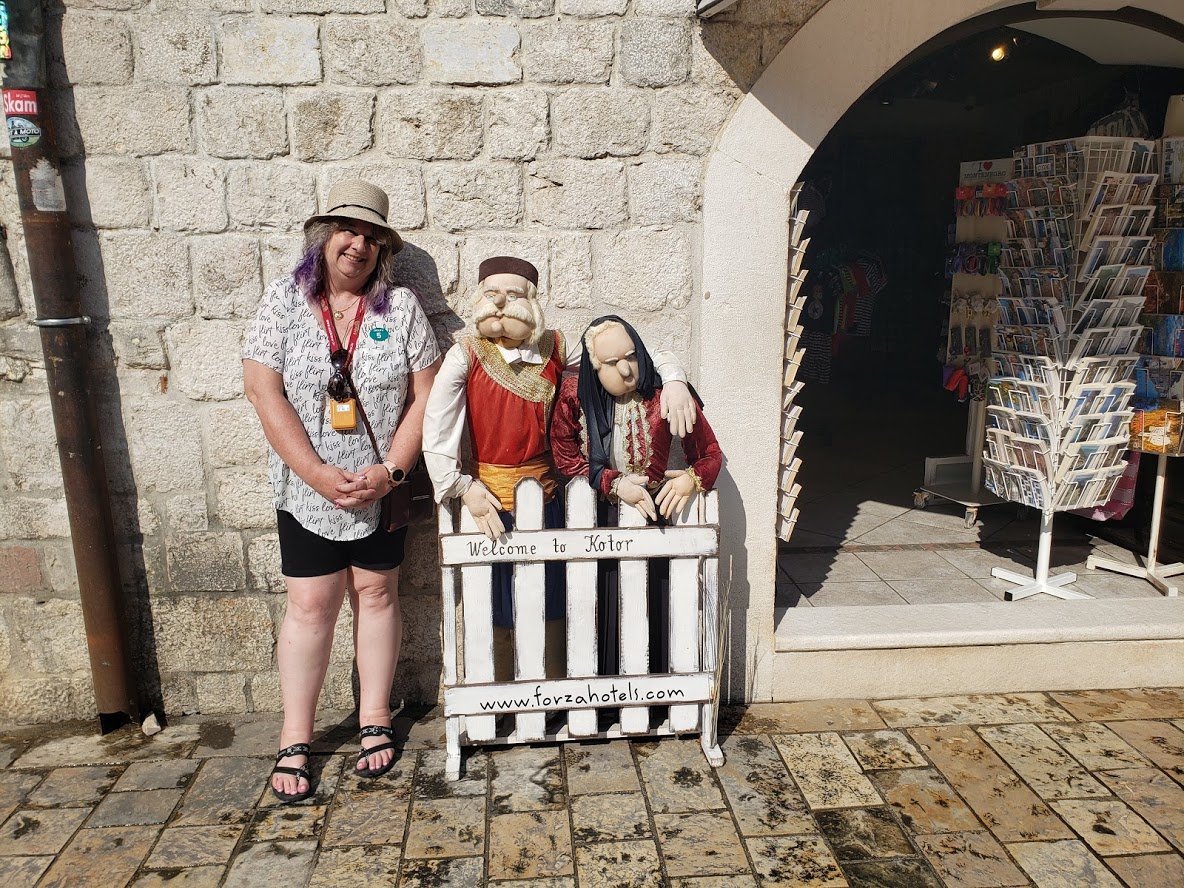 We saw many cats and we learned that they love their cats there, and even have a cat museum.  (here’s an interesting article about their attachment to cats:  https://theculturetrip.com/europe/montenegro/articles/bizarre-history-kotors-fascination-cats/ ) We learned a bit about the history of the town and enjoyed our time there. 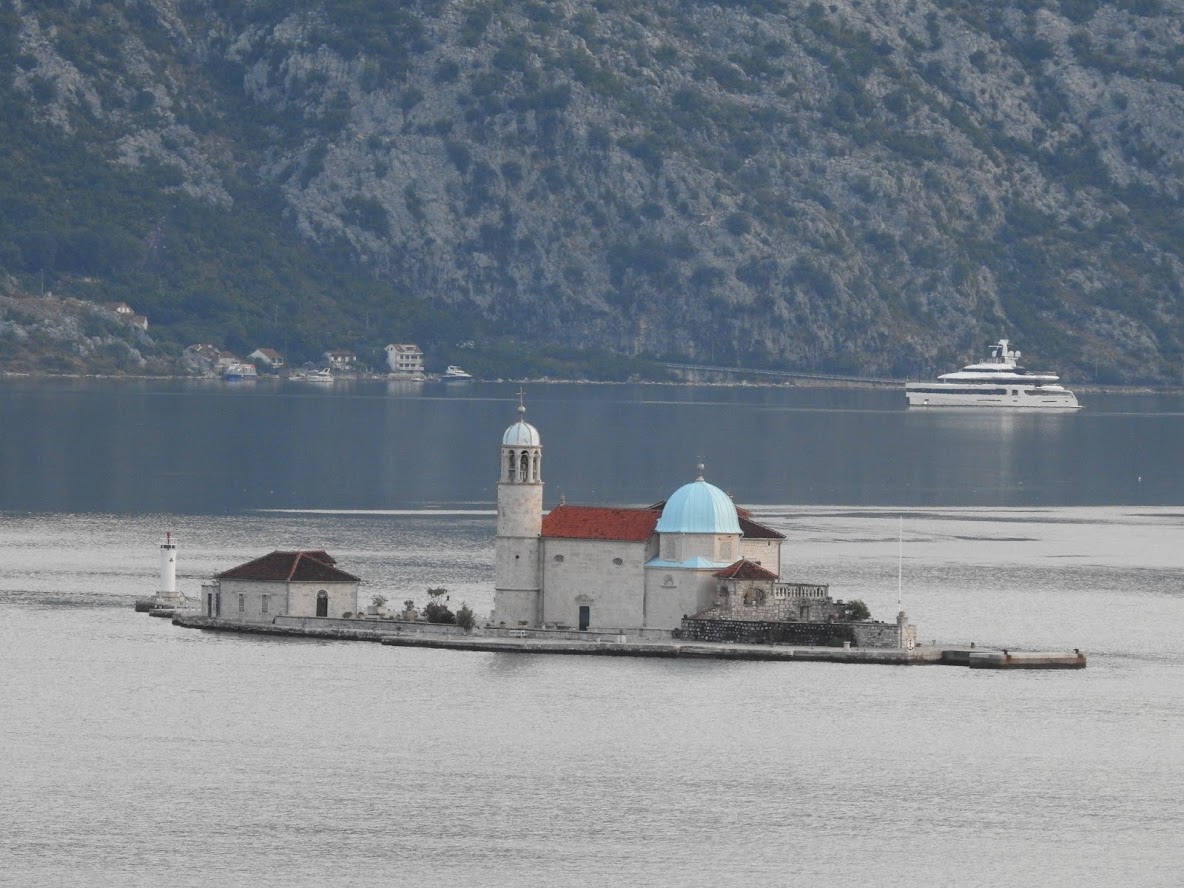 Our first peek at the islet was as our ship entered the channel on the way to Kotor.

According to legend, the islet was made over the centuries by local seamen who kept an ancient oath after finding the icon of Madonna and Child on the rock in the sea on July 22, 1452. Upon returning from each successful voyage, they laid a rock in the Bay. Over time, the islet gradually emerged from the sea.The custom of throwing rocks into the sea is alive even nowadays. Every year on the sunset of July 22, an event called fašinada in the local dialect, when local residents take their boats and throw rocks into the sea, widening the surface of the island, takes place.

The Roman Catholic Church of Our Lady of the Rocks (Italian: Chiesa della Madonna dello Scarpello) is the largest building on the islet; it has a museum attached. There is also a small gift shop close to the church and a navigation light at the western end of the islet.

Some of the ‘gifts’ the locals placed in the church – this was a tradition, to gain a blessing to bring home their family members from being at sea, safely. 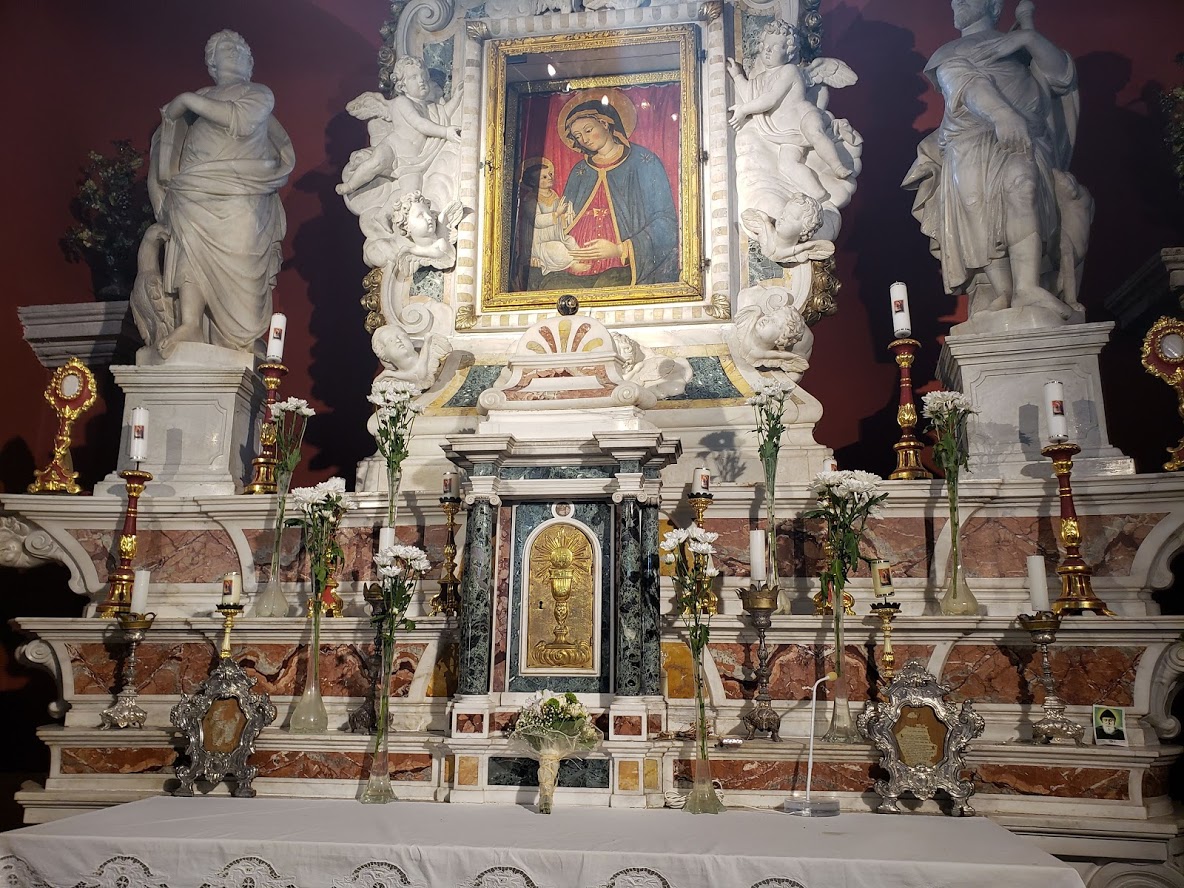 The alter in the church

After our visit to the church, we took a boat back to Perast, and had a lovely lunch at a harbor-side cafe, and explored Perast a little bit.  There were a lot more cats there too! 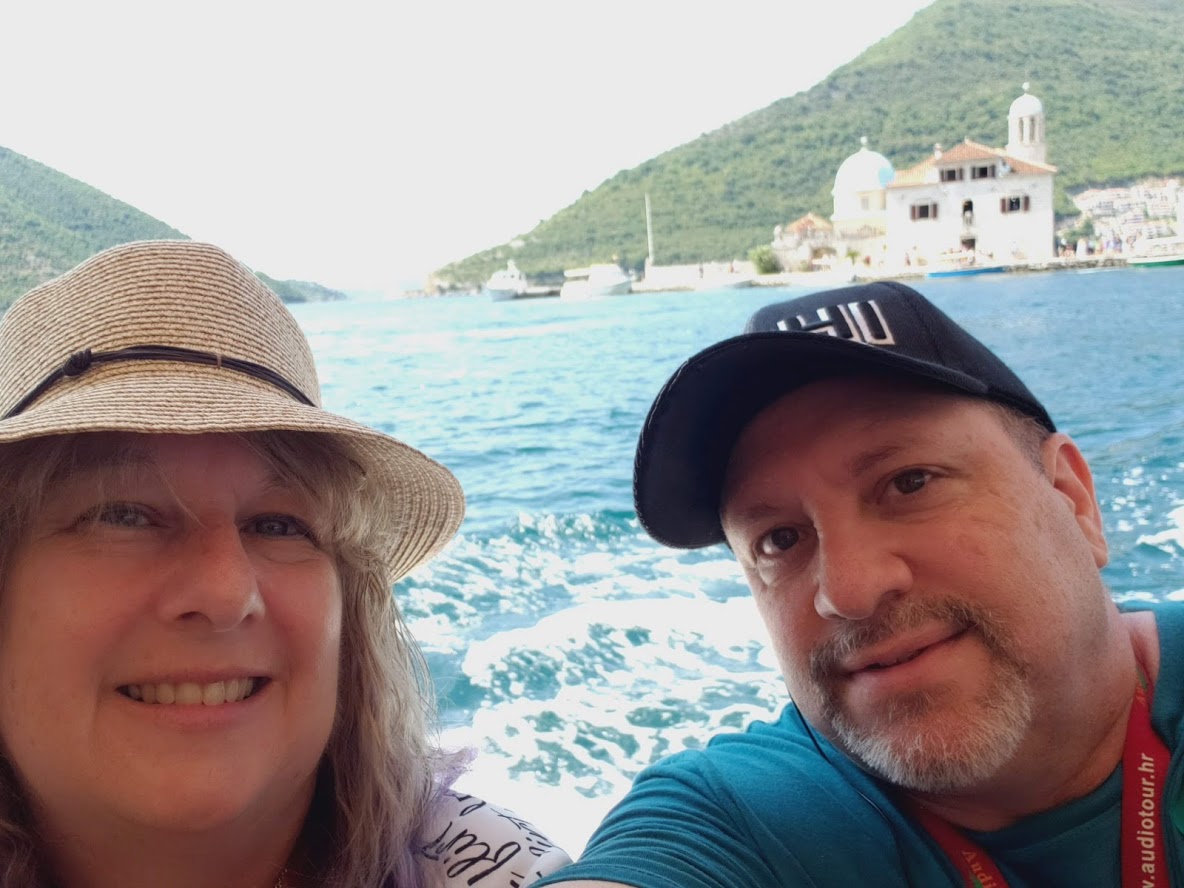 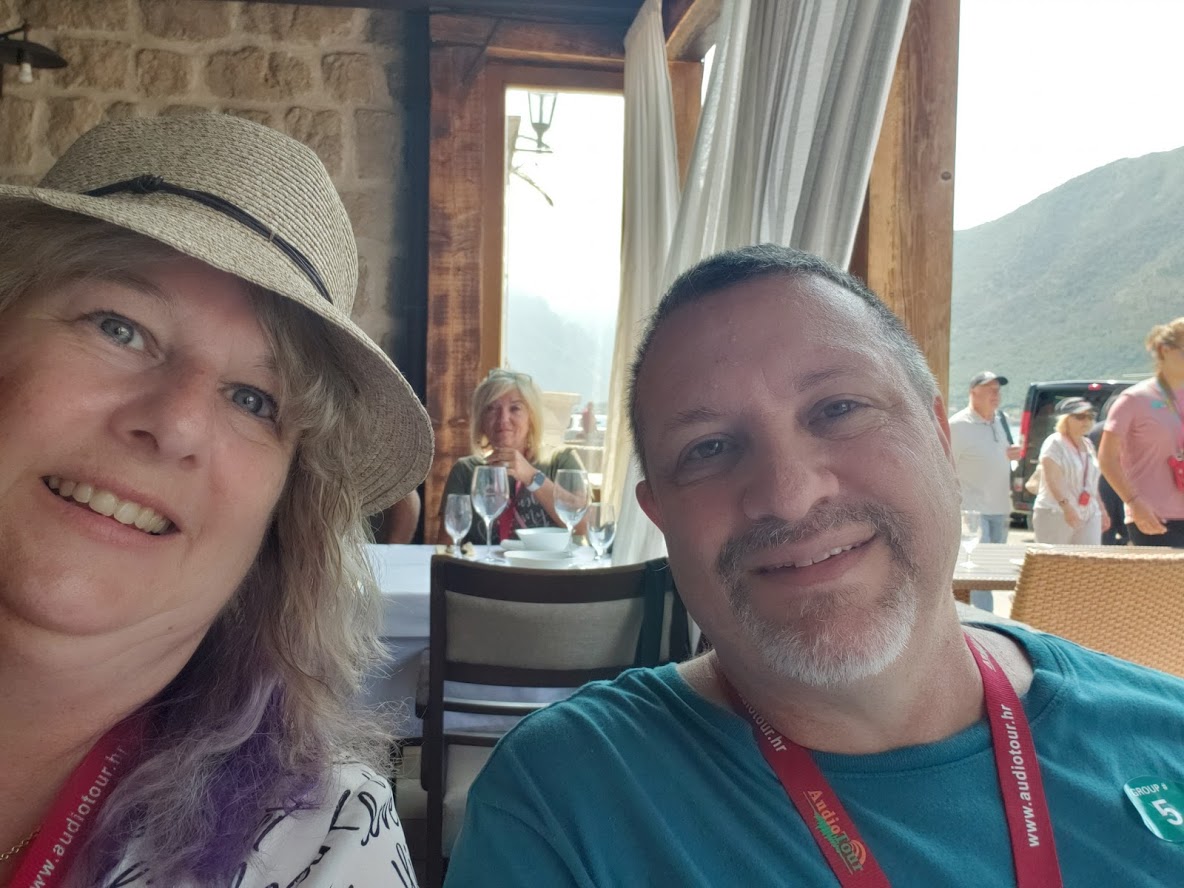 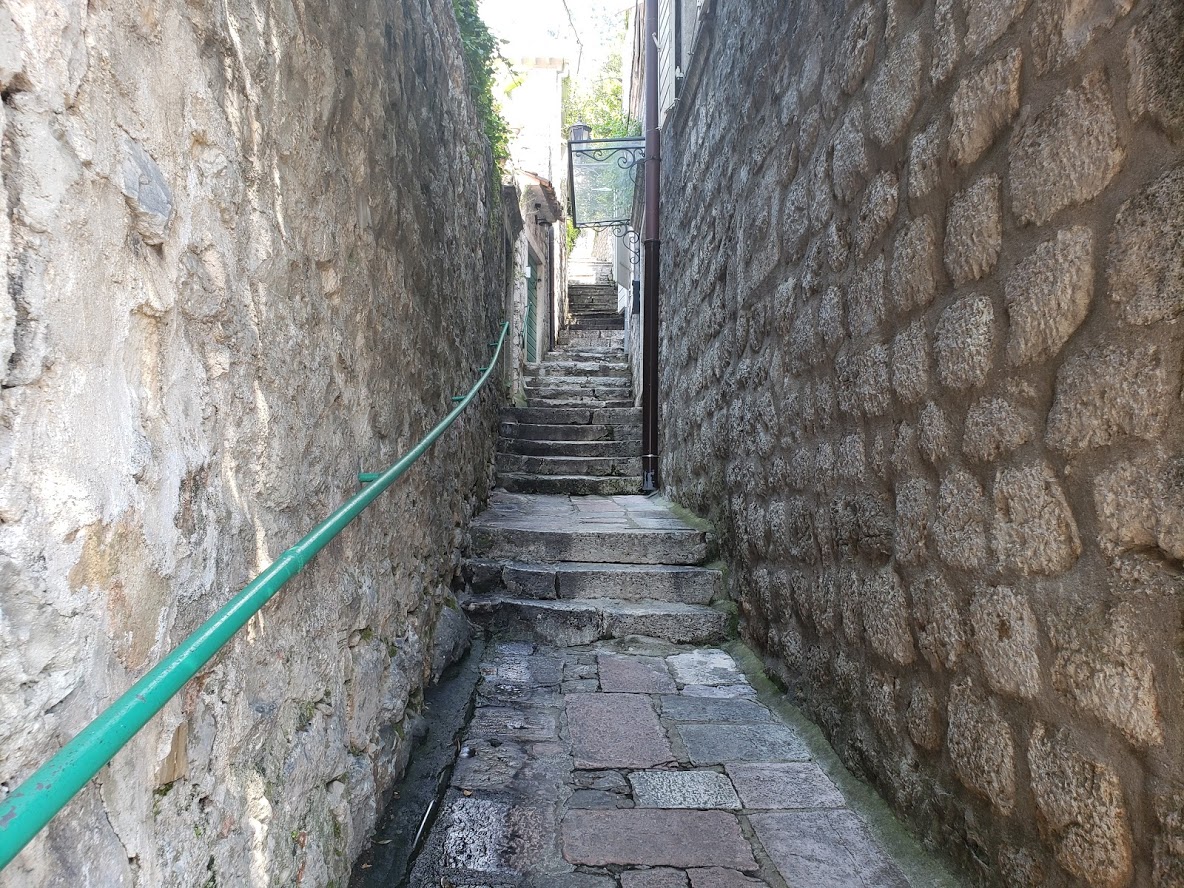 We will actually return to this town again on this cruise, and look forward to exploring the town a bit more. 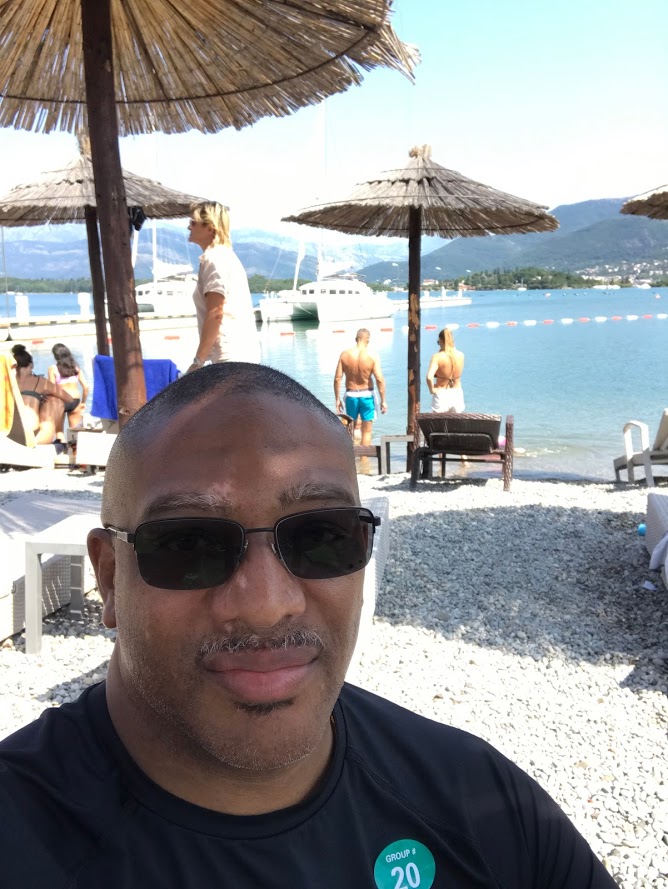 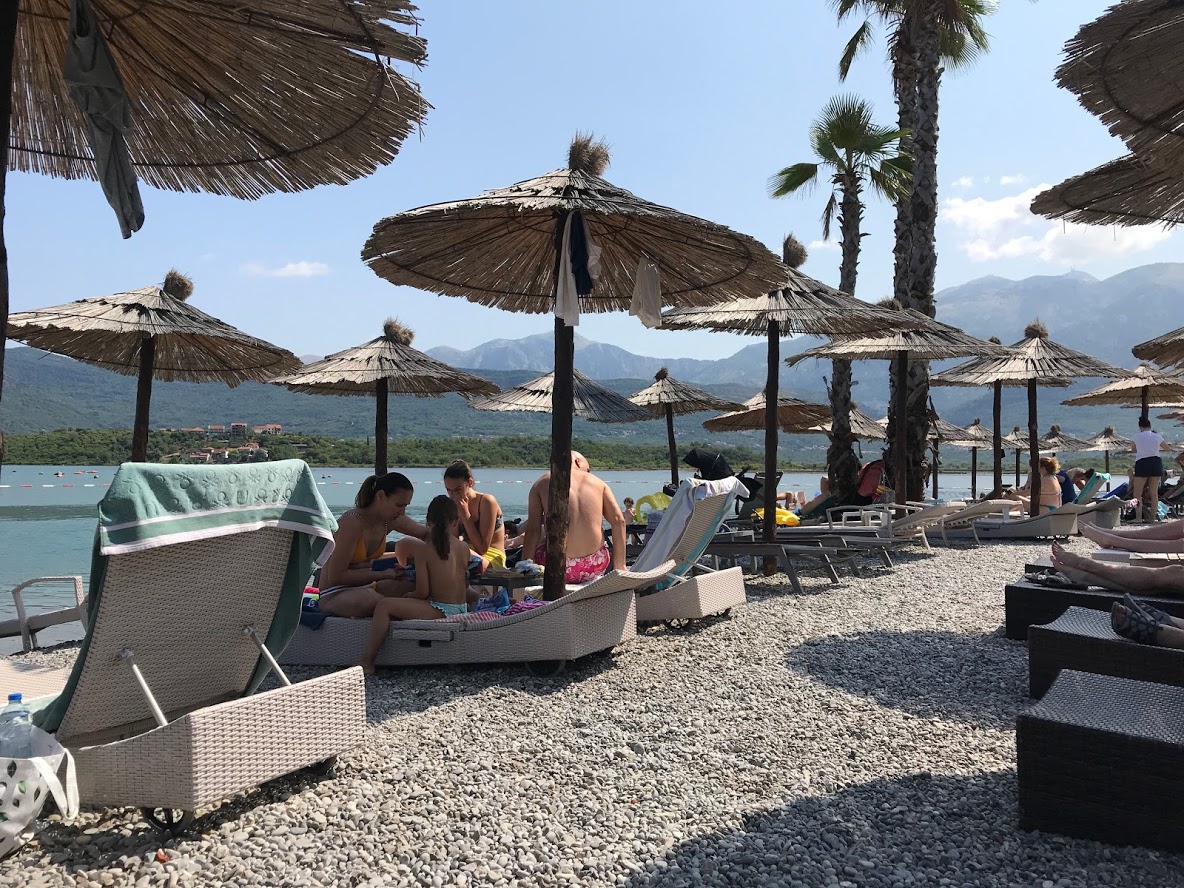 Murray’s boat ride even took him past “Our Lady of the Lake” – wonder if we where there at the same time?? 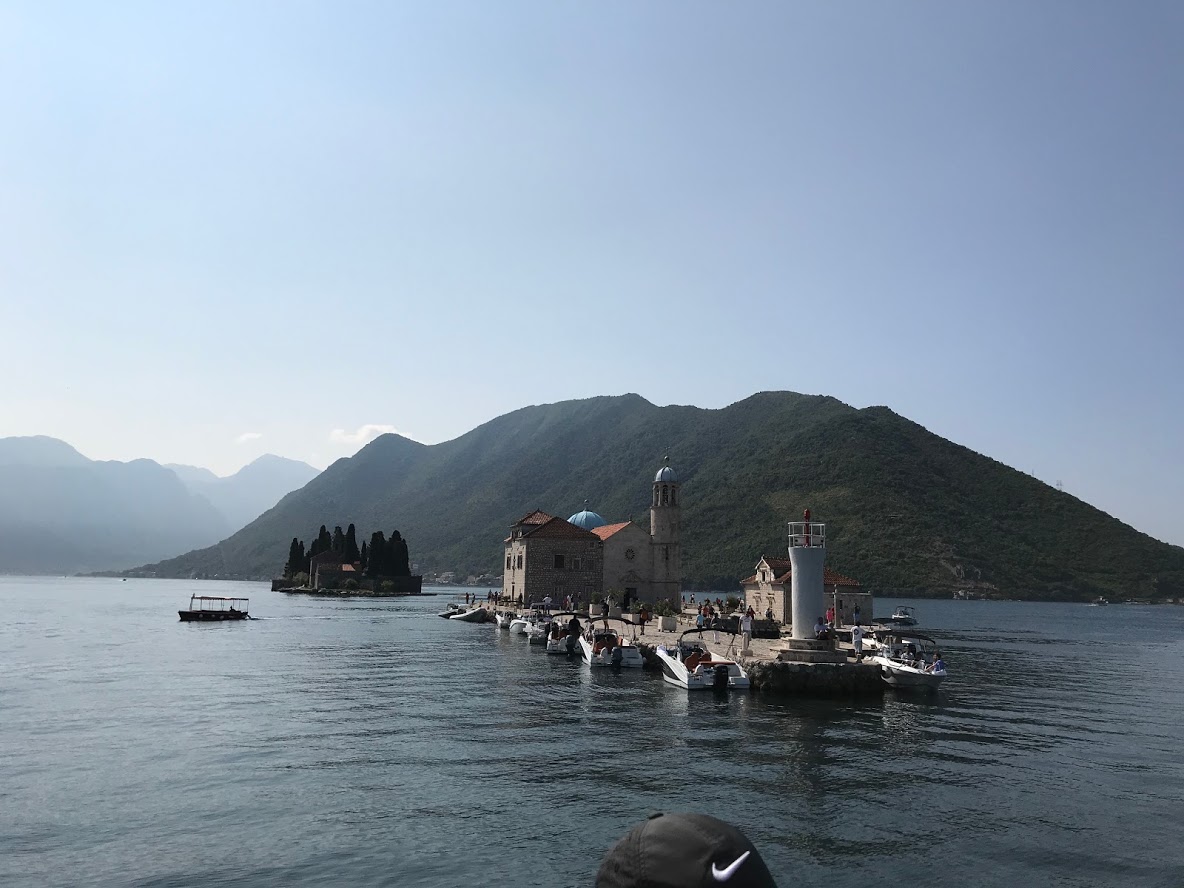 Bonnie and Steve climbed the city wall (over a thousand steep steps to the top of the mountain!) and later met up with Cheryl and had a wonderful experience visiting with a local archaeologist who showed them some artifacts he and his team were restoring. 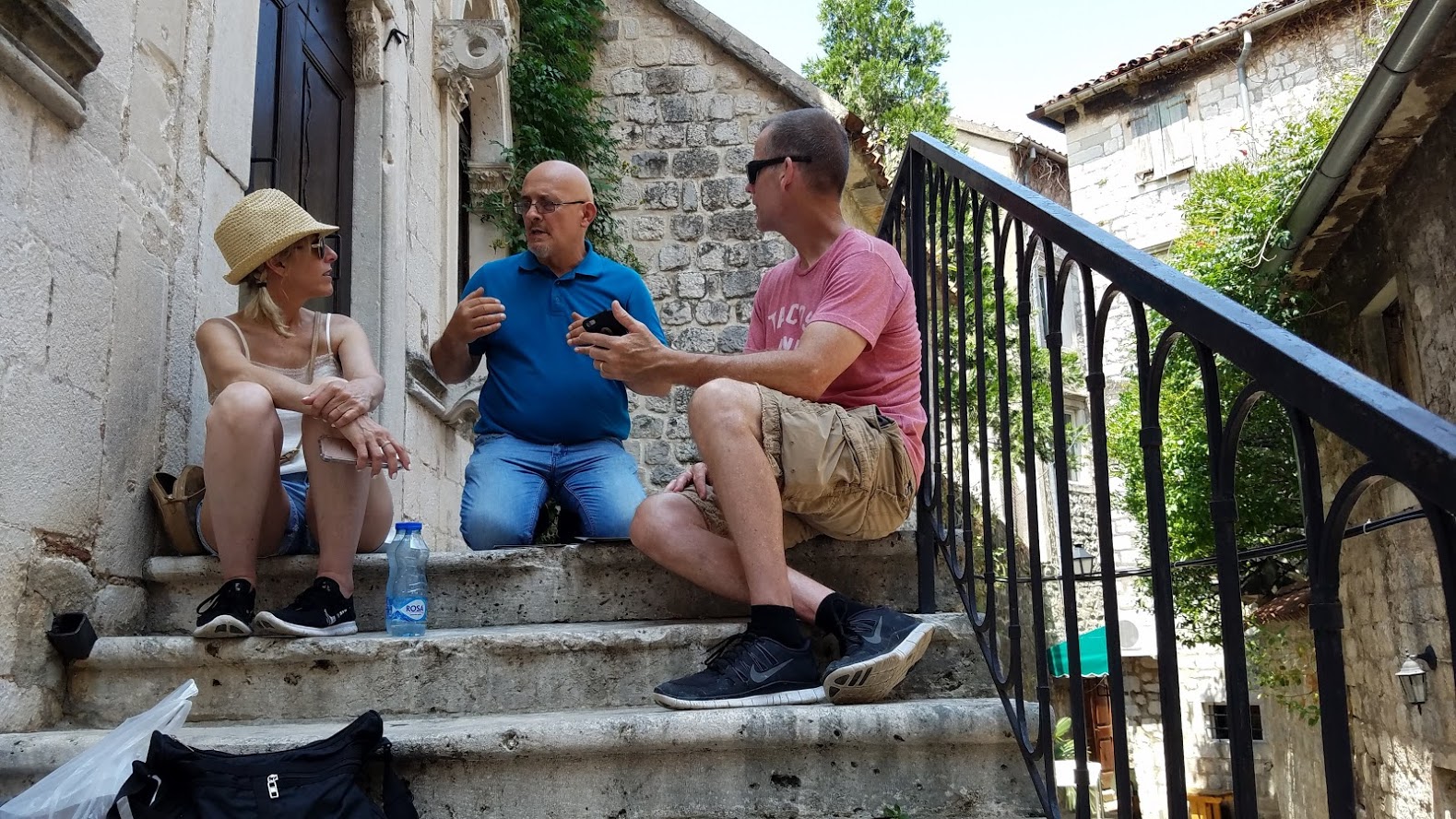 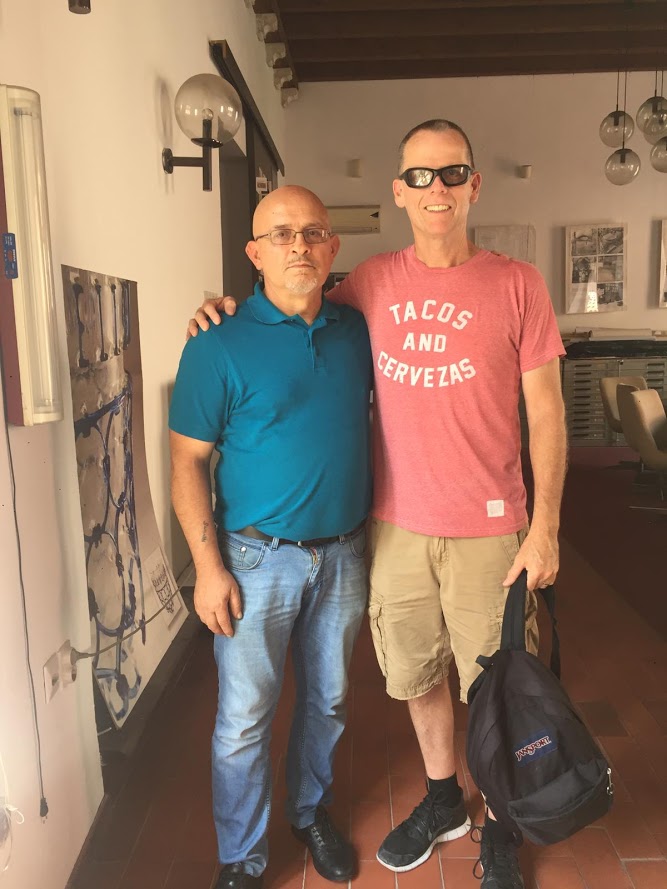 We enjoyed our time in Montenegro, and looked forward to returning to explore a little more! 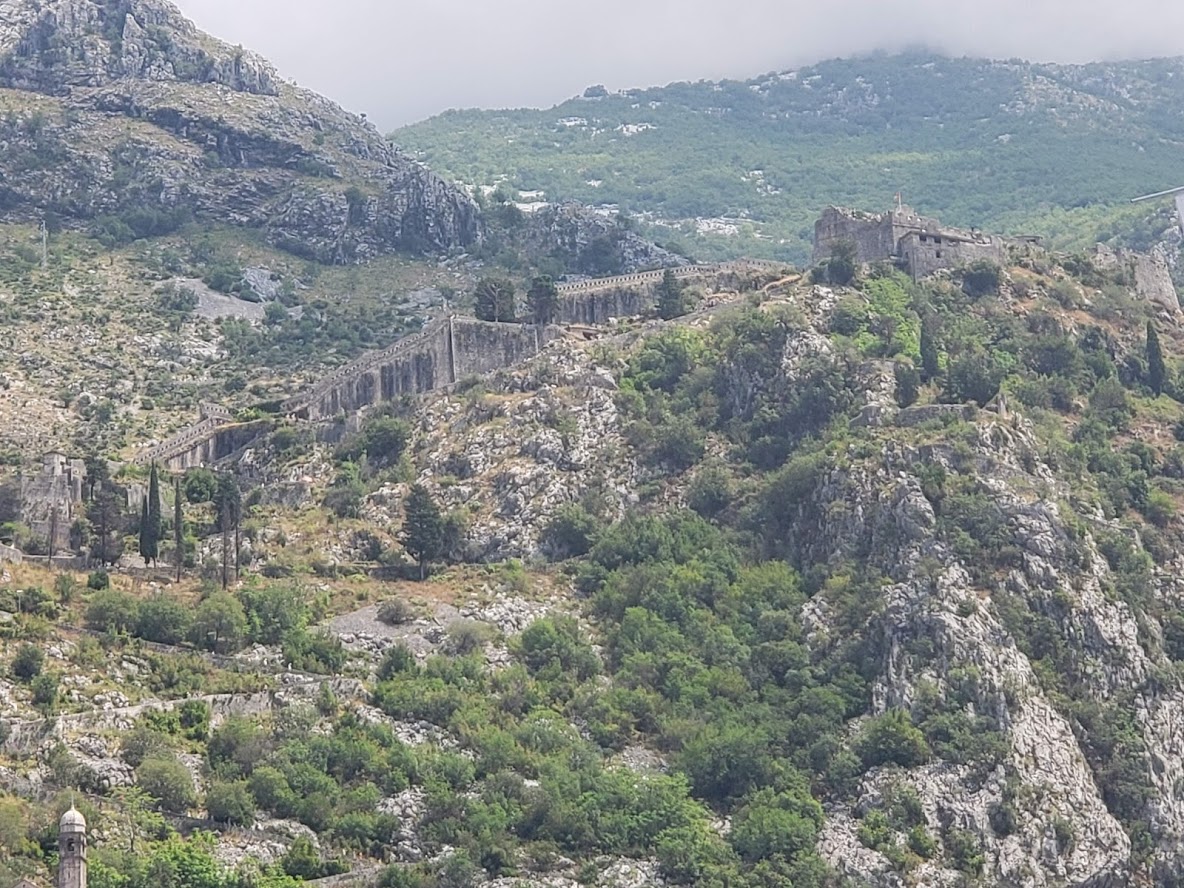