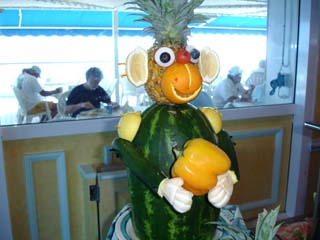 Up in the morning for our breakfast buffet, and we snapped a photo of one of the “fruit animals” they had on display. It was a hot day and we were heading towards Raiatea and Tahaa. 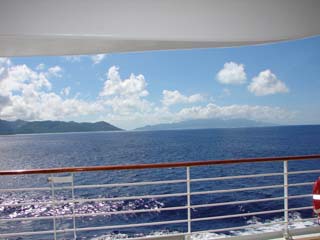 We had a late docking into Raiatea so we snapped some photos as we slowly started to head towards the port. Yes, we actually docked there! No ship tender! 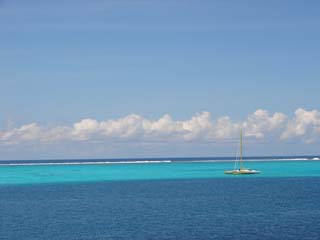 What a beautiful view. The way the water changed color was just amazing. Looking down the water was crystal clear. 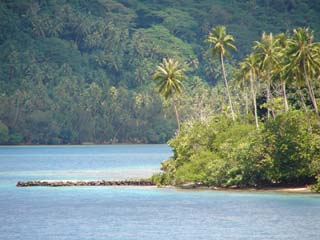 This was probably the prettiest island we’d seen so far. 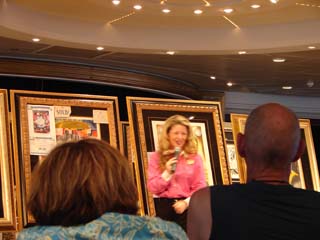 Hey, what’s this? Another quickie art auction! Turns out the final one wasn’t final after all and the art auctioneer we able to get another hour. Once again we made it through without buying anything. We were told that tomorrow there’s a time to get your painting framed if you bought any, we’ll come by tomorrow and see if they have any frames for the 2 little ones Susan bought earlier in the trip. Then she should be all set. 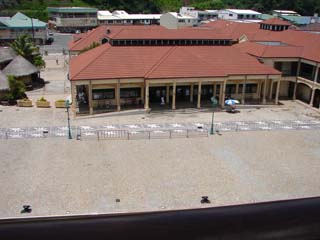 This was the few from our cabin as we docked. On the outside of the building merchants are setting up. Susan was wondering what the merchants had for sale. So… 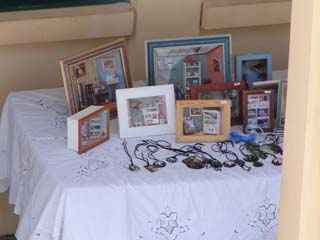 This photo was take from our balcony (same as the previous photo) but thanks to super-duper zoom we could see what they had for sale before we were disembarking. It was more of the same stuff we’d seen for sale on other islands.

Even though we were docked our tour we have set up takes us to the neighboring island of Tahaa by boat (pictured) where we are then taken by Bus on a brief tour of the island, to a vanilla plantation, a pearl farm, and then back on the boat to get back to the dock. It was an extremely hot day but we were looking forward to seeing these beautiful islands. 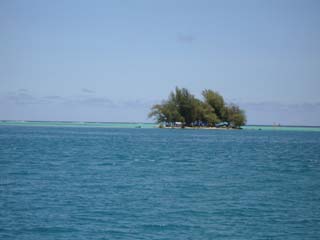 The boat ride over to Tahaa was hot but amazing. Little islands dotted the trip there.

Still on the boat. 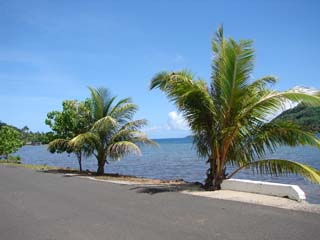 Finally we are on the Island of Tahaa where we get on a small bus and get driven to the Vanilla farm. 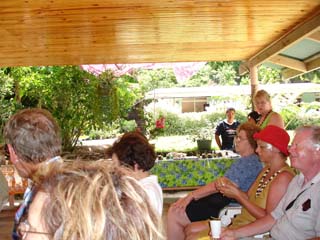 Getting ready for our explanation as to how vanilla is made. We’d already seen this on a previous tour but this was to go into more detail. It is sweltering hot. Fortunately they have some drink for us, but that only helps for a few minutes.

That’s our tour guide and a worker at the vanilla plant explaining the whole process to us. To make vanilla extract put 5 or 6 vanilla beans in a bottle of the cheapest rum you can find for 3 months. Then, take the beans out and put in another bottle of rum. This can be done 3-4 times with the same beans and you can make 3-4 liters of vanilla extract this way. Also we are told how to make Vanilla ice-cream, and all sorts of other vanilla-ish things. We bought some of the vanilla here to give it a try. 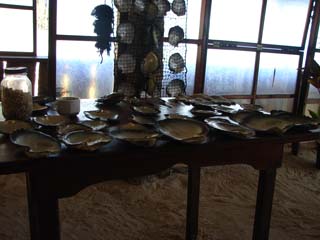 Off to the black pearl farm! Once again we didn’t buy any pearls, but it was a nice little area to relax in. Shade! Ahhh… 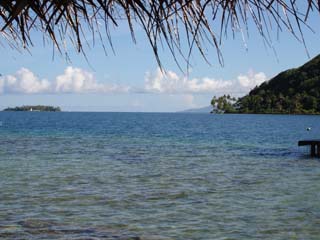 This is a view form the pearl farm. We got on the tour boat and we back to shore. It was so so hot we couldn’t wait to get in and get showered and cooled down. 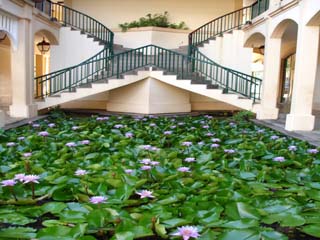 In the building near where the ship is docked, a beautiful staircase. After we cool off we plan to head back down and shop around here. 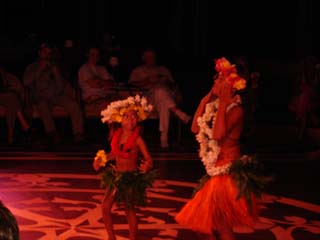 Back on board the ship we showered, grabbed a quick bite to eat, and then went to see a dance show put on by the locals. One of the stars of the show as only 3 years old. It was a fun show, but mostly we are glad to just be inside for a while where it’s cool.

As it turns out, after the show all the shops we were going to go look around at are closed! Oh well. Instead we relaxed on our balcony and then went to see a magic show. The magician was pretty funny and he did some good slight of hand. Then it was off to dinner. 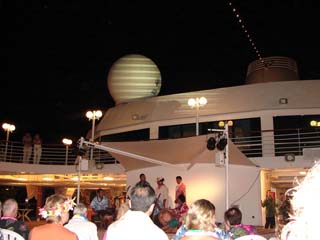 We have 2nd seating dinner so when we are done it’s usually around 10:15 or so. We went to the pool deck where the parents of the kids that did the show earlier, were putting on a show of their own for us. Lots of dancing and singing but the night was young and the party is just getting started. 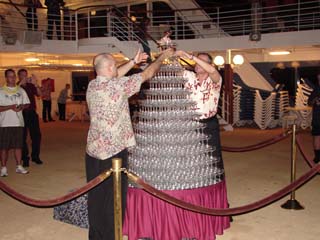 While all the music and dancing was happening on one side of the ship they were building this champagne waterfall on the other end. 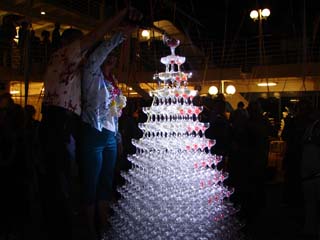 They turned down the lights and the champagne waterfall lit up. It was really a nice effect. Then they invite people to pour champagne at the top and watch it cascade down. 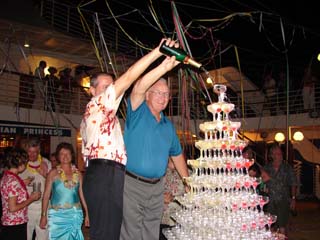 One of the folks we had the honor of spending our dinners with, Russell, takes his turn at the waterfall. Everyone had lots of fun.

Practically the whole boat was on deck for this. It was a wonderfully clear night and you could see the stars and there was no hot sun beating down on you, and free champagne! 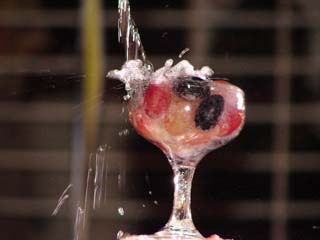 The zoom on this Sony H1 camera is truly amazing. This photo was taken standing at the same spot as the pervious picture. This is the glass at the top of the champagne waterfall. It’s filled with fruit. 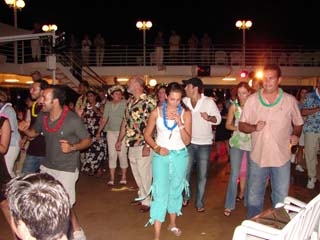 Filled with champagne everyone was dancing and singing and movin’ to the groove.. 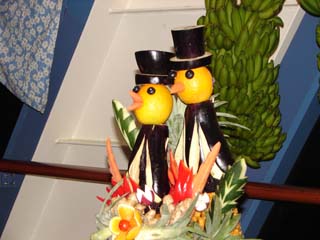 Some more fruit animals that were on display. It was a very fun night.