We got up a little bit later than usual today since it was a day at sea and went down for
breakfast. Then we decided to see a Live Painting Demonstration by the artist Allison
Lefcort. 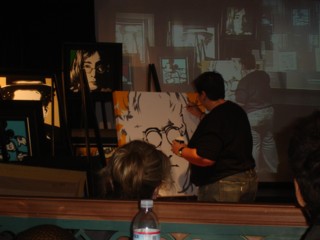 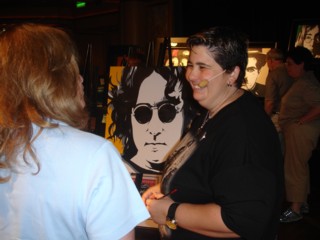 That’s Allison’s John Lennon painting before and after the presentation. She had it “pre sketched” so we could see her doing the intricate stuff like the hair and shading. She does lots of nice paintings of Disney and Warner Bros. characters (among many others) and her  painting demonstration was really interesting.

Nothing on the days itinerary looked very interesting until later so we went back to the room to relax. Later in the day we went for a quick lunch and then we met the rest of the gang for afternoon trivia. We didn’t do very well but we had a good time.

Time for dinner again! Kevin decided to be brave and try some Escargot and Frog’s legs for dinner. 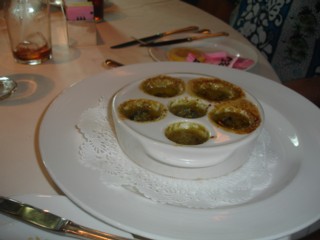 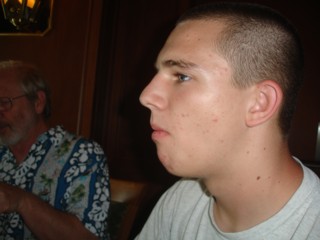 Kevin’s Escargot! Then a few seconds later Kevin was thinking “What did I just eat?”.

Jack having a second serving of ice cream and the family chatting at dinner.

After another great dinner Susan went back to the casino to try and win a bit more (she’s doing pretty well!). Adam went with Bonnie, Steve, Allison, Jack, and Kevin to see a juggler Greg Kennedy. He was a really good juggler and had a fun show. Jack even got to go on stage to help him for a while! 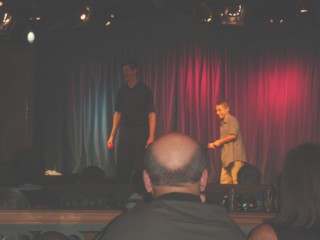 Jack is helping out Greg Kennedy as he does his juggling routine. Go Jack!

After that it was time for bed as we have to get up plenty early tomorrow for a day hitting the
beach and snorkeling tomorrow in Grand Turk!