After a nice family breakfast we all got on our tour for the Acropolis and time on your own in the Plaka. It was a very hot day. We had a guided walked tour to the Acropolis in the heart of Athens, climbed the steep steps to the Propylaea which is the marble gateway to the ruins. Then then climbed up to the high point where the Parthenon was, took a cred picture, and then walked to the Erectheum (the sacred site where it was decided Athena would rule the city). 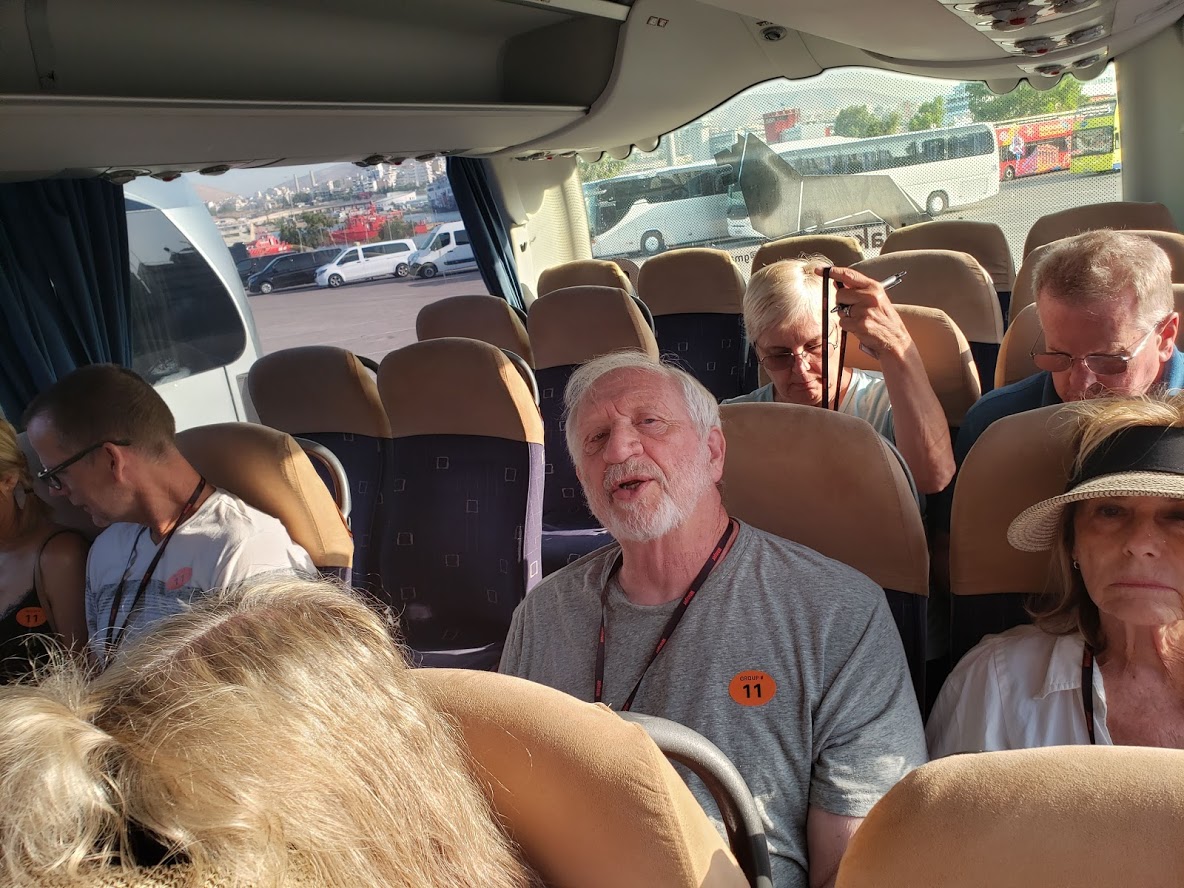 All aboard the tour bus!

Our tour-guide for the day.

Our first peek at the ruins at the top of the hill.

It was a bit crowded!

The Acropolis of Athens is an ancient citadel located on a rocky outcrop above the city of Athens and contains the remains of several ancient buildings of great architectural and historic significance, the most famous being the Parthenon. The word acropolis is from the Greek words ἄκρον (akron, “highest point, extremity”) and πόλις (polis, “city”). Although the term acropolis is generic and there are many other acropoleis in Greece, the significance of the Acropolis of Athens is such that it is commonly known as “The Acropolis” without qualification. During ancient times it was known also more properly as Cecropia, after the legendary serpent-man, Cecrops, the supposed first Athenian king.

While there is evidence that the hill was inhabited as far back as the fourth millennium BC, it was Pericles (c. 495–429 BC) in the fifth century BC who coordinated the construction of the site’s most important present remains including the Parthenon, the Propylaia, the Erechtheion and the Temple of Athena Nike. The Parthenon and the other buildings were seriously damaged during the 1687 siege by the Venetians during the Morean War when gunpowder being stored in the Parthenon was hit by a cannonball and exploded. – Wikipedia.

Great view from the top!

More of the great view.

Walls of the old theatre. 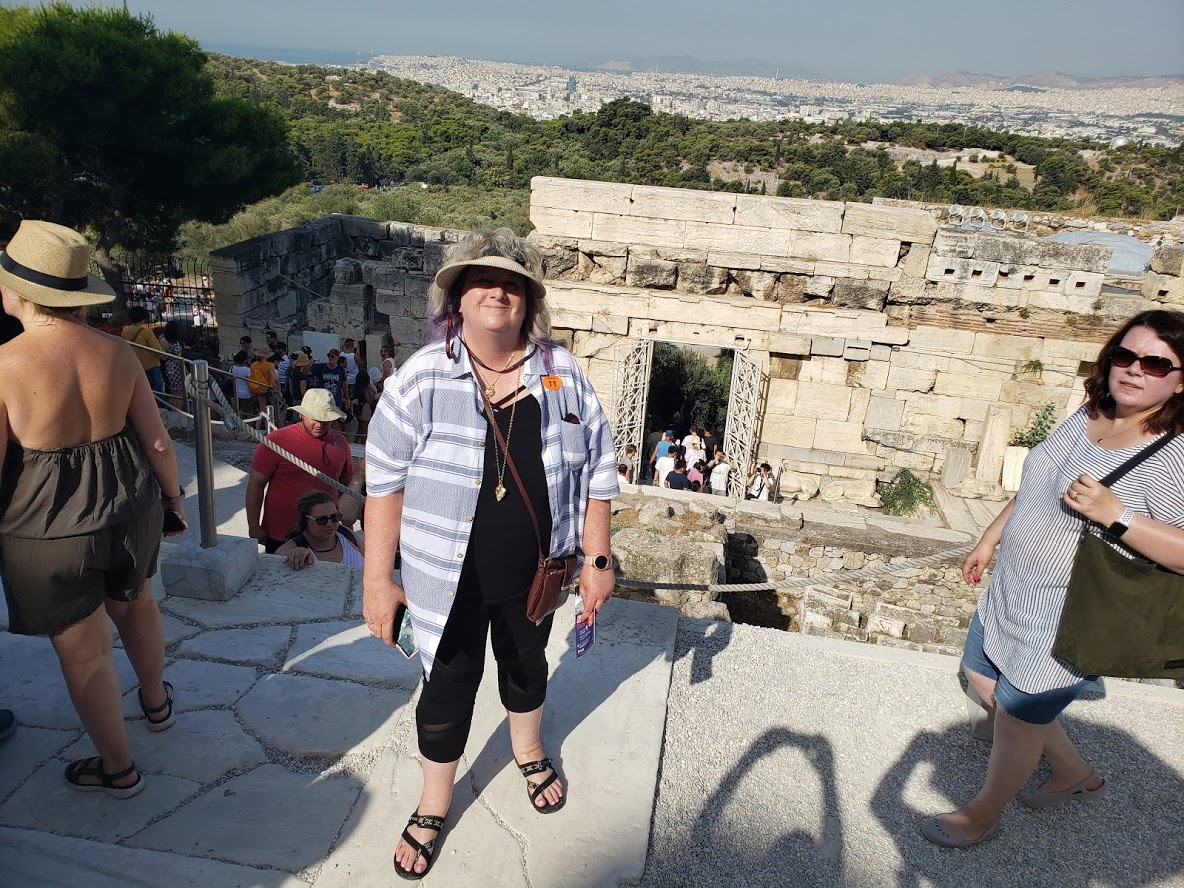 Making our way up to the top of the hill. 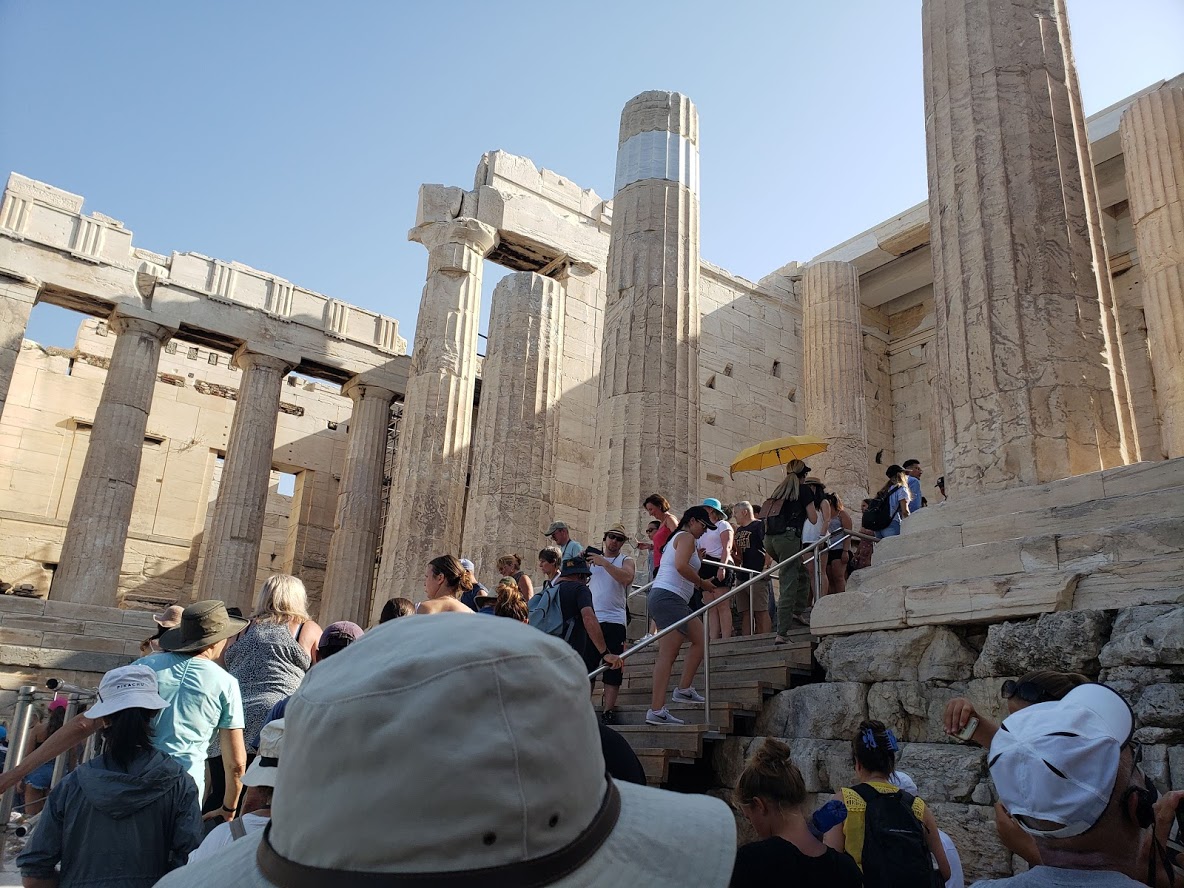 Yay! More climbing! It was really surprisingly slippery. We saw a few people slip and fall. 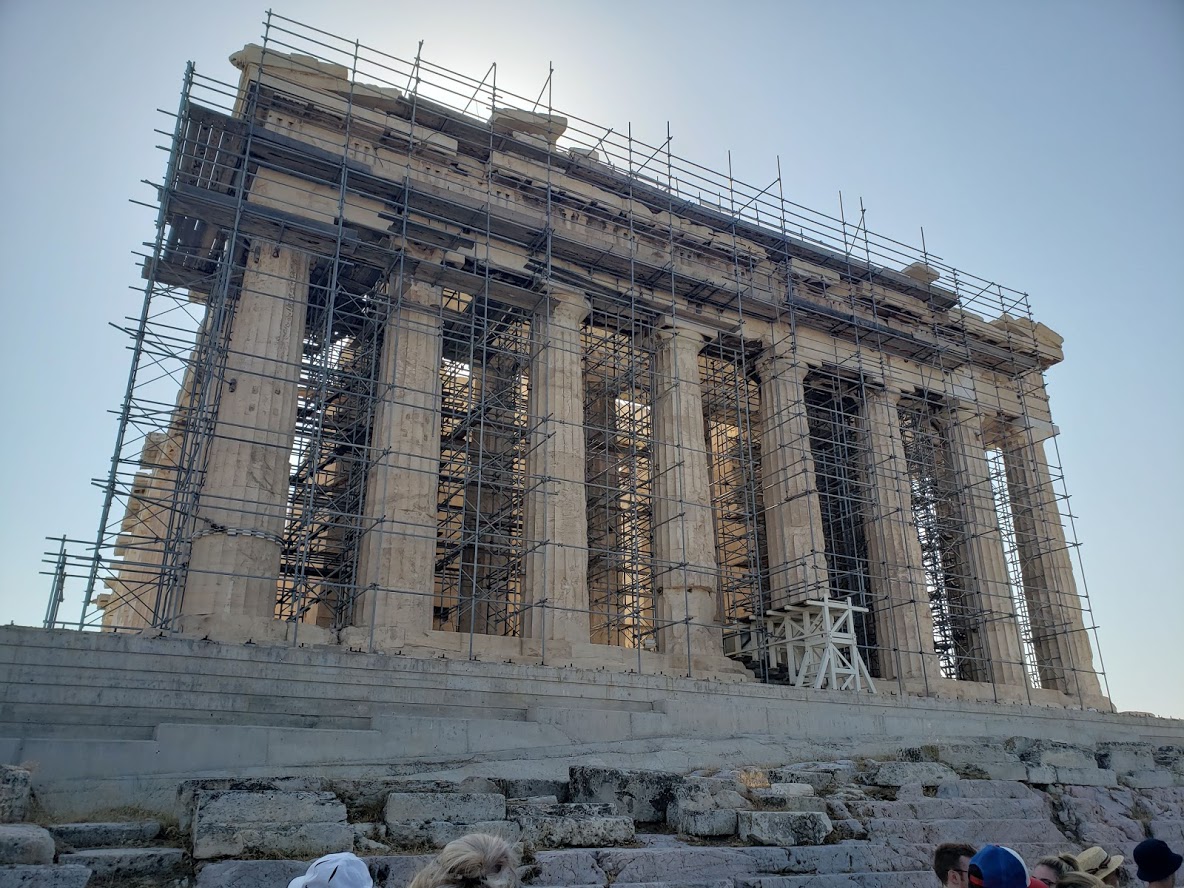 Being restored – kinda spoiled photos – but glad they are going to restore it.

Ready to take some photos at the top!

Try to imagine the scaffolding gone… 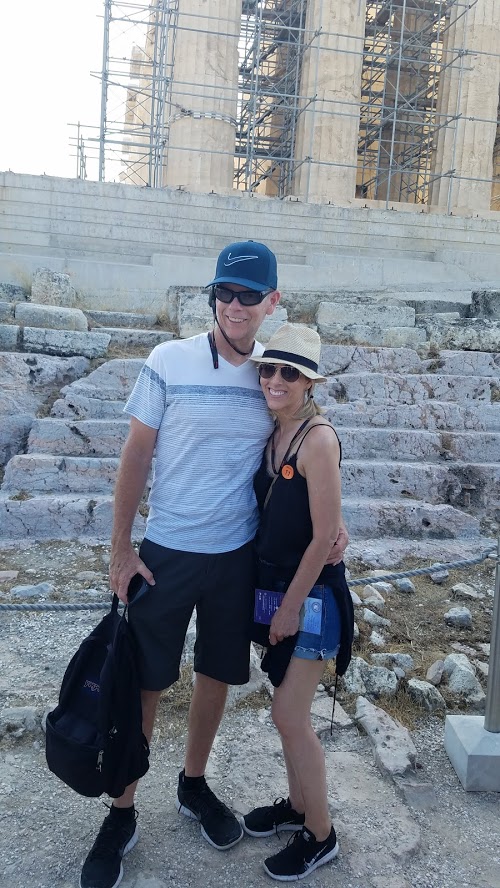 This side already had the restoration completed.

More of the historic monument.

Construction of the elegant temple of Erechtheion in Pentelic marble (421–406 BC) was in accordance with a complex plan which took account of the extremely uneven ground and the need to circumvent several shrines in the area. The entrance, facing east, is lined with six Ionic columns. Unusually, the temple has two porches, one on the northwest corner borne by Ionic columns, the other, to the southwest, supported by huge female figures or Caryatids. The eastern part of the temple was dedicated to Athena Polias, while the western part, serving the cult of the archaic king Poseidon-Erechtheus, housed the altars of Hephaestus and Voutos, brother of Erechtheus. Little is known about the original plan of the interior which was destroyed by fire during the first century BC and has been rebuilt several times. – Wikipedia

Then we walked down past an ancient theatre and returned to our bus to go to the Plaka area which is an historic shopping district. Adam’s mom was disappointed because she had been here 10+ years and it had changed so much from how she remembered it. 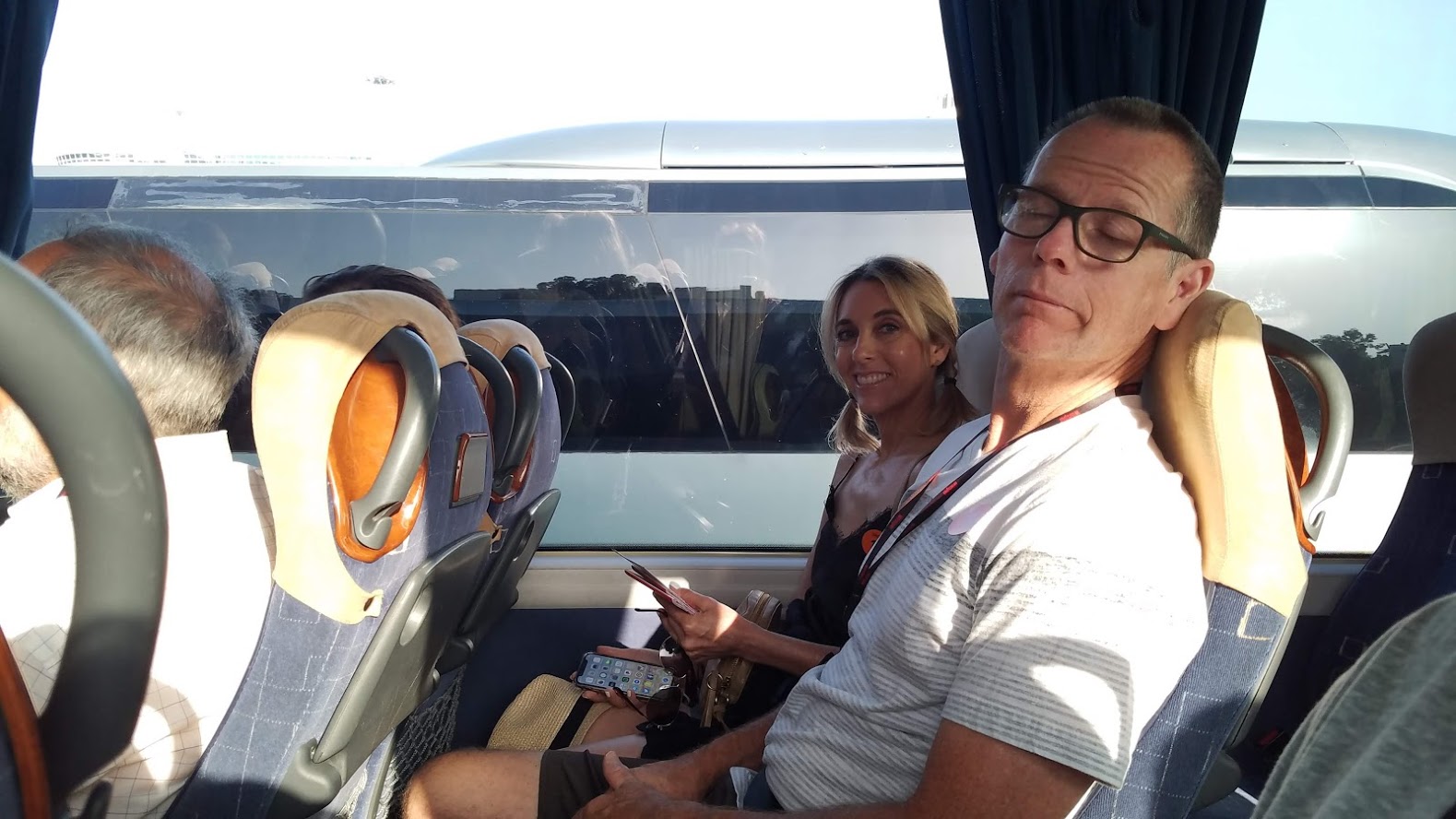 Back on the bus! It felt good to cool off – it was a really hot day!

One of the venues from the Olympics

Near the entry area of the Plaka.

There are many of these tiny ancient churches throughout the area.

We shopped around for a while and couldn’t find any lunch places that we thought could serve us with the short time we had there so we just had KFC. It was actually pretty good! 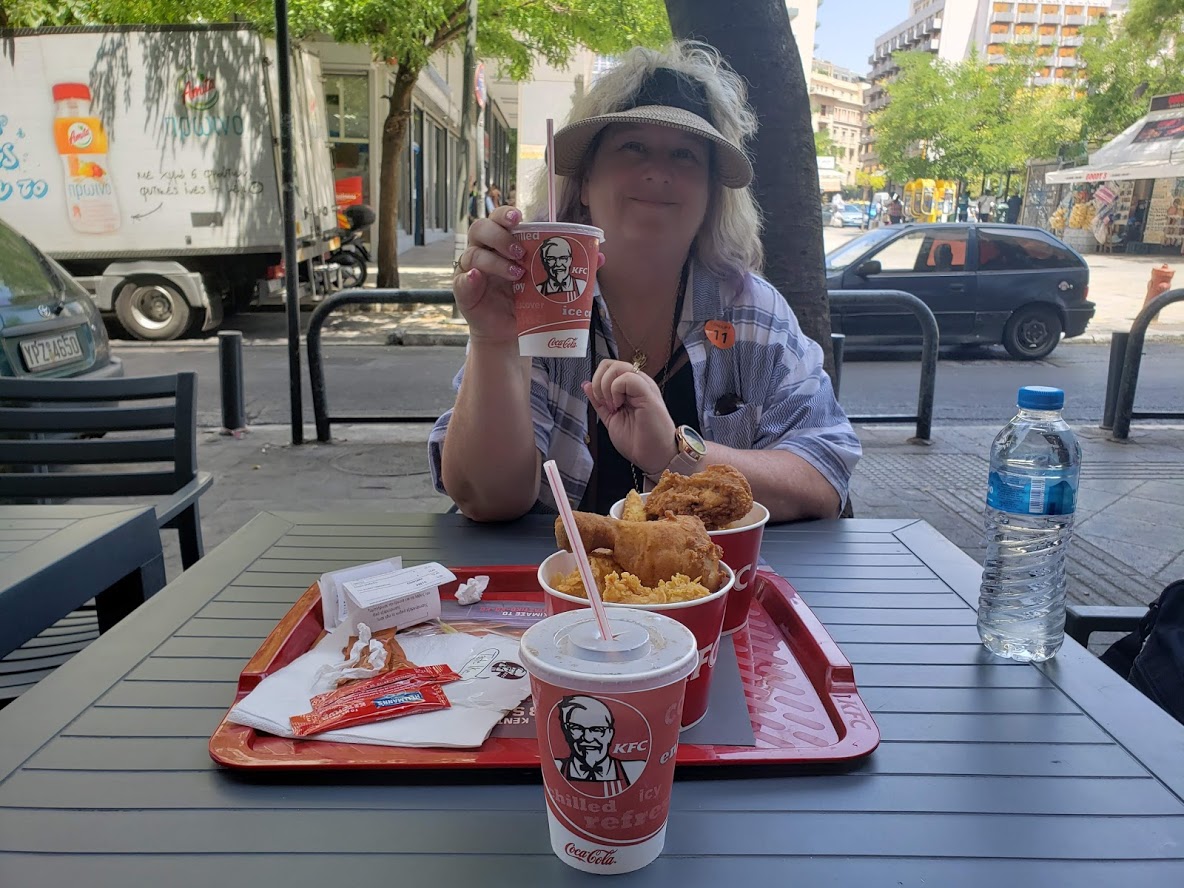 After that we returned to the ship for dinner and had a relaxing evening.