Departure day is finally here!  Art (Adam’s dad) was kind enough to take us to the airport, so we didn’t have to worry about our car at the FlyAway lot. 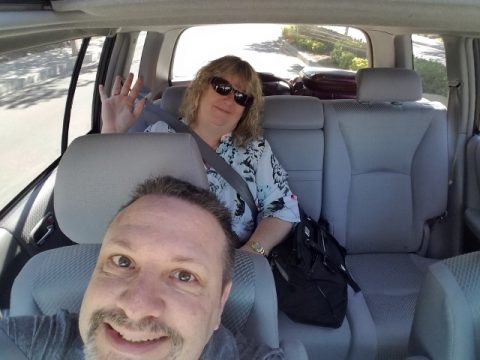 Traveling to the airport in style (thank you Art!)

Our flight was leaving LAX via SAS (Scandinavian Airlines) @ 2:15 pm.  Our first experience with flying SAS and Business Class.  The seats were pretty amazing.  Adam and I each had our own private little pods next to the windows.  He was in seat 02 and I was in seat 03. (Seat 01 was occupied by a celebrity – the actor – Nikolaj Coster-Waldau – who plays Jamie Lannister on Game of Thrones).  The seats had a myriad of controls and buttons.   They would recline or even lie flat.  We each had a big screen multimedia system – with movies and entertainment.  I didn’t really find many interesting movies – but watched a couple.

Here’s our ride – via SAS airlines! 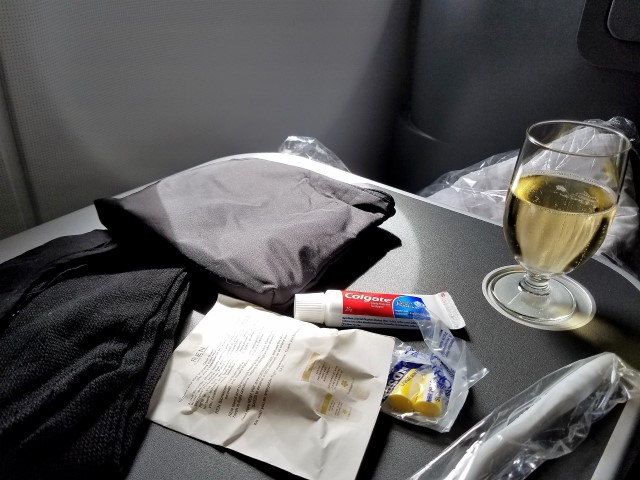 We each had a nice little ‘care package” waiting for us at our seats – they had things like toothpaste and socks – cool!

Here’s Adam – settled in his ‘fort’ for the long ride.

Shortly after take-off, they brought me a nice bowl of warmed assorted nuts and a soda – yum! 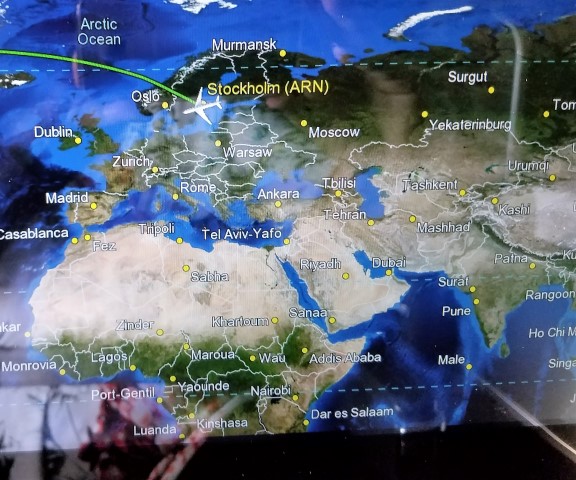 We thought we were going to be able to sleep onboard, but neither of us got much sleep. The service was good, the food was good and the seats were comfortable – just couldn’t sleep.  I think we both agree that we would have been a little more comfy and maybe even been able to sleep, if we had a little better ventilation.  At times it got a little too warm, and we are used to having a fan that we can control the flow of, on a plane.  Also, since the flight was at 2:15 it really wasn’t “sleep time”. We met some folks on our flight that were also going to be on our cruise. 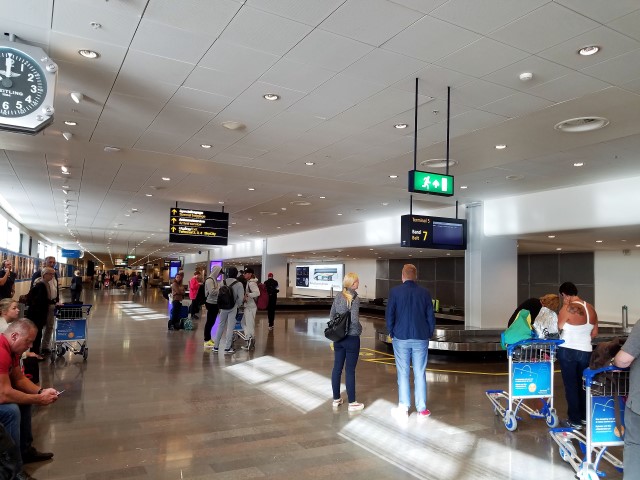 At the airport, waiting for our bags…we met some nice folks on our flight too – that were also going to be on our cruise. 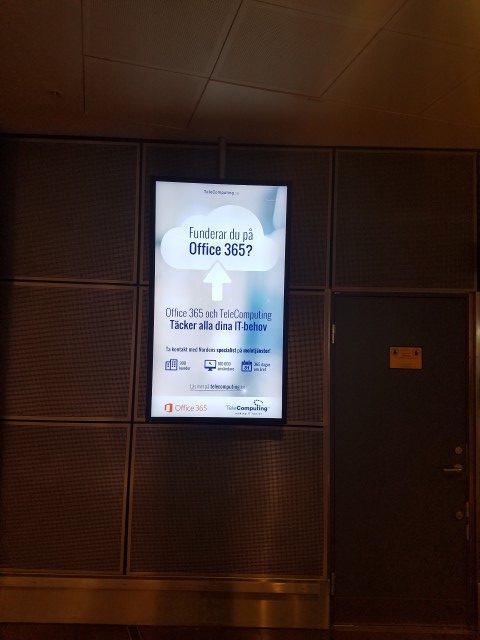 While waiting for our ride to the hotel – Adam noticed this sign… last thoughts of Microsoft for a while!

On our way home, we will fly on Virgin Atlantic – also on ‘upper class’ so we’ll get to try another pampering experience in the air.

We arrived in Stockholm Sweden around 10:00am and were met at the terminal by representatives from Regent Cruises. They had arranged for a taxi for us to be taken to our hotel.  We enjoyed a quiet 30-ish minute drive from the airport to our Hotel, and even though we were there quite early, our room was ready, and we were able to check in right away.

Some of the scenery on the way to the airport

View from our room – a little courtyard in the middle of the hotel – for pets? Kids? 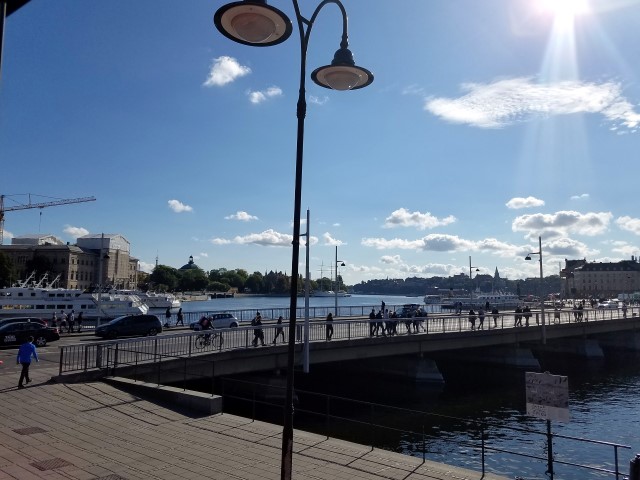 Once we were checked in, and made sure our luggage arrived with us, we set out to explore Stockholm.  The representative from Regent cruises recommended a “Hop-on/Hop-Off Bus” tour, that had a stop just about a block away from our hotel.  (Something to be aware of if you ever travel to Stockholm – there are two companies named “Hop On – Hop Off” and they are competitors – it’s rather confusing – you need to make sure to go to the ‘right’ buses and the ‘right’ water taxi stops  – and they were not very nice to you if you displayed their competitor’s ticket).

We walked over, and chatted with the ticket salesman.  He showed us that we could purchase tickets that would allow us to hop-on/hop-off for 24 hours – and we could also take a water-taxi portion of the tour as well. We purchased the tickets and embarked on our tour around the city.

Waiting for the water taxi 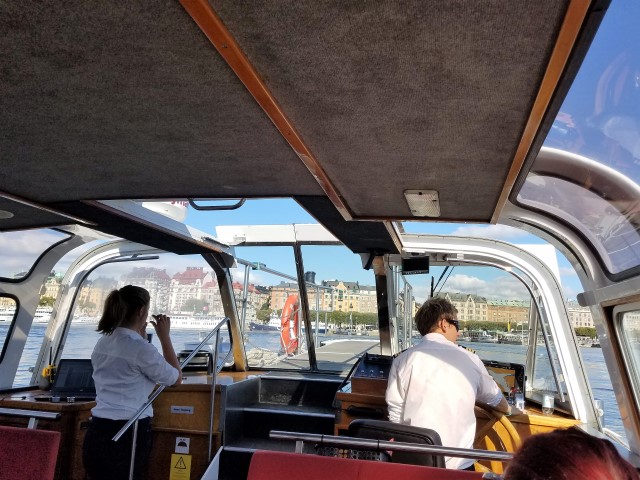 On board the water-taxi – it was the perfect day for this tour! 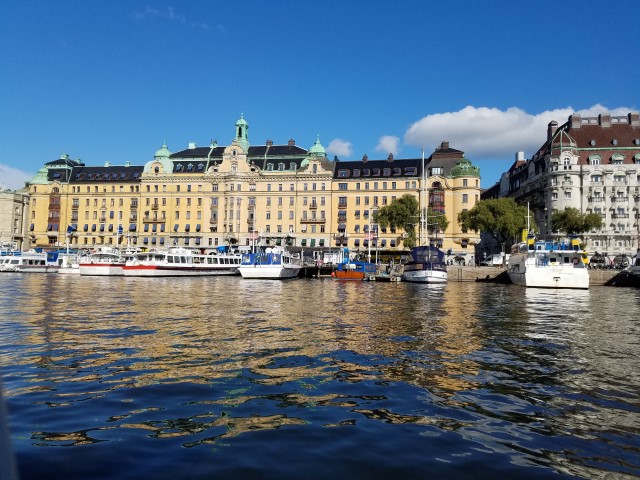 View from the water

The highlight of our day’s tour around the city was the Vasa Museum.  The Vasa was a sailing ship that sank on her maiden voyage in 1628. After 333 years (in 1961) she was salvaged and has been 98% reconstructed.  She’s there in the museum, in all her glory.  It’s quite interesting to see up close – it was a very ornate and decorated ship with many carvings and ornately painted characters on the hull.   The ship sank because of poor design – she simply tipped over and sank.  30 souls (of the over 400 on board) perished with her.  The wreck was very well preserved, they were even able to salvage some of the main sail material.  The bodies of the people who died on board were also salvaged – and the conditions of their skeletons tells the story of how well-nourished people were in that age. 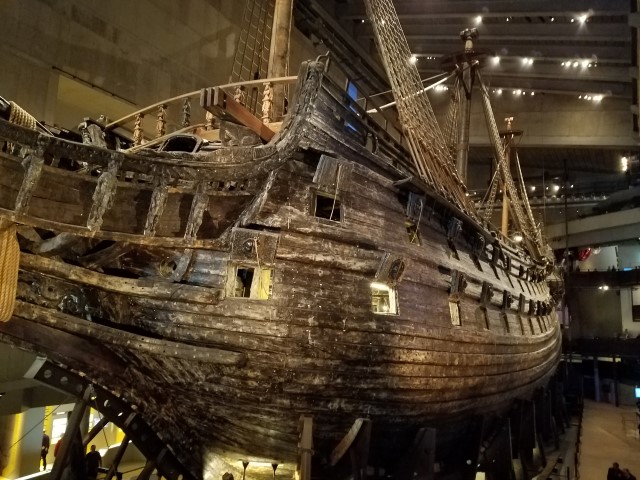 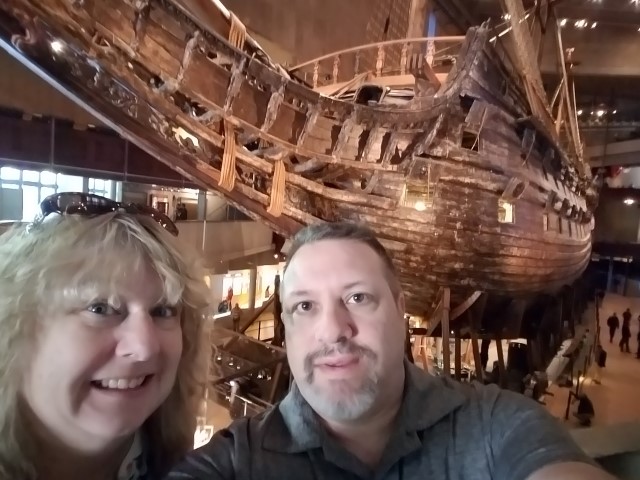 Here we are at the Vasa Museum 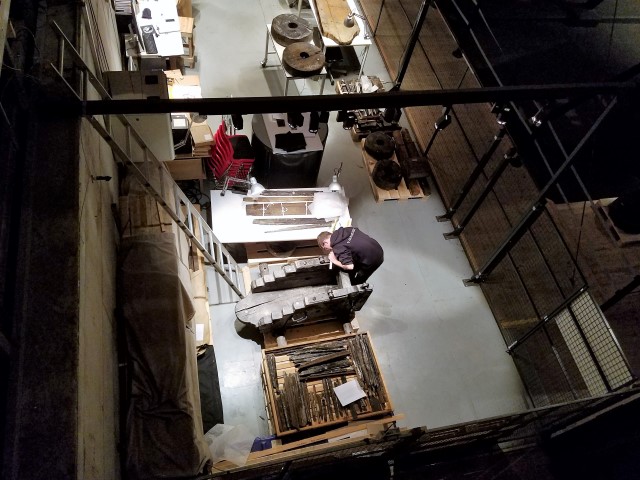 They are still actively doing restoration work. Here was a fellow doing some of the work 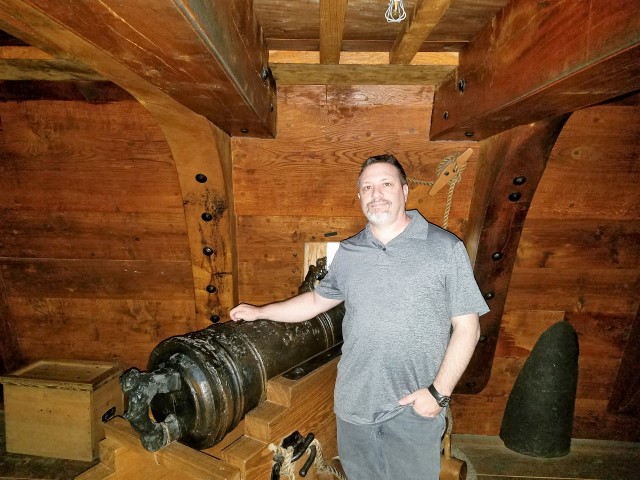 Some of the intricate wood work 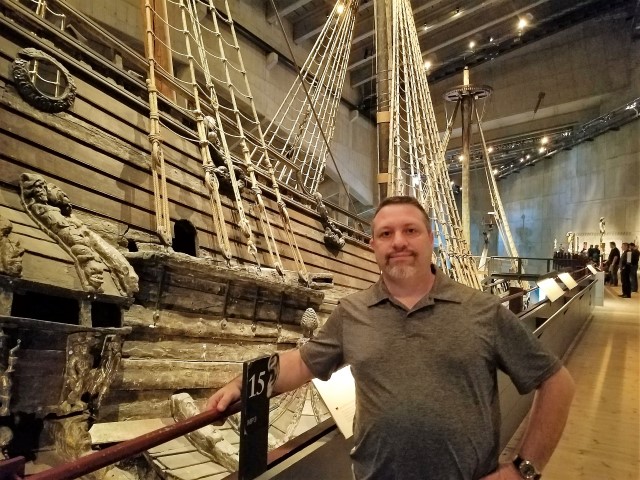 Adam and the Vasa

Susan and the Vasa 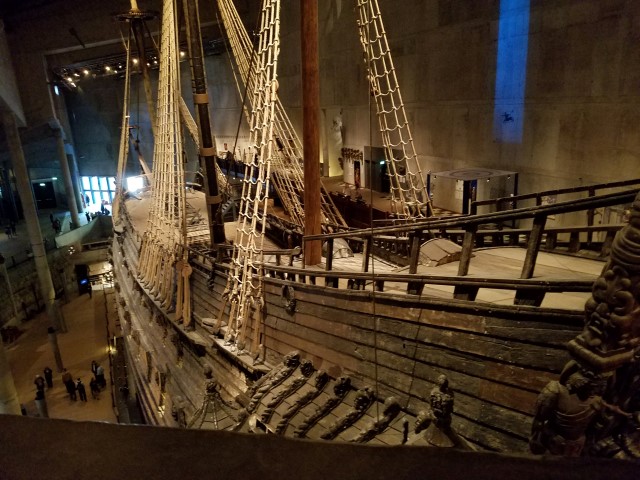 We enjoyed our visit to this museum quite a bit.

After our tour of the Vasa Museum, we caught the water taxi and continued our tour around town.  We were both pretty jet-lagged so after we finished our tour, we had an early dinner and headed back to our room at the Sheraton Stockholm.  It was a quiet and comfortable room and we both fell asleep rather quickly.