We all met early in the morning for breakfast and had no tour scheduled because we wanted to explore together.  Art and Cheryl had been here before, and wanted to re-create a photo near the iconic windmills, and as we arrived, we could see them in the distance.

We disembarked, but it was in the more ‘working harbor section’ and not near the area we wanted to explore, so we walked over to the nearby water taxi and took that over the Mykonos Harbor (windmills).

The view as we disembarked.

Getting in line for the water-taxi.

We walked around the quaint, charming, and beautiful little city and when we stood near the waterfront a big wave came and soaked some of us… it was great!.

Cheryl just before we got drenched! 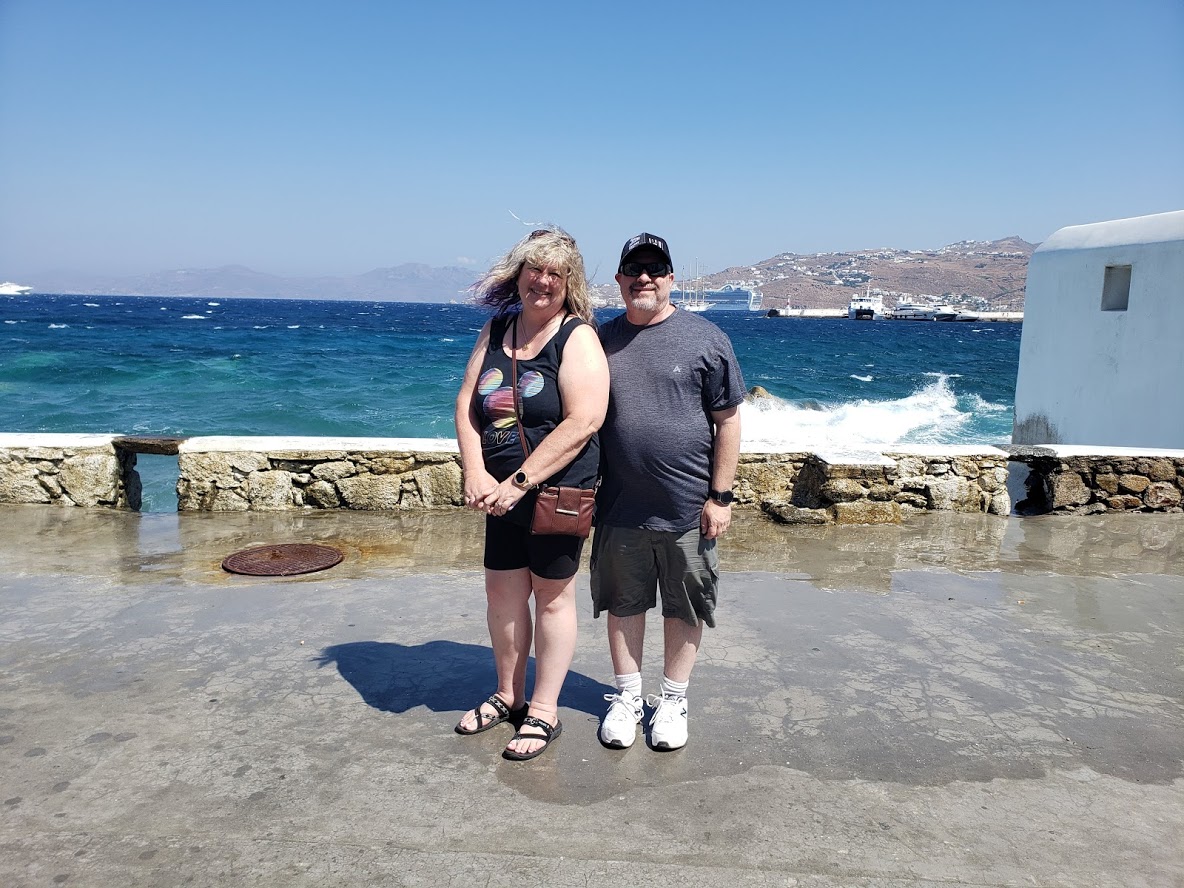 Adam and I before we got splashed

Cheryl and I walked a little too close to the waves (sort of on purpose!)

We got splashed – and we loved it – the water felt nice!

It was such a beautiful day! 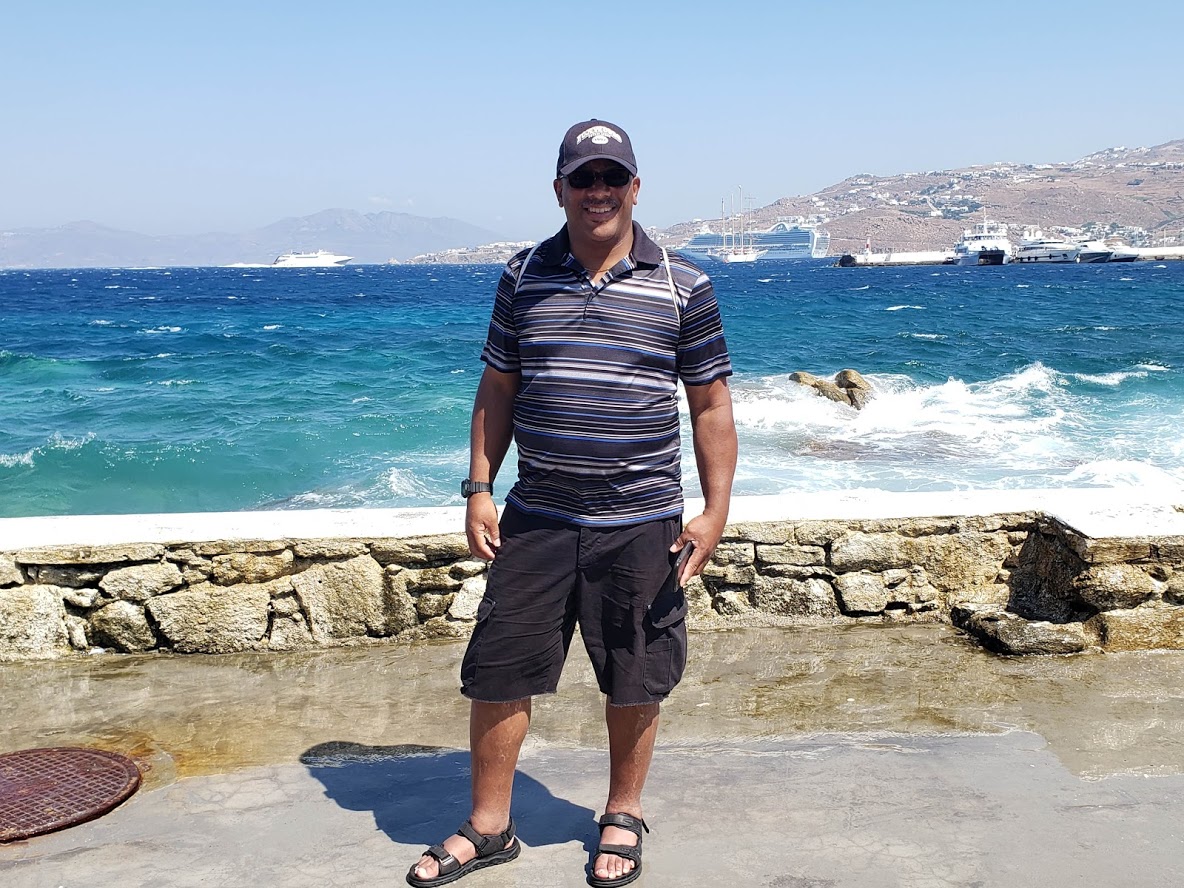 Murray with the waves behind him. 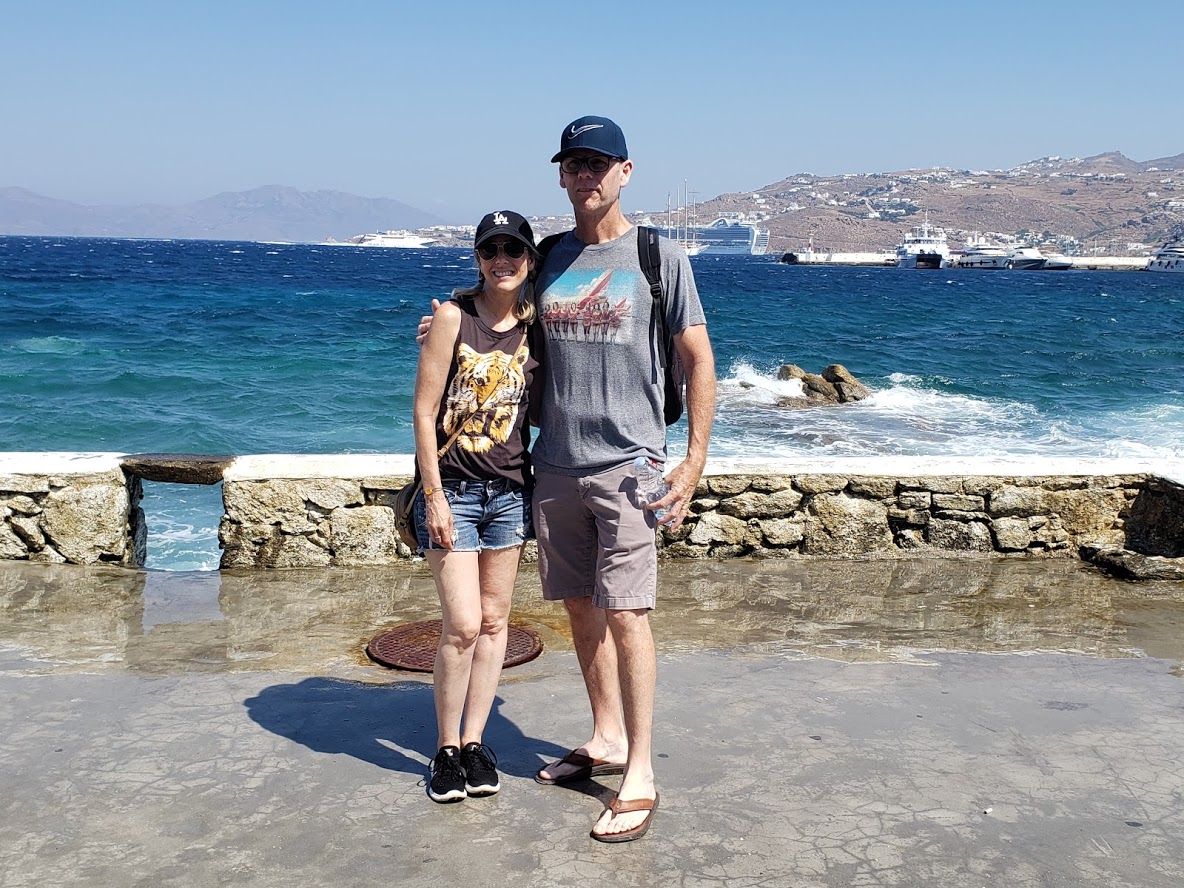 Bonnie and Steve took advantage of the nice photo opportunity too!

Bonnie attempted to pet a cat and got bit (Don’t pet the cats here! The locals told us they love the cats but they don’t touch them).

Not the cat that bit Bonnie, but we saw a lot of cats all over the area.

I think this is the culprit that bit Bonnie!

They we walked over to the famous Mykonos windmills and took many pictures! 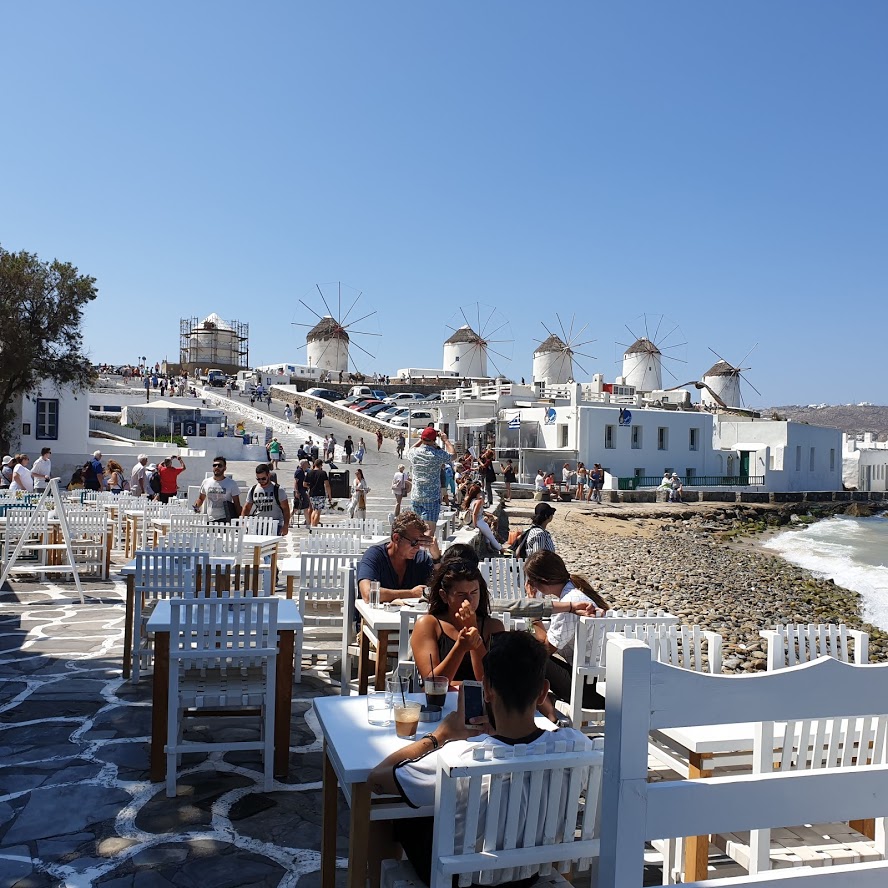 We walked along the water to make our way to the windmills.

There was a man with a mule, charging folks for photos – we took a sneak photo as he was grabbing lunch!

The Mykonos windmills are iconic feature of the Greek island of the Mykonos. The island is one of the Cyclades islands, which neighbour Delos in the Aegean Sea. The windmills can be seen from every point of the village of Mykonos, the island’s principal village, which is frequently called the Chora on Greek islands. – Wikipedia

Adam and his dad – long awaited photo! I think his dad is working on editing a copy to edit out the other folks…

Bonnie and Steve at the windmills too.

After our photo op at the windmills, Bonnie and Steve had plans to go to paradise beach and Murray wanted to go with them but forgot his swimsuit so he went back to the ship to get it.  While we waited, the rest of us had lunch (we had another burger).

Bonnie and Cheryl checking out the menu.

The lovely water-side restaurant where we had lunch. 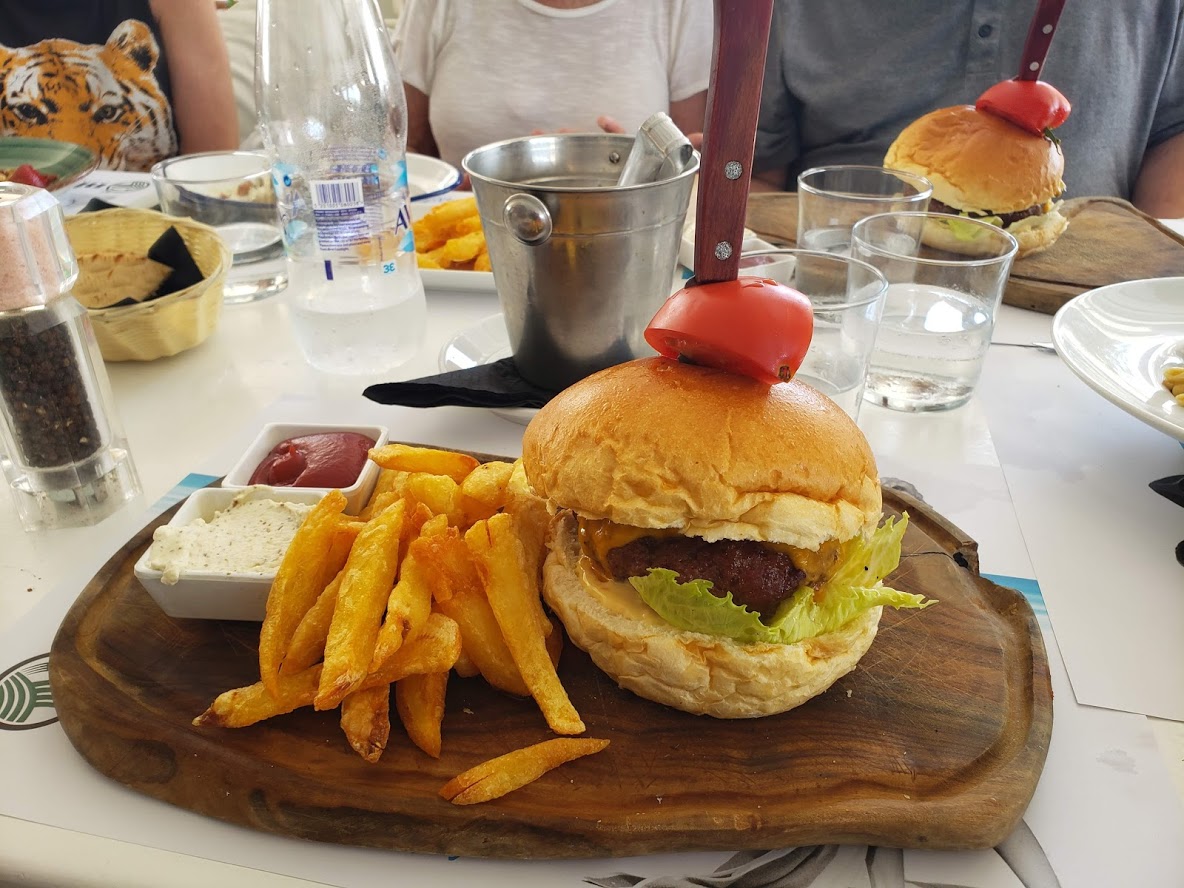 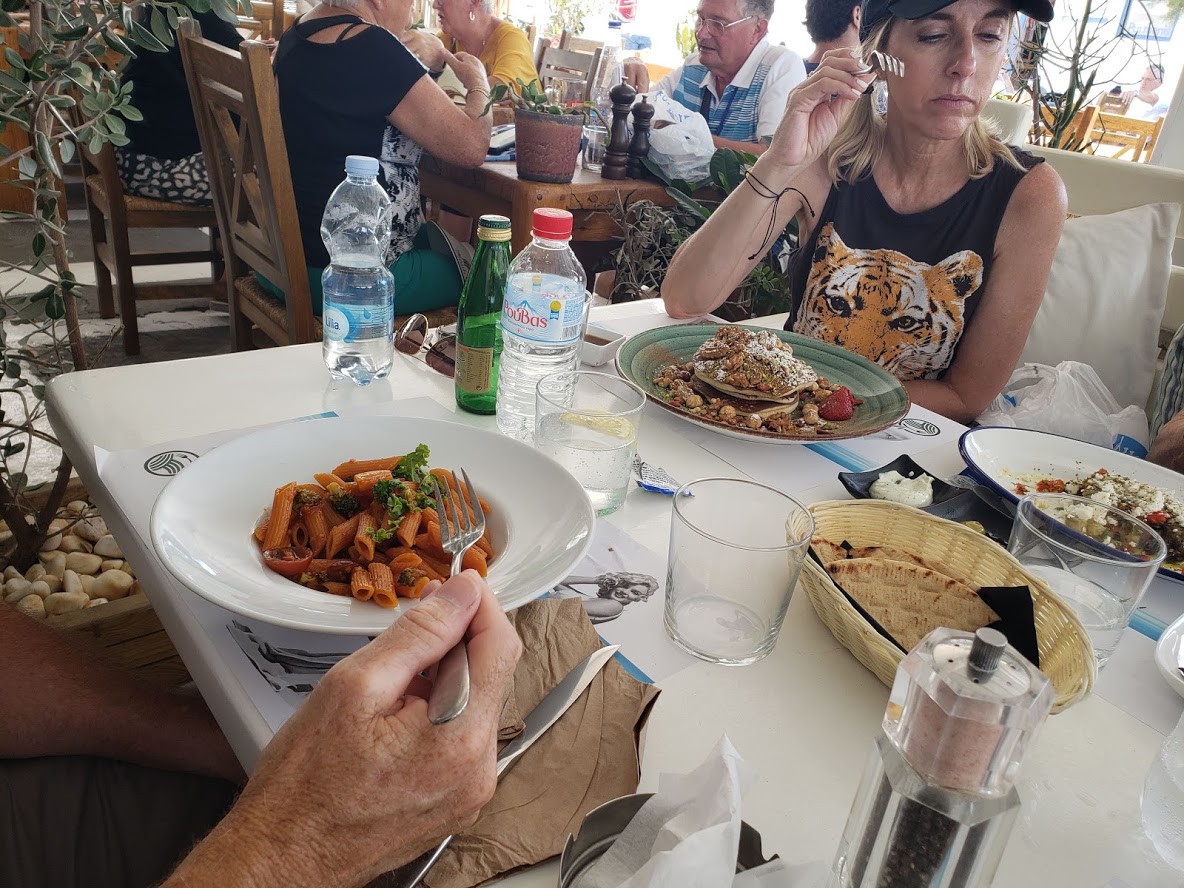 We poked around in the shops a bit more and found some nice hats.

We returned to the ship to relax and later that evening we had a nice family dinner then we went to bed early as we had another early port of call.