We get up early this morning so we could see as much of New York as possible here on our last full day. The plan is to go
downtown to the financial district and see Rockefeller center and the Stock Exchange and from there we aren’t really
sure. Kevin wants to see Chinatown so perhaps we’ll do that.

We arrived at Rockefeller center and saw them wrapping up from filming the “Today” show. We also shopped around the NBC store for a little bit. 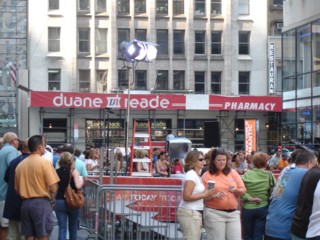 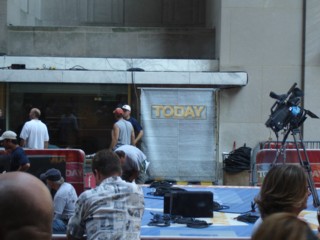 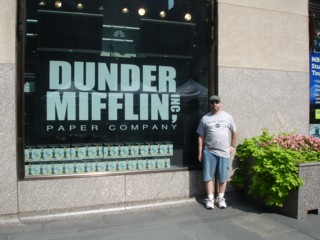 Rockefeller center, where they filmed the “Today” show, and Adam hanging out in front of the NBC store.

We weren’t far from ground zero and most of us had not seen it so we decided to go there using the subway. 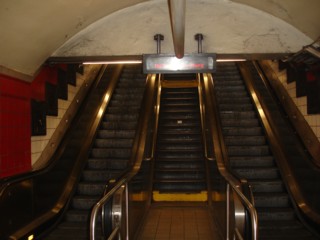 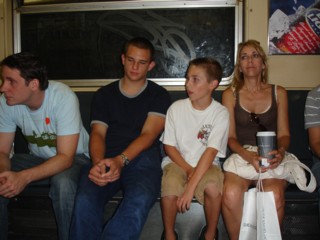 On the subway heading to ground zero.

It was a eerie sight and we went through a ground zero memorial that was really sad. It’s amazing how large these buildings were, what a feat of engineering it was to create them, and how quickly they were destroyed. The stories that were told in the memorial were sad but very interesting. 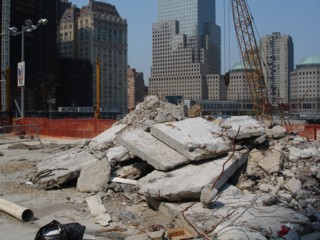 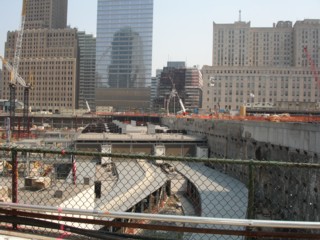 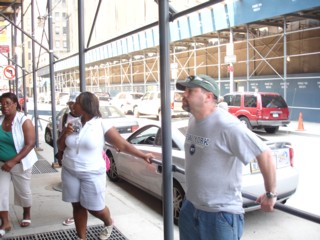 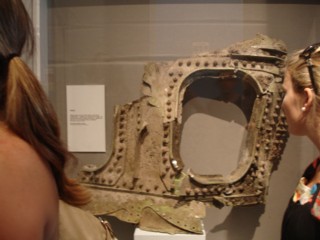 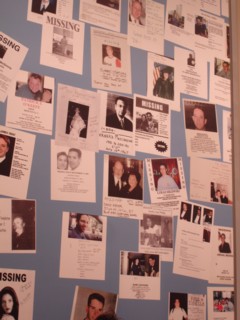 Some photos of ground zero and from the 9/11 memorial.

After that we went to the NYSE which shortly then went down 280 points! 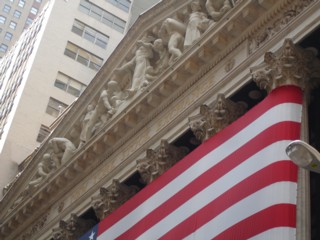 We also walked over to the Merrill Lynch bull and then finally over to Battery Park. 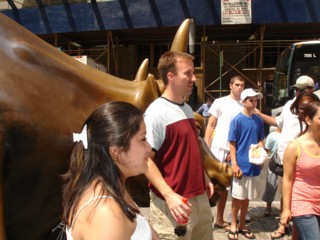 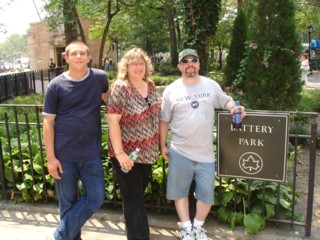 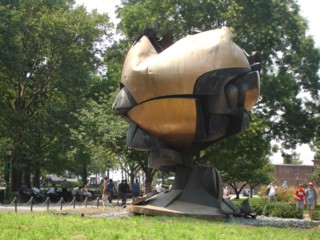 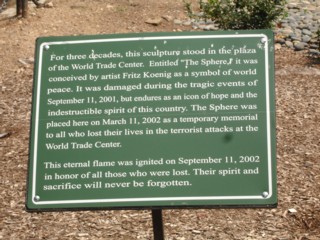 The first photo is of the Merrill Lynch Stanley bull. It was way too crowded to get a picture with us in it so we just snapped this one. The next picture is of Kevin, Susan and Adam at Battery Park. The bottom left photo is of a sculpture that stood in the plaza of the WTC. The sign gives more info.

Then we decided to head over to Chinatown but after an unsuccessful attempt at a subway ride there we went over to Chinatown via cab. We went just to look around there but it really wasn’t a very exciting place. For the most part is was extremely crowded and mostly people just sold cheap goods. We saw some people getting arrested and we just really didn’t feel very comfortable there so we shopped around for a little while, had lunch, and then took the subway back to our hotel (taking the subway back was much easier). When we got back Susan decided to go with some of the others to Macy’s to do some shopping and look for an extra luggage bag (we bought too much stuff!), Kevin decided to relax in the hotel and play his video game, and Adam decided to go with Steve and Jack to the Yankees game. It was threatening rain and we didn’t have tickets but we decided to chance it anyhow.

We took the subway that took us right into Yankee stadium but we couldn’t find anyone selling tickets. We asked a cop where to buy tickets and he said that he thought the only tickets left were box seats that would run around $140 a piece or he would give us some free tickets he
just happened to have if we don’t mind sitting in the bleachers in the “no alcohol” section. Perfect! 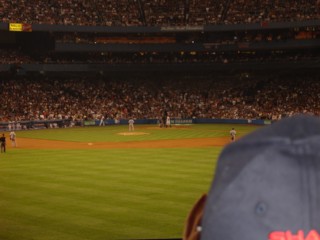 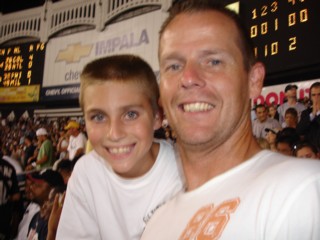 Our seats to the Yankee game. Not exactly close to the action but we were happy with them. Jack and Steve are enjoying the game.

The Yankees played very well and won easily but the real excitement of the game was Alex Rodriguez and his quest to be the youngest player ever to hit 500 home runs. He was at 499 while we were there and every at bat brought people cheering and flashing photos. We thought we’d have a shot at catching the ball if he hit it out there but we figured our chances of getting killed doing it were also pretty good. Unfortunately he never hit the home run and we heard thunder around the beginning of the 8th inning and decided to head back before the subways were too crowded. It was a really fun night.

Tomorrow is our last day in New York. We hope to make the most of it!