Another day at sea! More time to relax and enjoy. We sleep with the door to our patio open at night (even though they ask you not to) so we can hear the sounds of the ocean. Last night was just perfect and the weather was great. We are having such a good time.

Up in the morning for breakfast. If you remember yesterday they sang “Happy Anniversary!” to us, well something interesting happened the 2nd day we were on-board that I should mention. 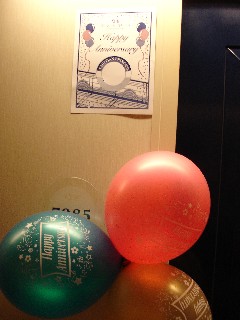 Happy Anniversary balloons and a sign on our cabin! This was very nice, even though it was our honeymoon. No matter, it’s the thought that counts. We had considered letting them know but it really didn’t make much of a difference to us. We considered this to be our 0 anniversary. So there you go.

After breakfast at the buffet Susan went to check out a Hawiian shirt sale in the shops, and Adam went to talk to the computer guy on board to see if he could get a tour of the ship computer network. We were able to get a couple of nice Hawiian shirts, but Adam wasn’t able to get his tour. The ship wasn’t comfortable with someone near their main computer systems what with hackers and all. It’s understandable.

Around 11:30 or so we went back up to the pool where Susan went for a swim and laid out in the sun while Adam messed around with the Ipod at a nearby table. It was a very very nice afternoon and the weather was perfect. The pool was a bit crowded and the seats were limited, but everything worked out just fine. 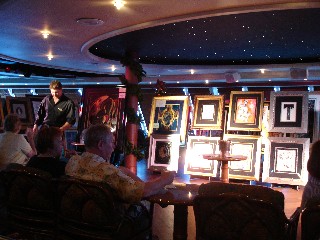 Time for the art auction again! On the morning’s “Princess Patter” which is the daily schedule of events it said of the art auction “Come see who wins the 1.6m work of art!” so we had a hunch they were going to play the whole ear tugging thing again. The previous day when they had a raffle for a free painting there was a painting of 2 cats by a fireplace that was pretty nice, and Adam wanted it! So perhaps we can win it today? 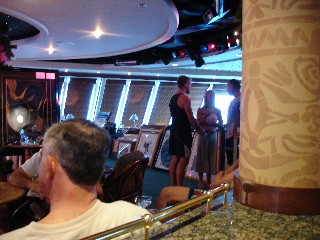 Another photo of the art auction. As it turns out the show started with a “mock bidding round” for those that hadn’t been there the day before and so in the mock bidding around they started at $1 and were slowly working their way up .. and up.. when it got to about $1.5 million Adam whispered to Susan “tug your ear” and she did and viola! another free painting. Susan was the amazing winner of the 1.6m work of art! Wahoo! So she picked out the cat painting. 2 free paintings in 2 days. Wahoo!!

The art auction was very nice but we still didn’t make any big purchases there. There will be one more art auction in a couple of days, we’ll see what happens then. For this auction, however, there were 2 small beach paintings that were very nice and Susan got both of them for $30 total. They are beautiful paintings and we can’t wait for them to arrive so we can hang them up.

We had a special event planned after the Art show. We were going on a tour of the bridge of the ship! Shhh! This is a secret tour, don’t tell anyone. We went down to the main lobby where we were to meet the person who would escort us to the bridge. While waiting down there we met 2 other couples that where also invited to see the bridge.

This was in the lobby while we were waiting. This is a paper chart from the last cruise that is signed by all the bridge crew that plotted our course and other information. It was really cool to check out. It’s HUGE! It said it would be auctioned off later. We’re not interested, it was just amazing to look at. In the day of computers it was somewhat refreshing to see something being done the old-fashioned way.

Unfortunately, most of the photos of the bridge tour came out blurry for some reason. This is a shot of Adam and the wheel! The ship was locked on computer control (auto-pilot) so the wheel did nothing but heck, it sure looked nice.

A couple of photos from the bridge. This is not a panorama, just 2 shots close together. This does give you some idea though of what it looked like up there. It’s almost all computer controlled and the first officer of the ship was nice enough to explain what everything did and how it worked. He was very nice and patient with all our dumb questions. 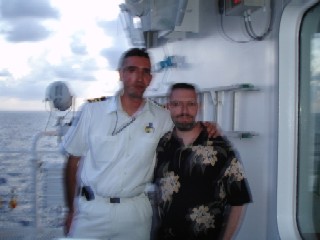 Yeah, it’s a terribly blurry picture. Well take our word for it when we say that’s Adam and the first officer. We are out on the side of the bridge where they stand when docking the ship. It is actually pretty interesting. 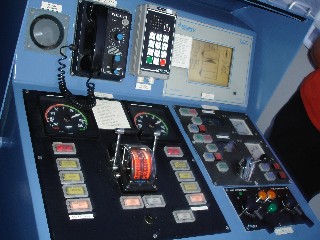 The ship may be computer controlled, but here was the paper map and it was all marked up with information about our journey. The map said nothing about buried treasure or “Pirates attack here!” – that was a bit disappointing. The bridge tour was very nice and it was great they let us do it.

Time for dinner, and instead of going to the normal dining hall we instead had reservations and the Sterling Steakhouse! There’s an extra cover charge per person to go to this steakhouse but we just charged it to the room! Thanks Art & Cheryl! We both ordered the Filet Mignon and it was extremely good. Susan said “This is the best steak I’ve even had”. Wow! Now that’s an endorsement! It was extremely tender and cooked perfectly. Just when we thought the food couldn’t get any better. It turns out this was a great night to go to steakhouse, because in the main dining room it was French night with frog’s legs and snails and all that. Yeach!

After dinner we went to see a comedy show starring “Tom Fletcher” who was a pretty funny guy but he told mostly old jokes. His delivery was very good and he had the whole place laughing and it was a lot of fun. We look forward to seeing him again when he did a little more later in the cruise.

Time to call it an evening. We have an all-day shore excursion tomorrow in Nuku Hiva. We are very much looking forward to it.