Up nice and early this morning and we had already docked at Grand Turk! 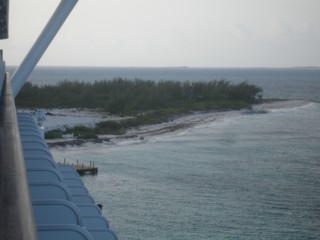 Here’s an early morning shot from our cabin. We docked on the other side of the ship.

We got dressed and had breakfast at the buffet. It was time to go to ashore. We have a snorkeling tour this morning that is supposed to take us to Governor’s Beach. Hopefully it will be nice and not too hot. We haven’t gotten an opportunity to swim in the ocean water yet this cruise so we are looking forward to it and we hope it’s a good temperature. We got off the ship after breakfast and waited for a little trolly to take us to Governer’s beach. 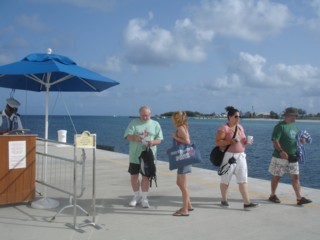 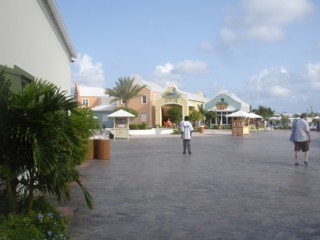 Here’s Art and Bonnie getting off the ship and the area with shops in which we were waiting.

Finally the train/trolly arrived to take us to Governor’s beach. 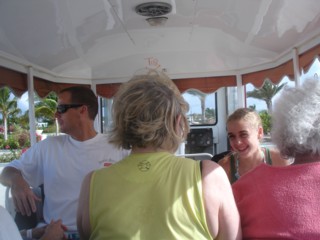 On the trolly. Bye-Bye ship!

It was a really nice beach with white sand and nice chairs to relax in. We got our snorkeling gear and walked down the beach a few minutes to a “better spot” to snorkel in. 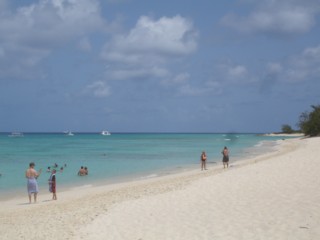 There’s some shots of the beach we were at and Jack trying on his snorkel gear. Unfortunately there wasn’t much of anything to look at while snorkeling which was sort of a let down but the water was nice and warm and we all had fun anyway. After spending a couple of hours there we took the trolly back to the dock and shopped around the stores there for a bit. 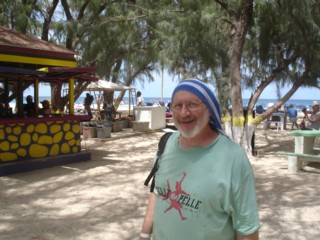 Heading back to the trolly. A local homeless person is in the next picture.. oh wait, that’s Art!

We didn’t buy anything on this island (we are planning to hold our purchases until we’ve had a chance to look around San Juan and St. Thomas). After we got back on the ship we went to lunch and then relaxed for a while around the ship and in the casino. 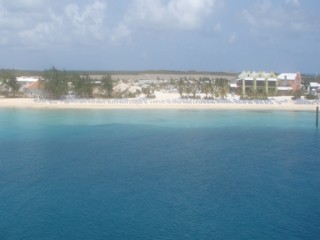 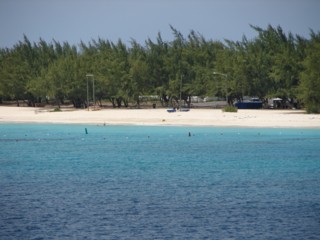 The island sits empty as the ship pulls away. The photo on the top is the beach lined with empty beach chairs wishing for company, and on the bottom is Governor’s Beach which was packed with people only a short time ago.

At 6pm we all met again for dinner and had a nice dinner (the swordfish was really good) and then we went to see Wayne Hoffman (The Mentalist and Illusionist) again. He had another really entertaining show and even Steve had his mind read! Next we went to see the comedian Sarge again who we had seen on the first night and that was another excellent show as well. What a fun day overall! We look forward to San Juan tomorrow!