Today we are in Skagway! We are supposed to go on a train into the Yukon (in Canada) and see some cool things. 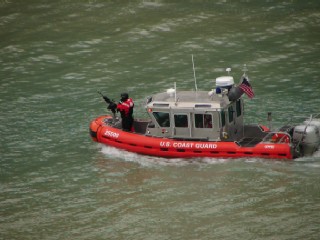 Suddenly we were under attack! Just kidding, this is just the coast guard escorting us in. Not sure why they needed that big gun but I guess you never know when danger lurks. 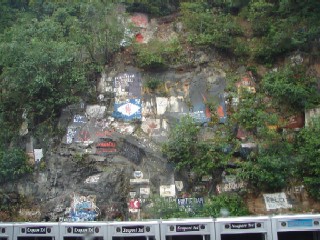 The port here is very interesting. They have a bunch of rocks that are painted in tribute to the different cruise lines and ships that have docked there. We didn’t see anything about our ship.

To our surprise we didn’t get on the train but instead got put on a bus. It turns out we would be getting driven up into the Yukon and then we would take the train back to the ship. 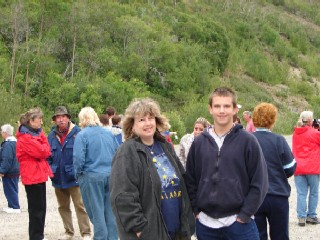 On the left is a photo of Pitchfork falls with the train we would be taking later just going over the bridge. On the right Susan and Kevin are enjoying a brief stop during our journey up. The bus trip was actually a LOT of fun. We stopped and saw all sorts of great things. 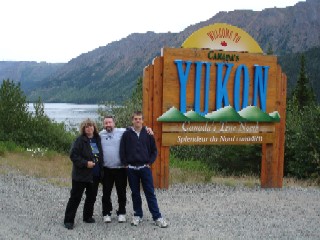 We are entering the Yukon territory! 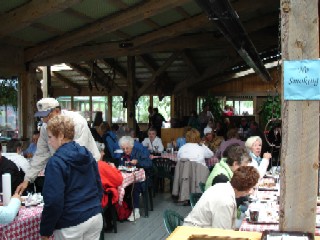 It was time for lunch! We stopped at a place called Caribou Crossing where we were treated to a GREAT BBQ lunch with some good donuts. This place was amazing. It had a full museum of the animals in the area, a dog sledding area, and lots of dogs to play with. 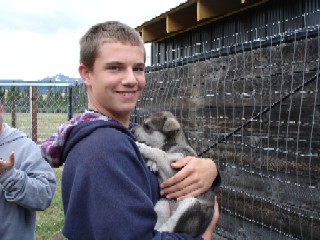 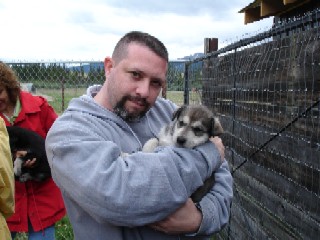 We all got to pet this little malamute puppy. 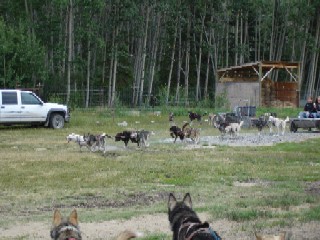 Here is where they had the dog sledding. The sled was on wheels instead of actually pulling it through snow. There must have been 50 dogs there waiting to go and they were all so excited and making a lot of noise. 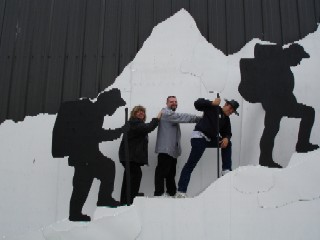 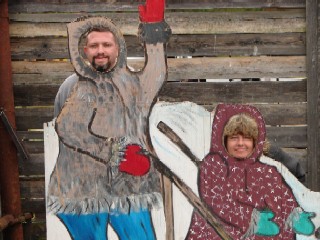 Next we took our hand at doing some Yukon mountain climbing and dog sledding. 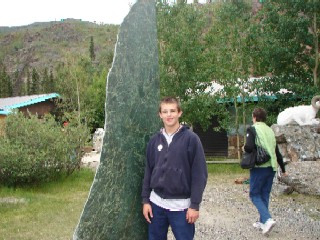 Kevin posing next to a big o’ piece of Jade. Without getting into boring statistics this piece of jade weighs 3000 pounds, was part of a 28 ton boulder found 75 miles east of CarCross (where this place was located) and was cut by Sidrock Co. of Whitehorse, Yukon.

Before we left we snapped a photo of this sleeping puppy. When we first got there he was running around and greeting everyone. When we were ready to leave, he was all pooped out. 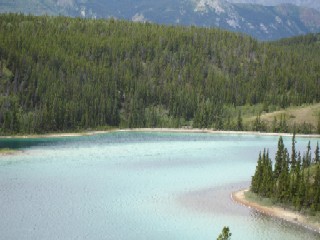 Next we stopped at this beautiful lake. These lakes are made by melting glaciers and they are filled with silt and it gives them a greenish/blue color. It’s incredible to see all the colors. If the lake were to dry up then all the silt is left behind and it looks like sand. To the right is the “smallest desert in the world” and is an example of this. 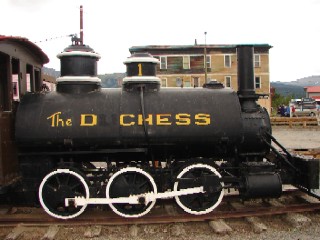 Next we stopped at a little town called CarCross where they had some stuff to look at such as this little train engine, a old wooden bridge, a place to get ice cream, etc. Adam BAREly survived while panning for gold. 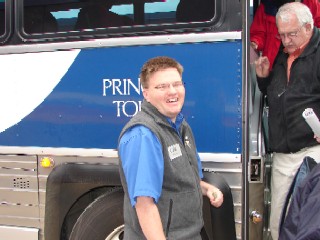 It’s time for the train ride! We said goodbye to our bus driver, Cale. Cale was an excellent tour guide and we enjoyed him very much. Highly recommended. 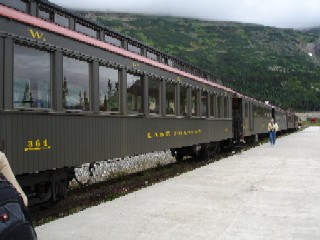 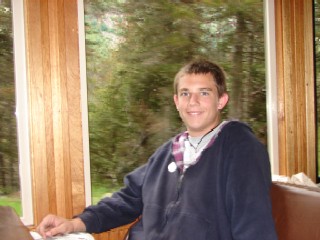 Here we are on the train! The train ride was nice but we actually enjoyed the Bus ride better. The train basically took us to places we’d already seen from the Bus and we didn’t have Cale giving us the great narration. It was still fun though. 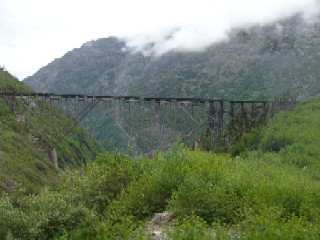 Here’s some photos we took from the train. We did NOT go over that old bridge. It is no longer used. 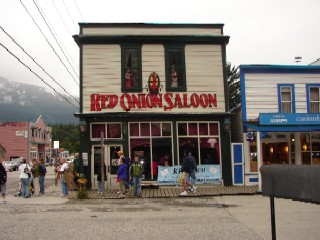 When the tour was over we decided to look around downtown Skagway. Here’s a photo of the famous Red Onion Saloon.

After that we went back to the ship for dinner (it was crab leg night!). Adam and Kevin both ordered additional dinners – they were so good! Next it was show time and we saw a magician called “Romero” and he was excellent! We really enjoyed his show. Then we saw a comedian who was OK.

Time for bed now. Tomorrow we want to get up somewhat early as we will be going through Glacier Bay. A whole day to look at ice! Wahoo!