We have arrived in Port Chalmers/Dunedin! 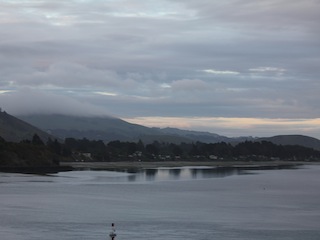 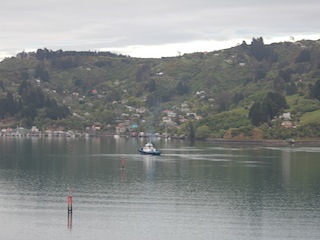 As you can see it was still overcast and cloudy but we docked and got on our tour. We are to go on a tour of a ranch (Natures Wonders) where they have fur seals and rare penguins. Then we are to go to an anqurium. But first things first! We got on the tour bus and got some photos of the city and the landscape as we drove towards the ranch. 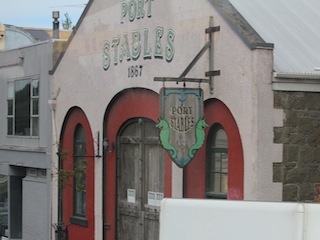 Oh and we drove by the Cadbury chocolate factory. Unfortunately this wasn’t part of our tour but they have a chocolate waterfall and everything. Those that went said they enjoyed it. Maybe next time! 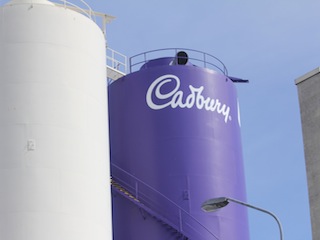 After quite a drive we arrived at the ranch “Natures Wonders”. 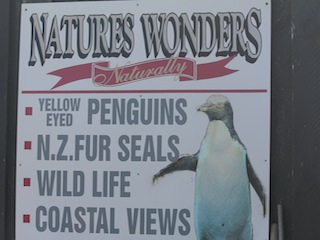 This ranch had sheep and stuff but it was mostly there as a private reserve for Fur Seals and the Yellow Eyed Penguins which the owner has been working hard on for years to help keep the popualtion up. We were told there were less than 200 of these penguins left in the world.

We got in these cool 4×4 vechile and started driving up to get a tour of the facility and see the penguins. 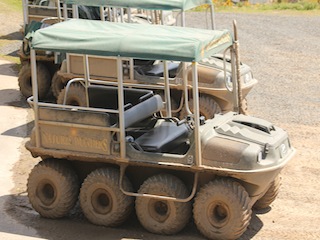 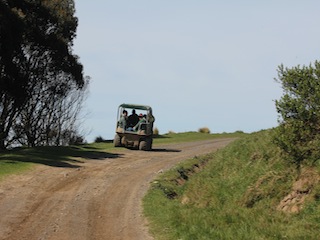 The little vehicles went pretty fast and they handled hills and mud with no problem. They best part is with it being cold like it was we didn’t even get wet or anything. We got some amazing views. 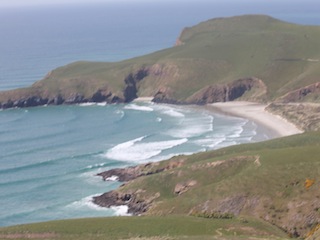 We arrived and saw the beautiful fur-seals. There were about 20 of them and they were playing in the water and sunning themselves on the rocks. They weren’t afraid of people at all and they were very safe being at on this property. At one point, one of the little baby seals just walked right up to a group of us and expected everyone to get out of his way…and they did. 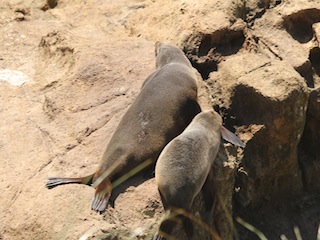 Then we drove over to see the penguins. They are extremely shy and if they see another penguin they won’t nest so they build their nests in the shrubbery and hide away so they can’t be seen. We were fortunate to get a few photos of them. Here’s a zoomed in photo we took. It’s hard to tell but there’s one in there! 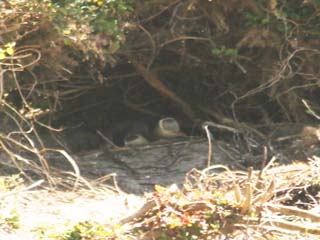 After that we went back to a house on the ranch and we had some snacks. It was an amazing place with beautiful scenery. 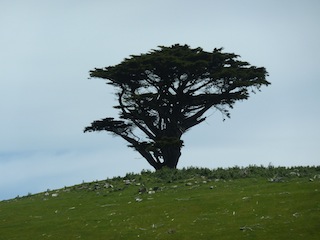 Then we got back on the tour bus and went to the Aquarium. This was a very small aquarium as it is a research/educational facility. They only had a limited number of things to see but they were very knowledgable and told us all about the life of certain kinds of fish and other marine life. 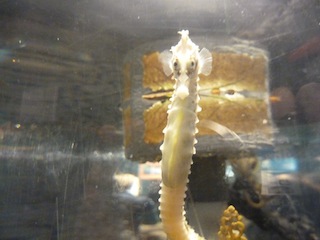 After the aquarium we took the long ride back to the ship as the driver wanted to show us as much scenery as possible.

When we arrived back to the ship it was just about time to leave so we didn’t have an opportunity to explore any part of Dunedin on our own but we had no complaints. We had a great time here!

As the ship left the area we saw some rare albatross on a cliffside. We were too far awasy to get a good closeup but they are the white you see in the cliffside ont his photo. This was also the local lighthouse. 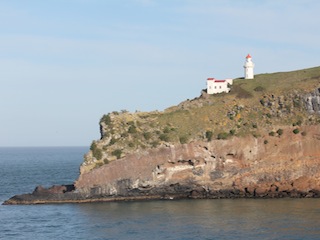 That about does it for Dunedin. We really liked it here and the weather did turn a bit better in the afternoon. Tomorrow we head to Akaroa! 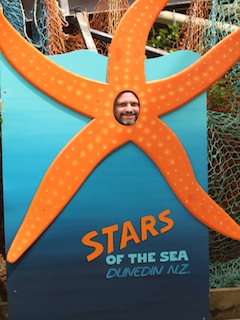