We had to get up plenty early this morning as we didn’t have too much time today. The
ship would let us get off at around 8:30 and some of us planned to go shopping for a few
hours and then the beach for a few hours.. but the ship is needs to have everyone onboard
at 2:30 so it doesn’t leave much time for dilly dallying. We pulled into the beautiful
port of St. Thomas and had breakfast. 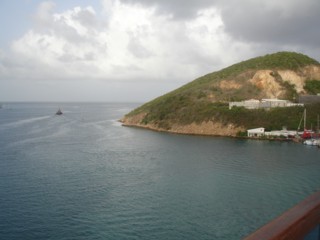 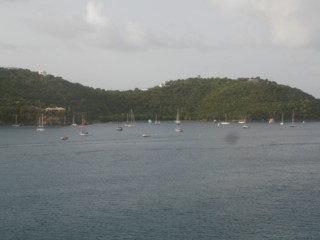 Here’s some nice photos of us pulling into port. Beautiful!

Then we went ashore and waited in the visitor area until we were ready to take a taxi/trolley to the shopping center. 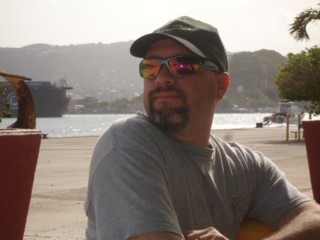 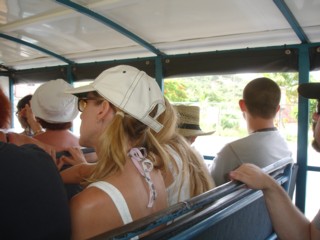 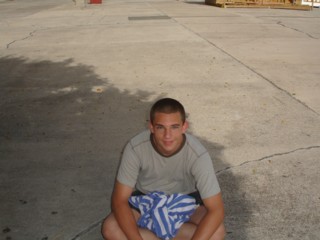 Finally we were ready to go and we took the trolley to the shopping area of the island. 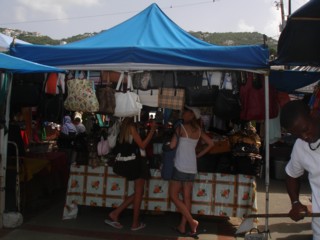 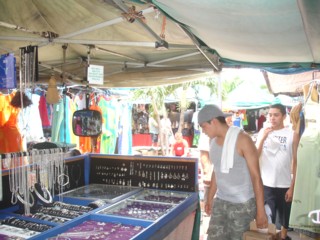 There were lots of tents with merchants selling purses and jewelry at good prices and the gals swarmed all over them. Bonnie and Allison both bought purses and Pat bought a hat.

After a couple of hours of walking around everyone but us (Adam and Susan) and Pat went to the beach. Pat decided to go back to ship. It was very very hot and we wanted a break from the heat. So we explored the shopping area a bit more and Adam had been eyeing a watch since the beginning on the trip and he finally found it at a good price. 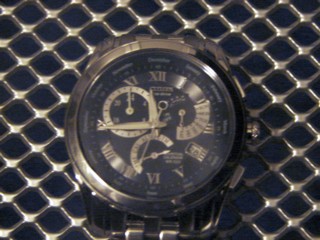 Also we bought a couple of shirts, hats, and sunglasses. Susan went back to the purse people and bought herself a purse. We spent lots of money but we had a really good time and the prices were hard to complain about. After that we went back to the ship and meet up with everyone else. 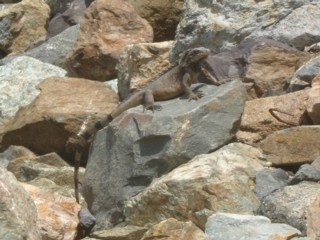 An iguana sitting on the rocks by the entrance to the ship.

We had a late lunch and then we decided to head to the casino for a little while after watching the ship slowly sail out of the harbor of St. Thomas. 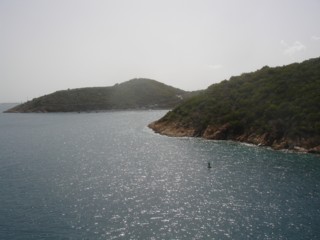 Slowly moving out of the harbor.

After that we had a nice dinner and we picked up some speed heading to our final port Bermuda. As we ate dinner we could really hear the engines working. 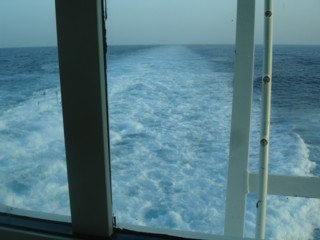 The view of the back of the ship from our table.

The dinner was very good and they even sang “Happy Anniversary!” to us.. oh did I mention it would our anniversary today? Yep! And here we are on yet another fun adventure! After that we hurried down to one of the show rooms where they were getting ready for a Family Feud type game. We all signed up but unfortunately we didn’t get picked to participate. We had fun watching it though. After that it was time for a comedian, Tony Daro. He was very funny and even though he had to deal with a bunch of drunk girls in the front row most of the show he played it very well.

Tomorrow is a relaxing day at Sea! We are looking forward to staying out of the heat but Adam heard the Nascar race is going to be shown by the pool tomorrow. Perhaps he will have to brave the heat!