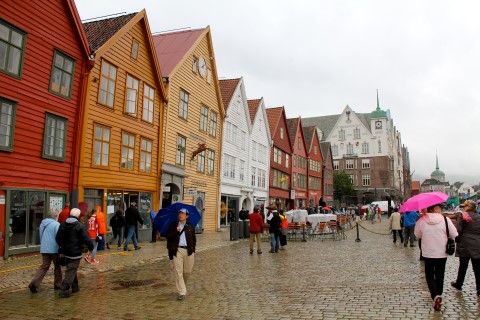 Today we stopped in Bergen, Norway. It is a beautiful city!  As we approached, I realized just how much I had missed the sight of trees… our last several ports, there were no trees. There are lots here.  According to the documentation we were given, it rains 300 days a year here (sounds like the Pacific Northwest!). 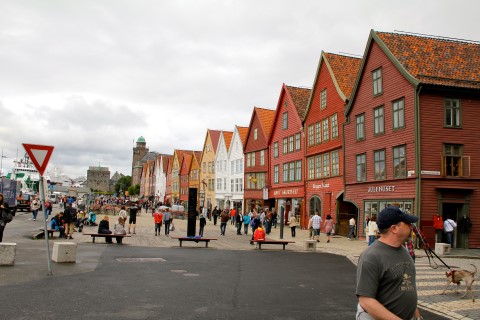 The architecture of the buildings is very interesting, we took a lot of photos!  The photo above, is Adam at the wharf.  Our guide explained to us that this area of the wharf was a ‘monopoly’ area by the Germans during the days of the “Black Plague.”  The residents of the area were too weakened by the plague to fight the Germans, as they set up shops and walled off the area so that local residents could not enter.

It’s hard to tell in the photo, but the buildings are not standing true, they are drooping and sagging and leaning.  Our guide explained that this is because there were frequently fires in these buildings, and when a building would burn, they would push the remains of the building off the end of the wharf into the water and build again…eventually, the debris from the burned and destroyed buildings became even with the level of the wharf, so they started building on top of them.  The buildings shown behind Adam were built on this unstable foundation, and they are showing it in the leaning and listing.  A few of the buildings were not safe to enter, and will be restored at some point. 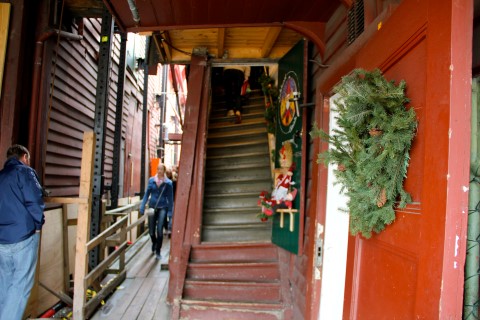 The stairway is very crooked! 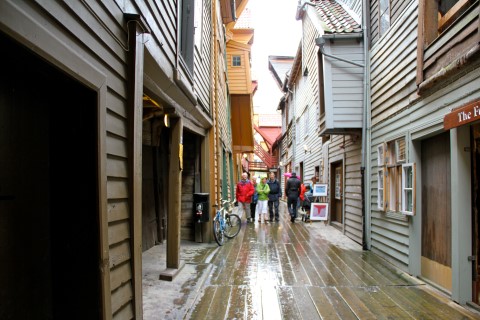 Passageway between buildings. Some of these showed how much the buildings were leaning, but they have been working to stabilize them in recent years 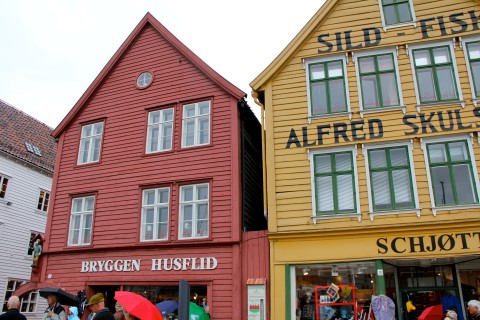 It was fun to poke around in these shops.

Across from the buildings was an open air fish market.  There was all sorts of fresh seafood and other foods available for purchase there, in addition to trinkets, tee-shirts and animal skins.  The economy in this country is very strong, so the items for sale were rather pricey, so we didn’t get much.  I think we’re out of room in our luggage at this point anyhow… it will be a challenge to make it all fit! 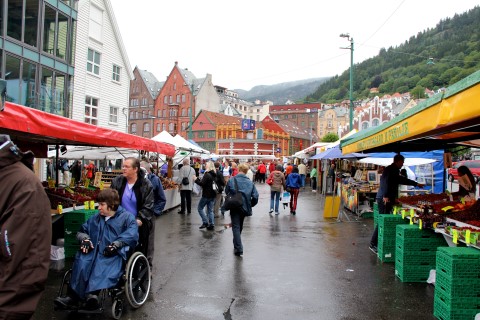 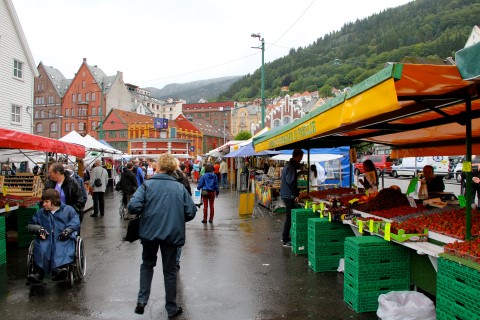 Lots of fresh produce and food too

We went on a tour that included a ride on a Funicular to the top of the mountain overlooking the Bergen harbor.  The problem was that at the time we took the tour, it was misty and rainy and we didn’t have a very good view from the top.  It was quite obvious though, that on a clear day, the view would be quite spectacular! 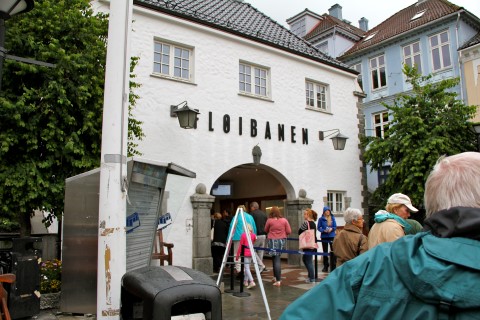 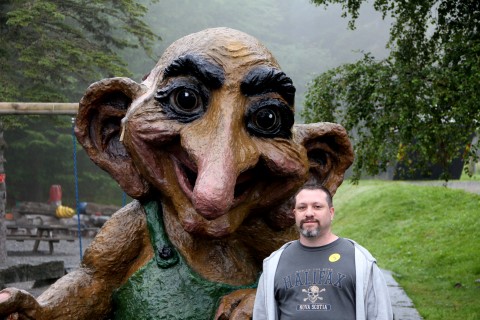 We met another troll at the top of the hill 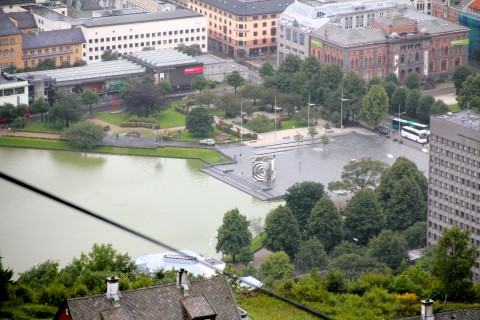 the view as we ascended the hill

View from the top of the hill…wish it had been better weather! 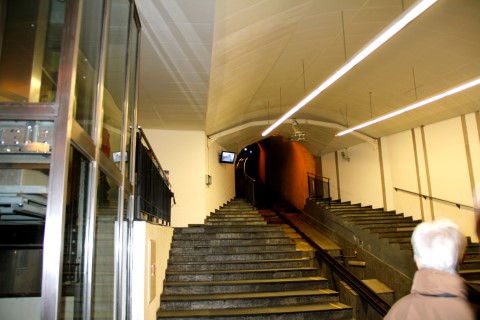 The station at the bottom of the hill 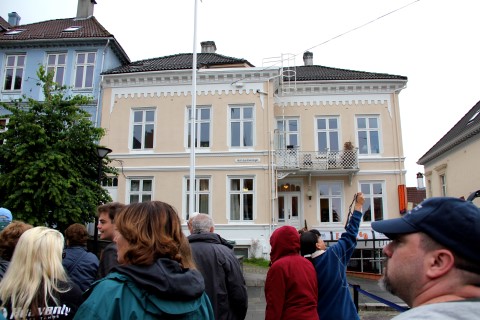 Some of the local architecture

After the Funicular ride, we were taken on a bus tour of the surrounding city.  This tour stopped at the waterfront where we split off from our tour and explored on our own.  We found an interesting castle and some beautiful parks, and some fun shops to poke around in. 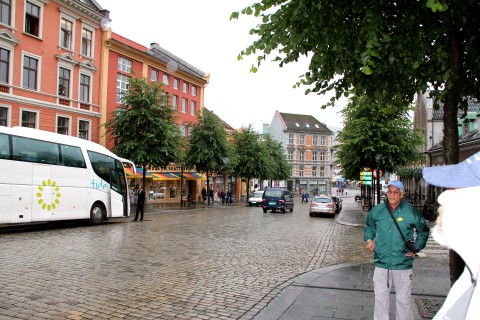 More buildings in the city 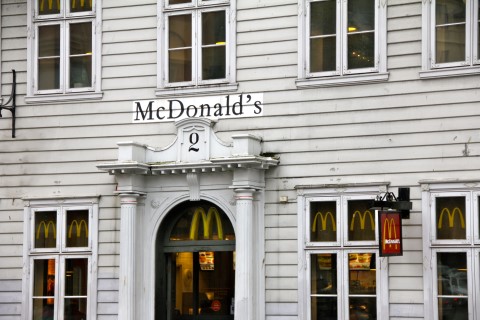 Even the McDonald’s is fancy!

All in all, we enjoyed the city quite a bit and would recommend that people visit here.  We probably wouldn’t recommend our tour though, people could easily explore on their own and experience the better parts of the tour.

Tonight is our 5th Wedding Anniversary.  We look forward to visiting with our dinner-mates and hearing their adventures for the day.

Tomorrow we visit another port in Norway, but it’s not nearly as big of a city as this one.

Adam’s Comments: This was my favorite port! There’s just so much to do and see here. A lot of other ports we did we came back to the ship earlier because there wasn’t much else to do or see (or if there was – it was too far away to get to it in time before the ship left). However all sorts of things were going on here and there is lots to see. Weather was cool and misty but I prefer that over sunny and hot.