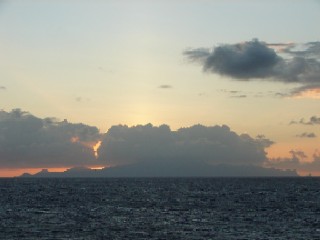 Good morning! It’s a beautiful day and we’re scheduled to go ashore at Nuku Hiva. We plan to take lots of pictures today, so if this page is loading slowly.. you know why! We have an excursion planned at 8am that’s supposed to last all day. This is not a Princess sponsored excursion, rather one we found on cruisecritic.com that says it’s great! So we decided to take a chance on it – let’s hope we aren’t disappointed. 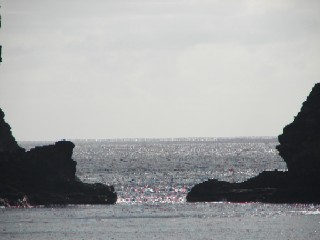 Still pulling into Nuku Hiva. This is a beautiful island.

Grabbing some breakfast while finally coming to a stop in Nuku Hiva. The tenders are preparing to take people onboard. 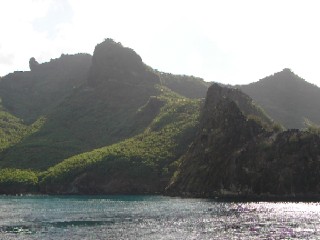 Snapped one more photo before heading down to get on the tender. Turns out we got there just in time and we were on the first tender. 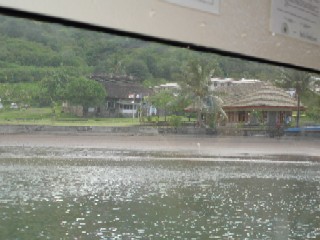 Here we are heading to the island on the tender. The waters were calm and the weather was great.

We got off the tender and saw someone holding a sign with our name on it. We went up to him and he introduced himself at Phillipe our English interpreter. He explained to us that overnight there was a huge rockslide and it was blocking the main road so we’d have to do a slightly different excursion than we planned but it would still be beautiful. This concerned us a little because we are paying $140 for this tour (not including lunch) and we didn’t want to miss anything. The photo above is a map of the island and him explaining to us the alternate route. 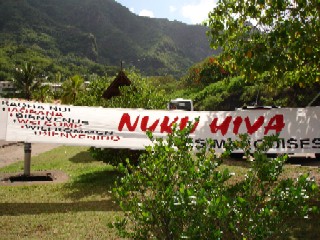 Turns out there were 2 more couples that were to be joining us, so he said that we could go ahead and walk around the area until everyone had come ashore. We wandered around the little marketplace they had set up for a while. 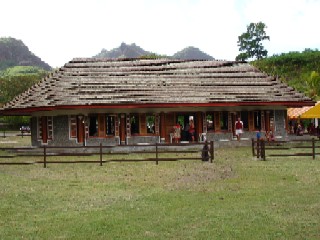 This is one of the buildings where people were selling items. We didn’t buy anything. Everything is amazingly overpriced. Little tiny idol statues carved out of wood were at least $50 and they went all the way up to $500. 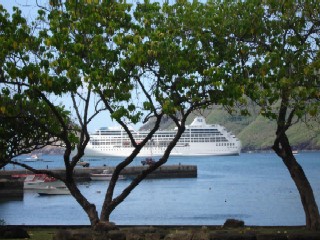 This was our view from where we were standing and waiting. 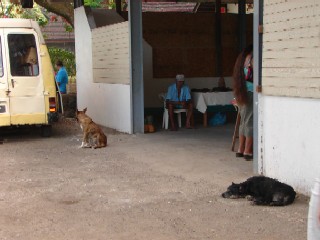 Dogs are all over the place, as well as chickens and pigs. None of the locals seem to care much about these dogs and the dogs were not friendly. Most of the dogs we saw were very thin and not in very good health. 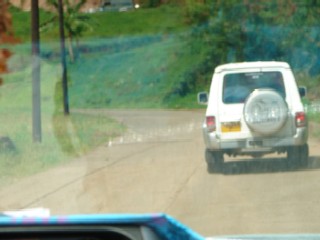 Finally we are on our way! Unfortunately because there was 3 couples and only 1 English speaking guide he had to split up between vehicles throughout the day. We were paying for a full day tour with an English speaking guide, and we only got him half the time. This was sort of a disappointment but we were determined to have a great time! 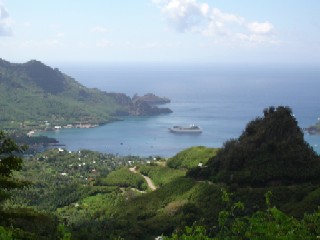 We drove to the top of this lookout point and took some photos of this amazing view. That’s our ship way down there. 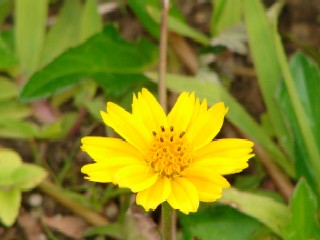 There was beautiful flowers and fruits growing all over the place. It was really amazing.

We then drove to another lookout point. That’s our ship was down there on the lower left in the water. This was a really nice picnic area that was built by the folks who filmed Survivor. When they filmed it here in Tahiti a couple of years ago they built all sorts of improvements around the island as a thank you for letting them film there. Our guide was unimpressed and felt that them coming to the island wound up doing more bad than good. 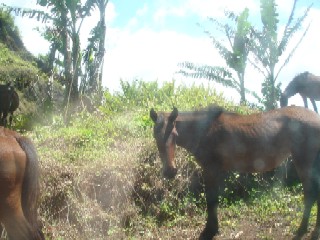 Although not as common as dogs, pigs, or chickens we would occasionally run across some wild horses. These were standing along the roadside as we drove. 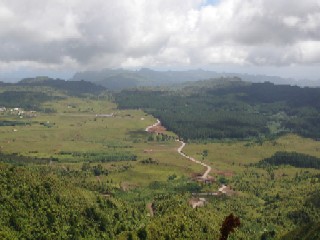 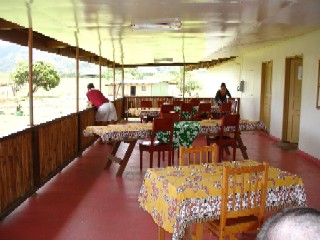 Now, apparently, it was time for lunch. We didn’t even know it. We just pulled up to this place and the guide said to get out and use the restroom if we needed to. THEN he mentioned they were getting food ready and we would be eating. This was only a couple of hours into the tour and nobody was really all that hungry yet, but it’s ok.. we’d eat a light lunch and be on our way.. or so we thought. 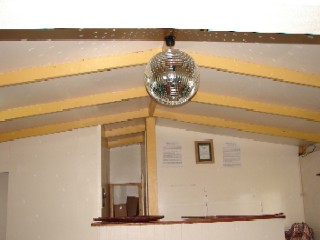 An interesting thing about this island is it seems so primitive but then we went into this building and there was this disco ball, Bose speakers, and a complete Karaoke system. We say lots of natives with cell phones and our tour guide said he had dial up internet at his home. 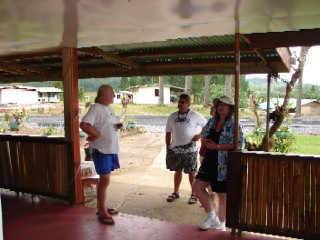 Here’s a shot of our tour guide on the left. He was from Wales, England. He was sort of a snapping guy and told tales of woe the entire trip about how everyone was trying to rip him off and everyone hated him and his wife left him so he got on a boat and sailed away all over the world. Frankly his stories were possible, but I quickly began to doubt anything this guy was telling me. I wonder if the road was really washed out this morning? 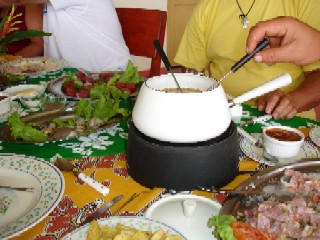 Time to eat! The lunch was served “Fondue” style where you dip the meat or fish you want into boiling oil and then when it’s cooked to your satisfaction you eat it. There was beef, tuna, salmon, even some lobster. 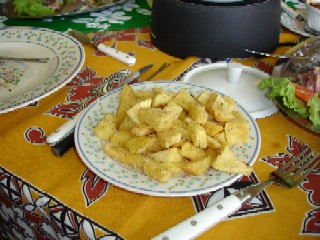 On the side was some breadfruit. Overall lunch was good but not very much food even though we weren’t very hungry. There were tons of flies landing on the food and that made it a bit annoying but overall it wasn’t that bad.

That’s when the bad news came. According to the bill when split up between the 6 of us (not including the tour guide and the 2 drivers) the bill came to $70 (American) EACH. That’s right that glorious meal came to to a total of $420! To make a long story short, we refused to pay such a ridiculous amount. Then, according to our guide, they made a mistake and charged us too much for something and that dropped the bill down to $35 each. That was still WAY too much and our ever-honest guide said that he didn’t want to get involved because he’s just giving the tour but not in charge of anything (one of the drivers of the trucks was in charge, and he only spoke Tahitian). It turns out that this restaurant was owned by the sister of the guy in charge of the tour. Go figure, isn’t that amazing? Odd I think that the main road on the island was washed out and the restaurant we were supposed to go that we were told about when we booked this tour we just weren’t able to get to. Adam felt this was a very lame attempt to rip us off and he wasn’t having any of it. They said they’d figure out the price for everything at the end of the tour. 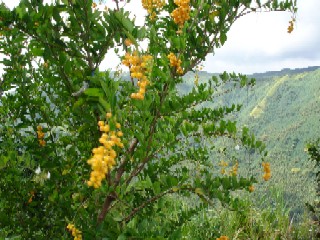 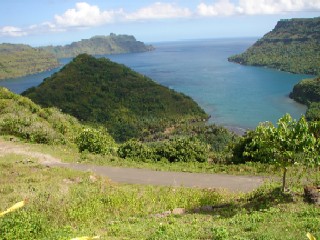 Some more beautiful pictures. The last picture is the a photo of where Survivor was filmed. 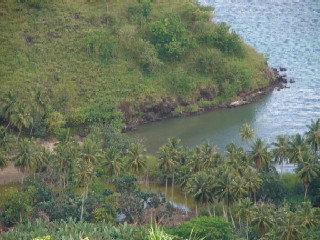 A close-up of the Survivor area. It’s all been taken down now but you can pretty much tell where the camps were and all that. There’s a road and houses not at all far away from it, but the survivor folks weren’t allowed in those areas.. obviously. 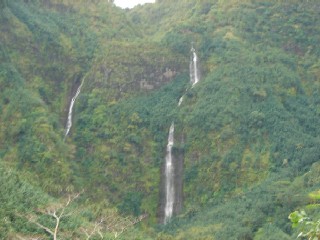 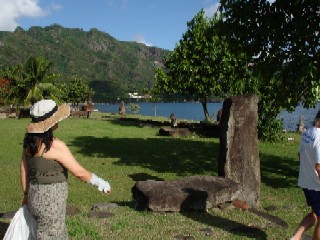 Next we went to a Tahitian temple area where they had lots of stone idols and it was a gathering place where they did their daily chores and prayed to their gods. 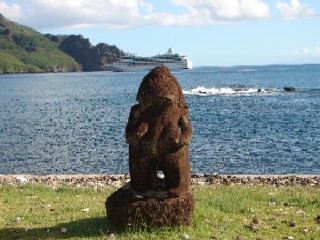 One of their idols with our ship in the background. 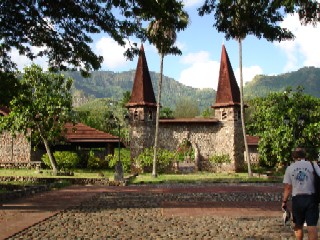 The Catholics came and built their churches all over the island and converted the citizens from their previous religion (Tahitian Paganism), to Christianity. This is a beautiful church. 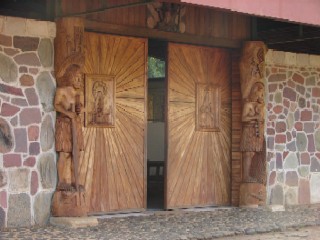 These are amazingly carved wooden doors that lead into the church. 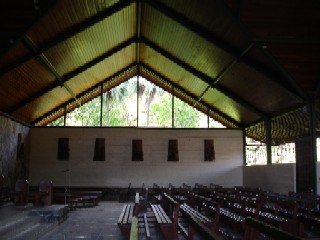 Inside the church. Wonderful wooden carvings were all along the walls, they had incredible detail.

One of the wooden carvings on the wall. 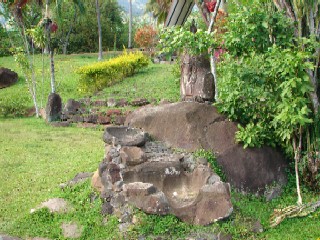 This is an old Tahitian monument. Apparently after a human sacrifice, the head of the victim was put on the bowl at the top and the blood would run down into a pool of water in the bottom part and the water with the blood was used for all sorts of Tahitian rituals.

And with that, it was time to head back to the ship. We pulled up to port and paid the $140 for the tour as was agreed upon, plus we tipped the tour guide $10 and the drive of our vehicle $5. We offered to pay $25 each for lunch but the guy running the show wouldn’t accept  – we guess because of the “confusion”. Whatever. We weren’t in any mood to spend any more time with this guide, so we boarded our tender and went back to the boat. We look at it as we were not given the tour we were promised, were given a tour guide that only was with us half the time, the guide wasn’t exactly “friendly” as we were told he would be (he was rather abrupt, and rude). So we were satisfied paying what we paid. Another couple paid exactly what we did and another couple forced them to take $25 each for lunch. All in all I don’t think they made as much as they wanted to, we didn’t get the tour we wanted to, and the day just didn’t go as well as desired. Still we made the best of it and got some great photos and did see a lot more of the island than we would have if we had gone on another tour. 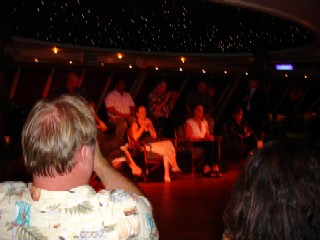 The sun was scorching all day long and we were exhausted. We went back to the ship and showered, watched a great dance show called “Ports of Call” and then went to dinner. Next we watched the “Newlywed / Not so Newlywed game” (pictured above) and it was pretty funny, but not quite as funny as previous ones we had seen. The oldest couple won the game and got a bottle of Champaign.

Tomorrow we dock early (7am) at Hiva Oa.