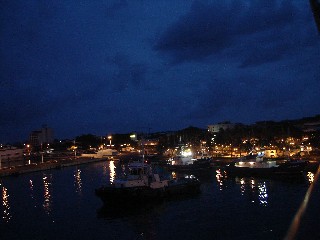 It’s 4am and Adam is up and shooting pictures. The Paul Gaugin which had been docked right across from us had sneaked out overnight. Now, we’re being slowly pushed out by the tugboats.

It took a good hour for them to finally get us going, but at around 5am we were on our way. Here’s a photo of the tugboat turning around and heading back to Papeete. Bye Bye Tahiti! 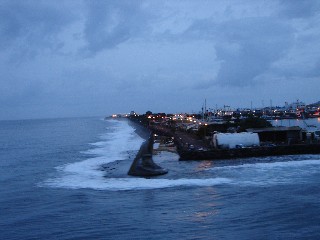 Here we are leaving the friendly waters of the port, and heading into open sea.

Time for breakfast! We went to the breakfast Buffet, and then came back to the cabin while the boat was docking in Moorea.

If you look at the bridge of the Tahitian Princess on the web, you will see this view. The camera is mounted on this, and the antenna broadcasts the signal.

We had some time before we could go ashore so we relaxed in the room for a bit. 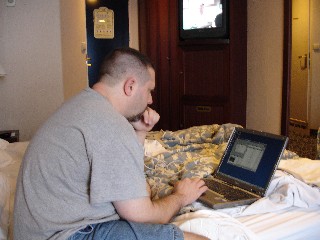 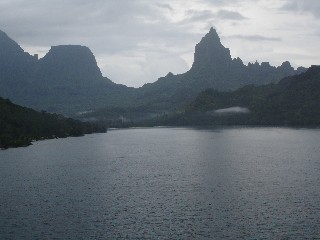 Pulling into beautiful Moorea. It’s raining pretty heavy – We hope it lets up. Unfortunately, a bunch of tours are being cancelled because of the rain. Lucky for us our excursion, 4×4 Jeep excursion is still on! We met at 8am in the Tahitian Lounge where were were to all meet to go ashore in one of the tenders provided. There is no port at Moorea. 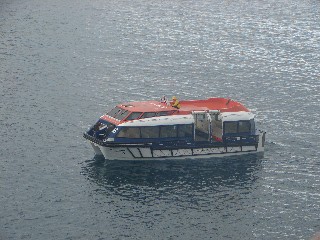 There’s the tender coming to pick us up. The tender is actually a boat from the ship which they dropped into the water. They had a couple of these running back and forth to the island.

Susan on the tender. 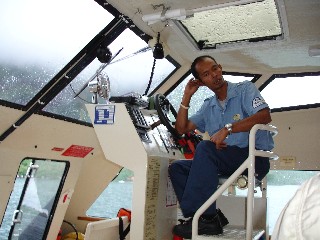 Here’s our tender driver. He looks thrilled, doesn’t he? 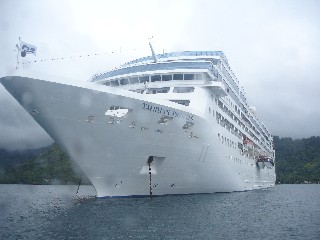 Our ship as we pulled away in the tender. As you can see, it’s still raining. 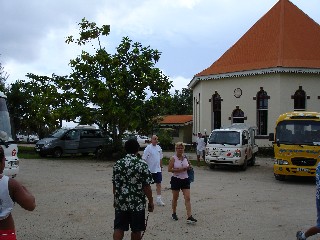 Here we are in Morea! The building you are looking at is the church. There some small huts here where locals were selling their wares, but we were in a hurry to make our excursion so we didn’t stop to poke around right now. 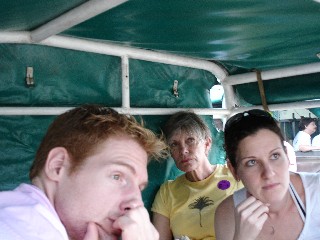 On our 4×4 jeep excursion! Good news – the rain has stopped! Bad news was that they tried to cram 8 of us in the back of this 4×4 and it was very uncomfortable and extremely bumpy. Luckily a couple (the younger folks in this photo) later agreed to ride in the cab of the truck instead of the back so we all had lots more room. This was an extremely wild ride as the truck barely fit on the road and with the wet dirt roads and everything we were sliding all over. But we made it to a very nice outlook looking over the island. 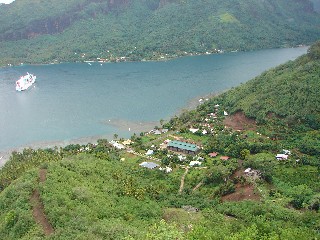 A beautiful view! That’s our ship on the left. While we were up here we were told a story by our guide about the history of the island and the lore.

Adam on top of the mountain. 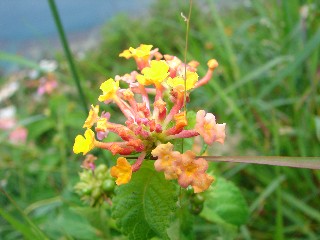 Native flowers like this one were growing all around us. It’s amazing what beautiful stuff grows all around this island and it’s all just naturally there. Nobody needs to plant or water them.

After driving down the mountain (which was actually the top of a volcano crater) we drove down to the center of the crater. 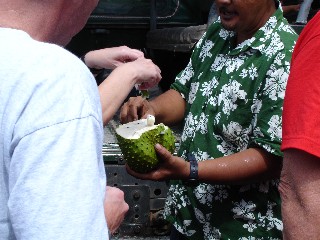 One of the guides pulled over and picked this melon looking fruit (but with sharp thorns all over it) and then cut it up. They called it “Sour Soap” and it had a very slimy and rubbery consistency. It tasted very sour at first but after a moment it was very very sweet. Adam loved it, Susan didn’t like it. Next they cut up fresh pineapple they picked right from a nearby field. 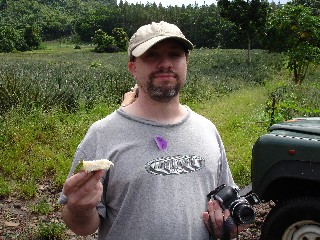 Next we drove to another high point that overlooked a beautiful valley. 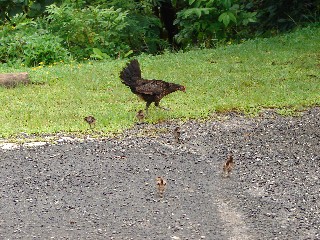 There are chickens all over the place. During this stop we were treated to this mother chicken and her chicks. She seemed pretty oblivious to all the people around. 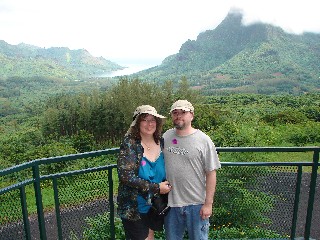 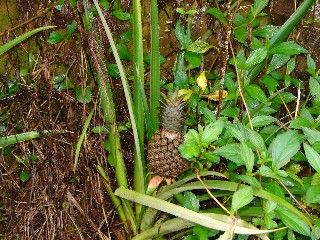 Pineapples like this were growing all over. This was taken on the side of a road.

Now it was time to move on to a Tahitian temple. This temple was used in times past as a place of worship, and sacrifice (including human – EEK!). 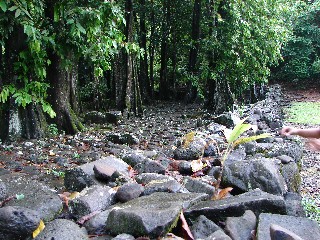 There wasn’t much left to the temple, just a bunch of rocks still piled up around it. While we were there one of the guides told us a story about how the Christians came and changed their way of doing things. He showed us how important nature was to the Tahitian people by demonstrating what can be done with a Kaukooee nut, a flower, and a tree branch. With the tree branch he stripped some of the inside material and made a grass skirt out of it as a demonstration. 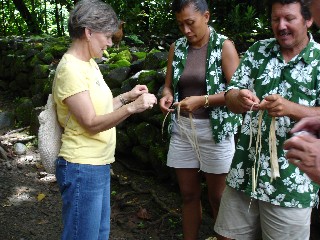 Here’s the guide making the grass skirt. It was a LOT too small, but he was just demonstrating. 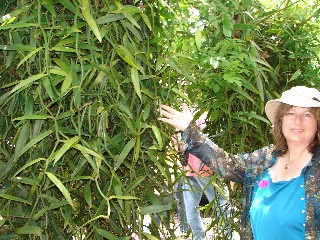 Next we stopped at a farm school and the tour guides told us all about vanilla plants and how they are harvested. Here’s Susan holding a vanilla plant. We’ll learn a lot more about this in Rangoria later in the cruise. 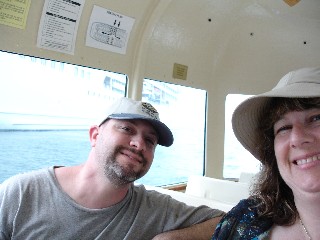 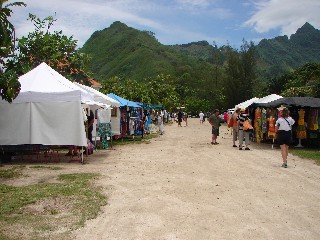 Here are the tents. They are along the main road where the tender drops you off. It was mostly all the same stuff and nothing we were really interested in – so we decided to head back to the ship and take a dip in the pool and relax. The pool was nice and warm, but a bit crowded. After swimming we layed on some deck chairs for a couple of hours. However as the time ran on it was 4:30 and now it was time for Muster! 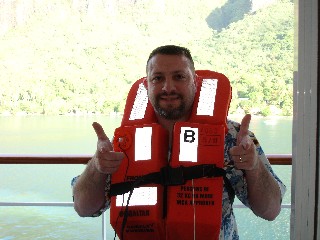 Muster went off quickly and easily (took about 45 minutes) and then we went back to the cabin to sit on the deck as we pulled away from Morea. 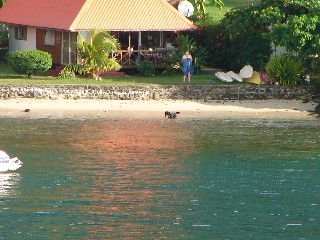 As we slowly started pulling away from Morea  – a photo of a local playing with her dog. 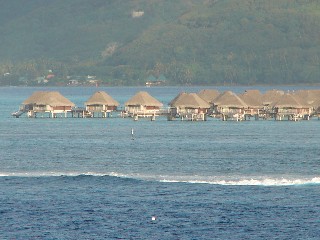 Some huts that are right over the ocean. You can stay in these overnight but people on the ship were saying they are typically $300 a night. Wow.

Time for dinner! We met the folks at our table and they all seemed very nice. Everyone was a returning cruiser, one couple had been on several dozen cruises. A great group of folks and we look forward to spending many more dinners with them. We were getting ready to leave and then all of a sudden the staff came by with a cake that said “Happy Anniversary!”, we told them we were on our honeymoon and instead of singing “Happy Anniversary to you..” they sang “Happy Honeymoon to you..” (pretty good how they changed it on the fly like that). We’re still not sure how that got all mixed up. 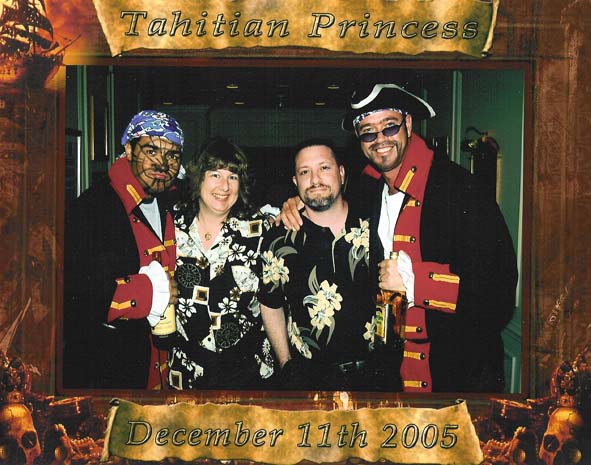 On the way out of the restaurant we were accosted by pirates!

Now it was time for a show. We went to the late showing in the Cabaret Lounge and saw some dancing, a very short magic show (it was a preview for an upcoming main show later in the cruise), and introductions from the staff about all the goods and services they could provide to us during the cruise. It was very entertaining. Looking forward to 2 days at sea! We hope to get in a lot of relaxation and have some fun.