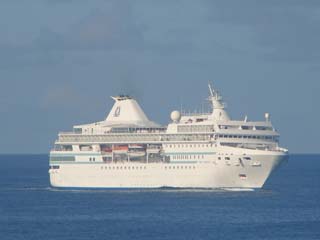 Cruising into Bora Bora and there’s the Paul Gaugin again. Turns out it was going to the same place. 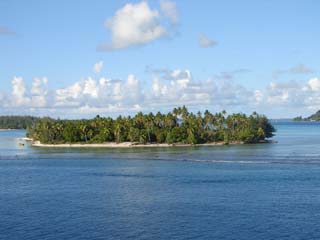 We had breakfast as we watched the ship pull into Bora Bora. We’d take a tender from here to shore – where we would go on our Aqua Safari! 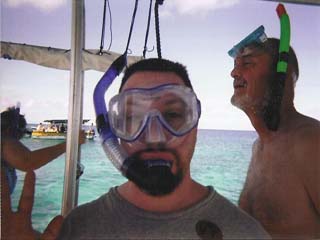 The aqua safari was done in groups of 6 and there were 16 of us, so we decided to go the last round and get in some snorkeling while we waited. 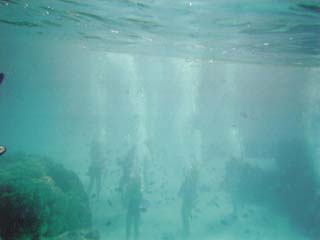 When we looked up the Aqua Safari on the web prior to booking it, we couldn’t really get find any solid explanation of exactly what it is. Basically you get a big helmet put over you that’s pumping in oxygen and then you just walk around the bottom of the ocean looking at stuff. Here’s a shot we took while snorkeling at the people already down there. 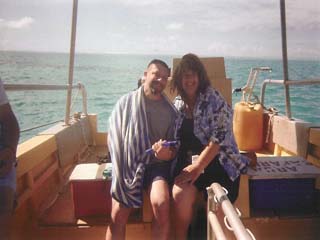 After snorkeling we waited our turn to do the Aqua Safari.

Here we go into our Aqua diving helmets and down below! It felt just like air conditioning and there were no problems at all! 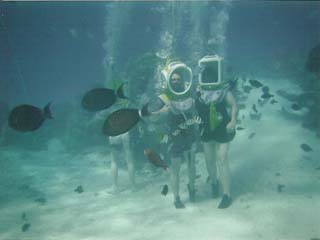 There we are cruising all around the bottom of the ocean. Every time someone would try and shoot a picture of us a big fish would swim in the way. Finally, we got one. 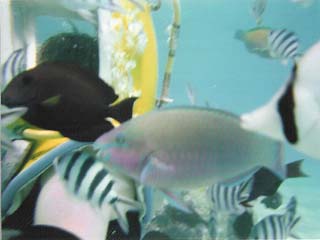 This is the view from the helmet. Fish swim right up to you. We had been given some bread to feed the fish and then they swarm all around you. 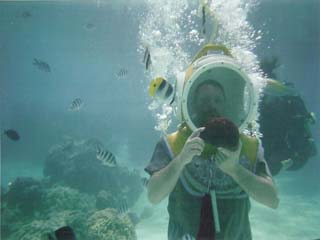 Not sure what this round thing was in the water but we were passing it around. Some sort of sea anemone. 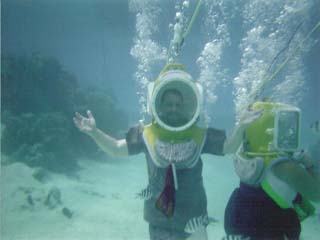 We had the best time! Unfortunately it was only for 30 minutes and then we had to go back up.

We went back to the ship for lunch, and then back to Bora Bora to shop around.

What a beautiful island. 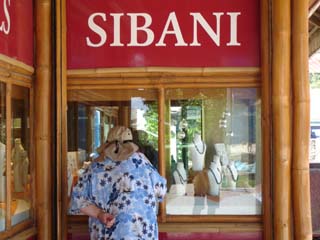 Susan looking in one of the local jewelry stores. Unlike most of the previous islands this island was not quite as primitive and we were happy that some of the stores had air conditioning. Like the other islands we visited, it was scorching hot. 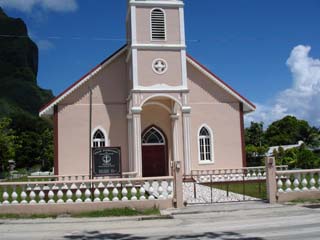 We walked by this pretty church that was in town and took this picture. We really enjoyed it here, but there weren’t that many stores near where we were and our time left was limited so we went back to the ship to… 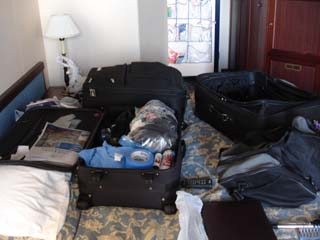 pack. Isn’t that depressing? Already!!? All our stuff had to be outside of our stateroom (except for carryon) by 10pm. Ugh! We have a show at 7, dinner at 8:30, and then a passenger talent show at 10:15 so we have to start packing early in the day.

We got our packing done a little faster than planned and there was an announcement to meet the Cruise Director in the Tahitian lounge where they would be interviewing him and the audience could ask questions. Our cruise director’s name is Stuart Mac and we enjoyed his morning TV show and the events he put on so we decided to attend. As it turns out it was only us and 1 other person that showed up! He explained that he probably shouldn’t have even planned his “meet the cruise director” show because most people were busy packing. He was a nice guy and we spoke with him for about 30 minutes. 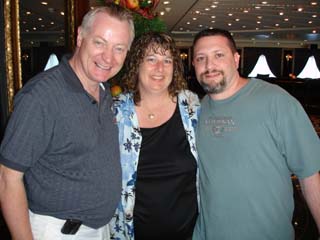 Here was are with our cruise director, Stuart Mac. 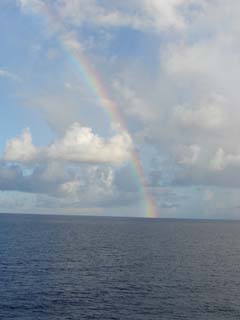 We had a few moments before the next show and we noticed this amazing rainbow outside as we left Bora Bora on our way back to Papeete.

All packed up and ready to go! Oh yeah, the art framing event is going on. We better get down there to get some frames for the art we bought earlier. 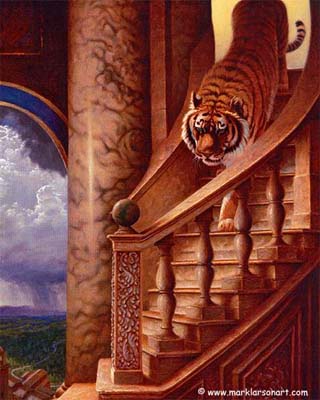 That’s when Susan spied this beautiful painting. It’s called “The Messenger”. We both loved it and bought it. A final honeymoon remembrance. It should be shipped within 6 weeks and nicely framed. We’ve got the perfect spot for it.

Time for the grand finale show! They brought out the 3 main entertainers that were onboard (magician, singer, and comedian) and they all did a little bit more of their acts. It was a decent show but we thought a grand finale would be more grand! It certainly seemed like most of the entertainment staff has vanished on this last day – most probably getting ready for the upcoming Christmas cruise.

As we slowly sailed away from Bora Bora we took this picture. Next it was time for dinner where we ate and said goodbye to the wonderful people we were honored to have dinner with every night. There’s good and bad to assigned dinner times on cruise ships, but when you get a fine group of people together like we had it just makes all the bad go away. We’d love to visit some of the friends we have made since they are no too far away – and for those that are far away we just may plan another cruise to meet up with them again. For all of you reading this that were apart of making our cruise so great, we thank you so much.

Time for the passenger talent show! We had a few couples who did some nice dancing, 2 older guys telling jokes, and a couple of piano players. 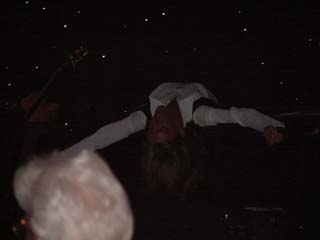 The 2 older guys telling jokes were taking a long time setting their jokes up so the band leader decided to have some fun. Here she is acting bored to death on top of the piano. It was all in good fun.

Tomorrow we dock earlier in Papeete where we plan to look around in town and get some goodies before we fly home.