The first day of our cruise actually includes the night before. We had a 10:30pm scheduled flight out of LAX, arriving in Tahiti at around 5:30am. So, LAX is where our trip begins. Please ignore the date on the pictures, we corrected this later in the trip and then decided to shut off the date all together. 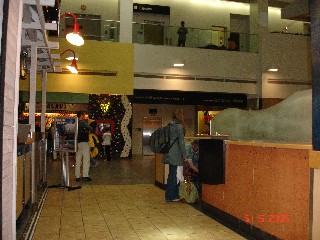 That’s beautiful LAX. Well, maybe not so beautiful. I didn’t take a photo of the security people as they appeared grumpy. All in all it went pretty smoothly here. We had some time to kill so we decided to seek out some high quality food to start out trip right. 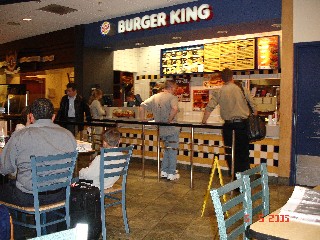 That’s right! Dinner with the King! Got to eat all this good food before being subjected to that cruise food. 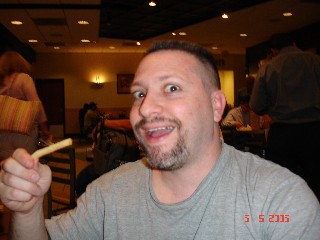 As fate would have it, our fries passed along a sign from Tahitian gods! 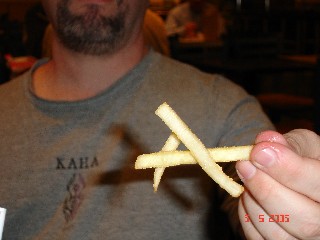 What could is all mean? The 3-fry symbol was trying to tell us something? We may never know!

Anyhow – it was time get on board. Unfortunately the flight on Air New Zealand wasn’t very good. We had a lot of turbulence and an infant a few seats ahead of us that was very cranky. Neither of us got any sleep and we had certainly tried to. The seats were older and not comfortable, and the movie was on a main viewing screen instead of the little personal ones we were hoping for. Service was very good, however. Steak or Chicken, Tea, Wine, all complimentary. Nice. 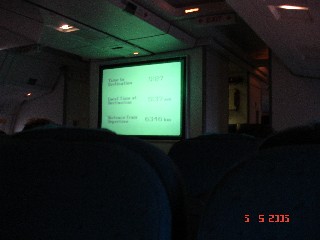 That’s our view from our seat to the main view-screen. One nice thing they had was our current speed, position, and all that stuff showing on the screen when the movies were over. 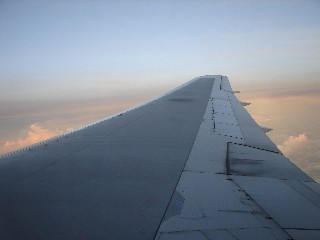 Finally – morning in Tahiti! This was the view right from our window seat. This was one of the finest 767-300 wings I’ve ever seen. I guess. 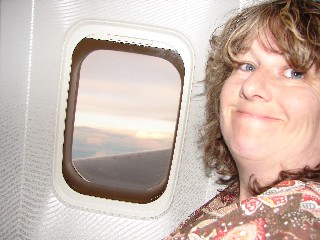 Susan’s starting to get excited! We are almost there! Wahoo! 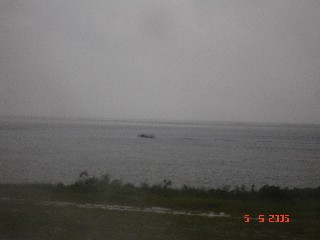 Landing in Tahiti! This is a view from the runway as we were working out way to the stairs. It is absolutely pouring down rain. We had to walk down the stairs and to a building in order to go through customs. It wasn’t that long of a walk but it was raining really hard. Fortunately the airline provided us with cheap-o plastic sheets to wear. 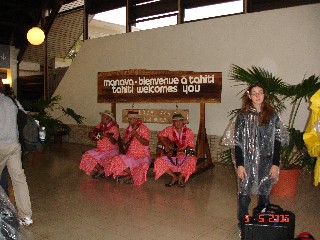 Here’s the Tahitian pink flamingo trio greeting us. Oh, that’s not me in the picture. 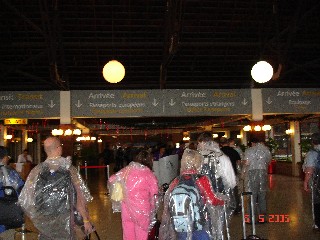 In line going through customs. This took a while but actually went pretty smoothly. The customs agent didn’t even ask us anything.

We got met by the Princess Cruises representative who said we could leave all our bags with him while we explored the airport and got some coffee while waiting for our transportation to the dock. 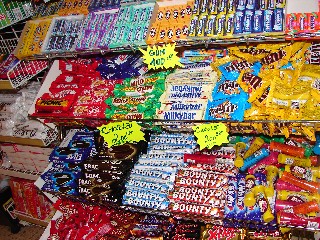 Here are some of the candy for sale at the airport. Who would eat a candy bar called FRAC? 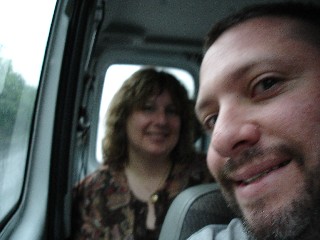 Finally on the bus heading to the dock. 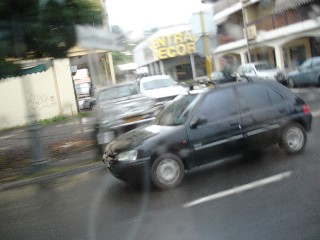 This is a great picture. I took it on the way to the dock. For the most part downtown Papetee is like any other downtown with lots of traffic people on the go. Doesn’t it look like a collision is about to take place here? 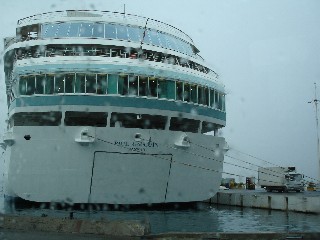 Finally! The ship! Isn’t it beautiful? HEY! That’s not OUR ship, that’s the Paul Gaugin. 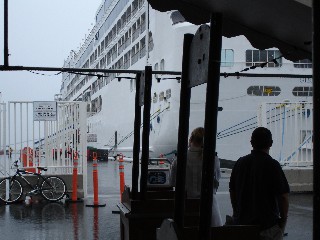 There’s our ship. This is the area where you check in to get on board, it was currently closed. 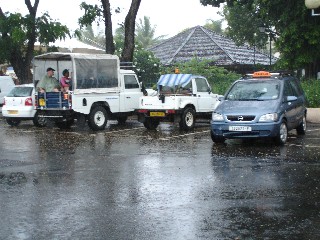 We got dropped off here, at the Princess Cruises dock area. Unfortunately, we couldn’t get on board yet. They didn’t allow boarding until 11:30 and it was only 9:00. We checked in our luggage and decided to head across to check out the shops. That’s when the sky opened up and pour down buckets of rain. We were forced to retreat back to a covered tent they had set up. 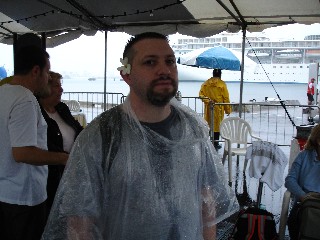 Here I am completely soaked. About an hour later the rain let up enough for us to finally make it to the marketplace, and look around in all the shops. 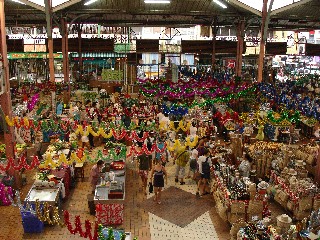 Here’s a couple of photos of the marketplace. There was all sorts of stuff to see here, and the place was huge. We decided we’d come back later and buy some flowers for our cabin. For now, we were just killing time. 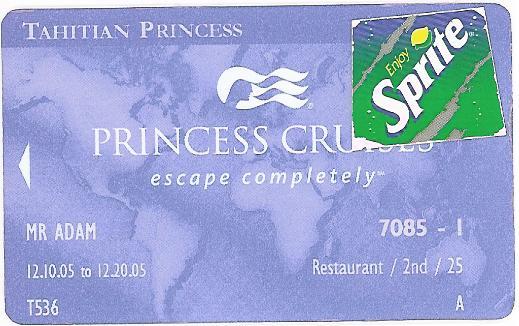 Checking in – We received our cruise cards! The Sprite sticker is placed on the card once you enter the “soda” program for $40 for the whole cruise. 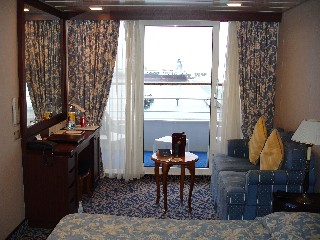 Finally we got all checked in around 11:30. We went to the buffet on the ship and had lunch. Then our room was ready at 1:30. Here it is! It’s great! It’s wonderful! It has a bed! Time to take a nap. We were really exhausted. After a few hours of sleep we got up and ran back over to the marketplace to get the flowers.

Aren’t these amazing? Only $15! It really added to the room. We then explored the ship. The Tahitian Princess is a smaller cruise ship than other ships we’ve been on. The Tahitian Lounge is the biggest show-room on board and it’s very nice but rather small. 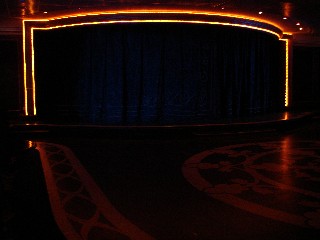 It’s almost showtime! Here’s a shot of the stage. A Tahitian Dance show is about to start. 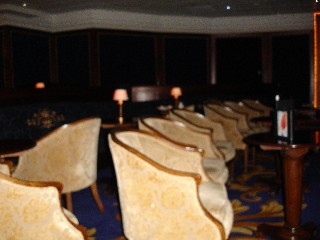 It wasn’t very crowded at all. A good portion of the ship hadn’t even arrived yet. Flights got in very late, and we weren’t scheduled to disembark until 4am. 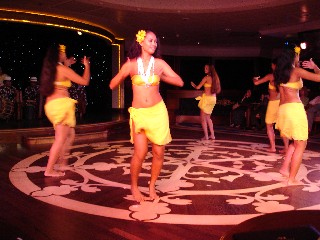 Here’s a couple of photos of the Tahitian Dance show. It was well done. By now we were very tired and ready for bed. We dock tomorrow morning at 8am and have a shore excursion in Moorea!