Today is a day at sea. We got up pretty early and ate at the buffet and then on to the “Discover Port & Shopping show” where they show you all the stuff you can buy at the upcoming ports. It’s basically a 2 hour commercial but it is at least interesting to know what is coming up. In one of the ports there is a Pirate Store that sells nothing but Pirate stuff.. Adam is all over that! They were giving away all sorts of prizes but the grand prize
was a piece of jewelry with diamonds and of all the people there Susan won!! 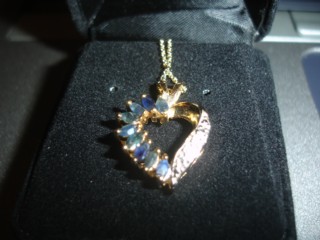 That’s the jewelry that Susan won! It’s got diamonds on the right side and sapphires on the left with 14k gold. Beautiful eh? She likes it a lot.

After that we decided to go back to the room and relax for a little while before heading down to the Art auction. 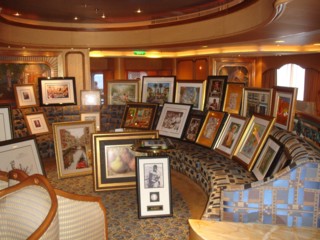 Some of the artwork that was available.

The art auction wasn’t very exciting on this ship.. the auctioneer didn’t really motivate the crowd like we have seen on other ships and we were sort of bored with it. Tomorrow morning we’ll look at what new art is brought out and perhaps we will go back.

After that it was time to get ready for formal night. When we boarded the ship remember we said it was raining? Well it turns out it got a bunch of people’s stuff soaking wet including Art’s suit! So while the rest of us dressed up he had to go with shorts and a t-shirt. Nobody really seemed to mind though and we had a really nice dinner. 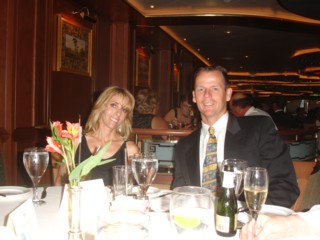 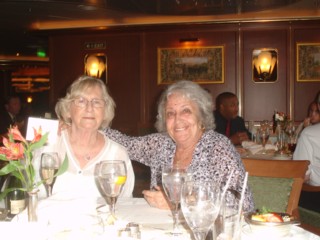 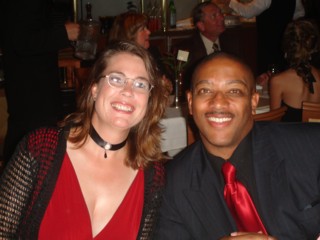 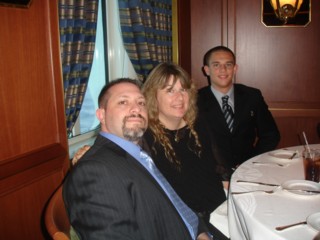 There’s the whole gang of us at dinner. Aren’t we a great family?

After that we went to see the show “Motor City – A salute to Motown”. 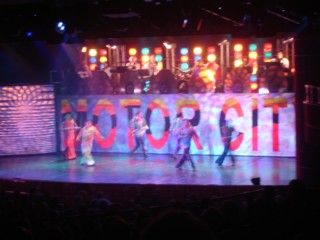 It was a really good show with good music and dancing and everyone seemed to enjoy it. 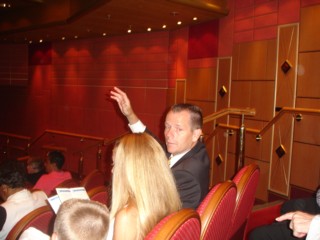 Jack and Allison enjoying the show. Steve looks like he needs another beer.

After that we went to see a Mentalist and Illusionist names Wayne Hoffman. His show was really good as he seemed to read people’s minds and do all sorts of neat things. Unfortunately the show was in a lounge meant for only a few hundred people and probably close to a 1000 tried to squeeze in and it was not comfortable but even still the show was good.

Next we decided to try out luck in the casino since it was a non-smoking night. We didn’t win but we tried! Susan had fun playing the penny slots and seemed to be doing ok but Adam wasn’t winning. Maybe later in the cruise. Time for bed now – looking for another exciting day at sea tomorrow!